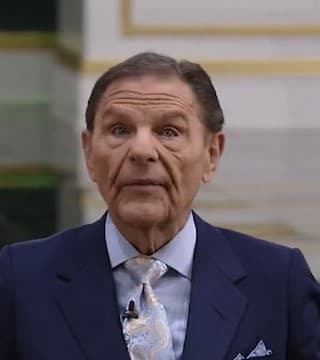 If only saith the Lord, my people will believe that, receiving healing and deliverance and financial victory would be so easy. The struggle is over. Hallelujah. The Lamb took my sins in his own body, on the tree and the lamb by the blood stripes on the back of that lamb so that I'm dead to sin. I'm dead to sin. I live under righteousness because by stripes I was healed 2100 years ago. And I'll tell you something else my brother and my sister, it goes beyond that. When he said it is finished, redemption was not finished. It still had three days and nights to go.

What was finished then? Who said that? What do you mean stealing my thunder like that? That's exactly right. That old covenant. It was, it actually, it actually went out. It went out when that angel ripped that big curtain in half and the Holy of Holies was exposed. For the coming high priest of the heavenly Holy of Holies was hanging on that cross and then he went to hell. So, now nobody has to go. Nobody has to go. Hallelujah. Remember he said to Mary, don't touch me, I haven't yet ascend it to my father and your father. My father and your father. He went before and stood in the heavenly courts of justice. Yeah, a sin free, born again man. And God called him righteous.

Take the time to read the first chapter of the book of Hebrews. All of it is in there. The very words that he said to him, are in there. Again, I will be a father to him and again, he'll be my son. That's what Jesus was crying over in that garden. He was crying over it. He knew he's about to be separated from his father. Yet nevertheless, he said, your will be done. How did that get so strong? Because there came a time when God needed Abraham's only begotten son. Now, once reading the book of Hebrews, are you kidding me?

People said, Oh, it was so terrible. It was so well, you know it was, it was rough on him. But Hey, wait a minute. Now. He was in covenant with God as a father, of many nations, and if I kill this one, he's got to raise him from the dead. It says so in the book of Hebrews, he received him, raised from the dead in a figure he knew in his heart, I think he was a little disappointed. In the first place, he's God, he's God, personal covenant brother. He fully intended to kill that boy and burn him and watch God raised him out of those ashes because he told his servant down at the base of that mountain, The lad and I will be back.

Now, Issac was so covenant taught and had so much faith in the covenant of his dad and his dad's God that didn't argue in the least when his daddy tied him on that sacrificial log. And he said, daddy, where's the lamb? He said, the Lord will provide. So he just laid back there and said, well, let her have them. And he raised the knife and the boy never said anything. And the angel of the covenant said, stay your hand.

Now let me add some words in God's mouth. Stay your hand. Because now I'm covenant bound to offer my only son. And he's gonna come to me and say, can this cup pass from them. But Jesus didn't even give the father time to answer. He's nevertheless, your will be done. And he knew what that will was, not because of his foreknowledge. No. He got it out of the scriptures. Found himself in the book of Isaiah. Did he not? Oh, Hallelujah! Romans chapter four and I'll close up. We get the insight in the 17th verse, as it is written, I have made thee a father of many nations before him, or like him, whom he believed even...

Now we're for referring to that covenant. Even El Shaddai, even the almighty God. Who makes alive the dead and calls those things which be not as though they were, who against hope, believed in hope that he might become the father of many nations according to that which was spoken, so shall thy seed be being not weak in faith. He considered not his own body now dead when he was about a hundred years old, neither yet the deadness of Sarah's womb and staggered not at those covenant promises.

I consider not my body 83 years old. I consider it not in the name of Jesus. But only that which God had. And I have a personal covenant with God to live 120 years on this earth. Now, where did I get that? Genesis 6:3, and by the law and the rule that all Bible scholars adhere to. The first mentioned of anything in the scriptures. Then that first mention becomes primary to the meaning and reference all the way through the Bible. God did not say threescore and ten four score for strength. That was a curse that came on a disobedient people in the desert and people have adopted it all these years as the time I'm supposed to die. It was God that said, I've put up with man long as I'm going to. He's only human. He's only flesh.

Now his days be 120 years. That means that everywhere you see your something referenced, like in the 91st Psalm with long life, he will satisfy me. Well, we don't have a right anymore being Bible people, We don't have a right anymore to make up our minds what he meant by long life. He said it in Genesis, it's certainly true in Psalms. I don't see how anybody can do that. That's cause you don't know anything about covenant. Amen. And I won't go through all the things that happened over several years time where the Lord brought me to a place where he actually said, now I already knew.

I knew I was going to live to be 92. There wasn't going to be any question about it. The Lord revealed it. And he'll reveal to you, but you're going to have to get some base under you. You don't have to live to be 120 but I sure wouldn't hang on to that 70 or 80 I'd spit in that thing's face. Oh, I've got this heart trouble. Not until December the sixth 2056 I'm not going anywhere.

Now there's one woman that'll never make it to 120 and it's Gloria. She'll only be 115 but we're going together. I'm not kidding about this one lick. If I wasn't sure about it, I certainly wouldn't say anything about it publicly, at all. Glory to God. I said glory to god. I said Glory to God. Calling those things which be not as though they were. Completely disregarding symptoms to the contrary. Abraham never attempted to reconcile those two. Yeah, but I'm too old and this old woman ain't never had any.

Now his body was dead. Right? He's a hundred years old. Have you not read the 25th chapter of Genesis? Sarah died. Abraham remarried and had six more sons and lived to be 175 years old because he learned to practice the laws of life. The laws have a blood covenant. He learned to live. They have no use in him saying, I'm just an old man. He started out doing that and God never even recognize what he said. And Sarah laughed. You see I'm an old woman. That wasn't funny to God. He said, you laughed? No no! You laughed. Okay, sir. Are you ready?