Kenneth Copeland - Have Faith in Your Covenant With God 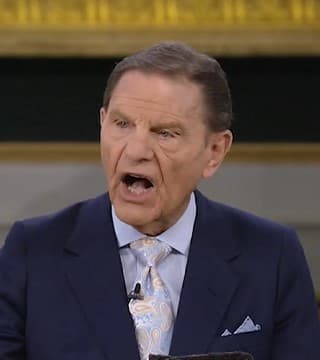 There is a friend that sticks closer than a brother. Go to the book of James chapter two. Oldest book in the new Testament written by Jesus' half-brother. Now, if you're looking at anything other than the King James, I'm embarrassed to say that it won't work. Thank you Lord. Thank you Lord Jesus. Thank you Lord Jesus. Verse 22, 2nd chapter, seest thou how faith wrought with his works and by works faith was made perfect or brought to maturity, and the scripture was fulfilled which saith Abraham believed God and it was imputed onto him for righteousness and he was called the friend of God.

Look at it. It's in capital F. This goes back like I said to the time when the British people practice covenant and they capitalized that F. What did Jesus say in that covenant room? I no longer call you servants. I call you friends. You can get healed just listening to this, because it finally dawns on you, I have a covenant of healing. Now, God is a covenant keeping God. Now you don't have the same covenant that Abraham did cause that was a nation covenant. We have the healing covenant. He also had that. That's part of it.

Now, there's two things I want to get to here. First of all, who is God? He is Jehovah Rohi. My shepherd, he is Jehovah Jireh my provider. He is Jehovah Rapha. He's the God that heals. Jehovah Tsidkenu, he is my righteousness. Jehovah Shalom, He is our peace. He is Jehovah Shammah, He is present. He will never leave us nor forsake us. He has Jehovah Nissi, He's my canopy. He's my covering. Oh, but this, this one. He is Jehovah Sabaoth. That is in the book of James and 99% of the people read it Sabbath, and it is not Sabbath at all. It is Sabaoth. It is God, the Lord of hosts.

The little book of Malachi where the tithing scriptures are. Saith the Jehovah Sabaoth 22 times, in that one little book. And it is the God of the heavenly armies. The heavenly hosts of God. That place is tithing squarely in the new Testament for here, men that die receives tithes but fair he receives them of whom it is witnessed. He lives and his name is Jesus, and Jesus is the Lord Sabaoth. Hallelujah. He said, you prove me in this saith the Lord Sabaoth, and I'll open the windows of heaven saith the Lord of hosts, and I'll pour out blessings you can't handle, more than you see any way to use, saith the Lord of hosts. Glory to God.

Now I want to settle an issue that's been a problem for a long time and then, thank you Lord. Then I have some closing remarks. Deuteronomy chapter 28, everybody in here is familiar with it. The first 14 verses the blessing of Abraham, the rest of it is the curse. Well, it says the Lord will curse you, the Lord. Well man, I don't know this. Does the Lord curse? All you have to do number one is understand covenant practice. I suggest you get the little book, "The blood covenant" by E.W. Kenyon. It is all in there. And then you can understand what is happening in this room when we receive communion. When you know my name has been changed. Melchizedek, Jesus' ministry is after the order of Melchizedek who received tithes from Abram.

These old guys knew what it meant. And Abraham didn't say, Oh no. Oh no, no, no, no, no, no. Don't say that about me. Oh, I'm just an unworthy servant. He'd rather have died than to have said that, because he would've been insulting the covenant by which he was possessive of. Oh Jesus. Look at the 27th chapter of Deuteronomy, and Moses and the priests and the Levites spoke on the all Israel saying, take heed and harken oh Israel this day, thou have become the people of the Lord thy God, Yahweh, your Elohim. Thou shall therefore obey the voice of Yahweh your Elohim, and do his commandments and his statutes, which I command thee this day.

And Moses charge the people of the same day saying, these shall stand upon Mount Gerizim to bless the people. And when you come over Jordan: Simeon, Levi, Judah, Issachar, Joseph, and Benjamin; these shall stand on Mount Ebal to curse: Reuben, Gad, Asher, Zebulun, Dan, and Naphtali.This is covenant. These two mountains are right there close together, and a priest is officiating. Here's my bottom line. Listen to me. Listen to me. Half of the covenant family on one mountain, the other on the other. And they began the practice. Mr. Kenyon said that Mr. Stanley said, we went through that ceremony and the King, their interpreters you understand, just we were blessed. Blessed of one another. I'll do this for you, I'll do this for you. Oh, whatever I have is yours if you need it.

And then the representative of, of Mr. Stanley would come in and say he should go back and say the same thing and then the interpreter would. Then they'd start picking the most. Mr. Stanley said, the most horrible curses he had ever heard anybody speak out their mouth, horrible stuff, terrible stuff. What is all of that? This and more will happen to you and your family if you break this. Now, when you just start in the 28th chapter, you don't know why that curse is in there and why it says God will bring it on you. He never intended for them to get sick. He never intended for them to get cursed. No, but this is covenant function. It had to be done.

Well, Brother Copeland, why did it have to be done? Because now we've got a priesthood and the priest of the covenant, glory to God, would bring a scape goat and lay his hands on the head of that goat and that goat would be led off into the wilderness to die for the people. Hallelujah. Think about how many horrible lies have been preached. God will make you sick. God will kill your children, because they got most of it right there in that 28 chapter of Deuteronomy and didn't have one single clue about why that was in there. Not any clue at all why it was there. The blessing is just as real as the curse.

Now Jesse, why in world did all of this have to happen? All of these things are shadows of Jesus. The lamb. The escape lamb of the new covenant. Those curses had to be pronounced and it covers every sickness, every poverty, every bad thing that could possibly happen to the human family. And it says in there in the 61st verse and every sickness and every plague not written in this book of the law, the Lord will bring on you. Yeah but, I said, yeah but, very reverently.

I don't care what you did. Redemption day is coming and all you had to do was believe it and look forward to it because a lamb is going to die. Come on. Verse 13. No, read verse 11, there's no man is justified by the law in the sight of God it's evident for the just shall live by faith. Faith in what? And faith in whom? Faith in your covenant. The covenant between El Shaddai almighty God, the covenant between Jehovah Rafa and his son, Jehovah Rafa in the flesh. Christ the Messiah, the one God sent the anointed one has redeemed. Has redeemed. Let me make a comment here before we get into that.

Now it's wrongly translated in the King James that the blood of Jesus atoned for our sins. It did not. That atonement word is an old covenant word, which meant the blood of those animals covered the sin of the people. It was atonement blood. Jesus shed the blood of the everlasting covenant son, and our sin were wiped out. We're made new creatures. That's good news. That's the gospel. That's good. Redeemed us from the curse of the old covenant. The law being made a curse. He is the lamb. He is the covenant sacrifice. He is the one. He was the one that the day we're drawing a picture of back there and that scape goat went out into that wilderness with the sins of the people on his head. Huh? If only saith the Lord, my people will believe that receiving healing and deliverance and financial victory would be so easy. The struggle is over.