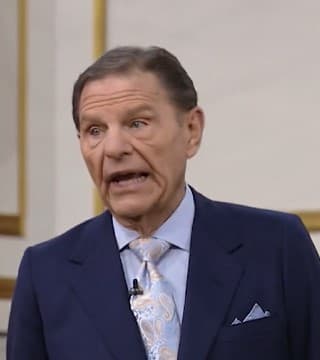 Now then, go on to the 17th verse, the 16th verse. "The spirit himself bears witness with our spirit that we are the children of the almighty God. And if children, then heirs, heirs of the almighty God and joint heirs with his son, Christ Jesus", my Lord, my God listen to that. And one of the most startling revelations in the New Testament happened right at the covenant supper when Jesus and all his men were seated there, and he's finalizing this blood covenant deal that God made with Abram all those many years ago and changed his name to Abraham. He said, "this is my blood in the new covenant, drink all of it". Amen.

Oh, now he said in John 17, see the 13, 14, 15, 16, 17, chapters of John were all in that upper room. When you realize that, it changes the complexion of this whole thing, because he's about to become the lamb of the new covenant. Okay. Not having working knowledge and the depth of the covenant of blood, western minded people know nothing about blood covenant. Absolutely nothing. But I preach to people, Jesse has preached to people, Jerry has preached to people. We've preached to people in other countries, particularly in Africa that are very, very aware of it and understand it, and it means something.

But in the western world, if you say, most of them if you say Testament, they really don't even get that. That's a super important word because, our forefathers that translated the King James Bible understood extremely well, blood covenant. It was practice. It was practiced back then in the British Isles and they understood that a blood covenant is the will and Testament of the people that enter into that most highly regarded of all human contact, which was a covenant of blood. The promises that were made, were the absolute will of the patriarchs of the family that made those promises. You understand what I'm saying here?

They understood that and they're trying to get that over to people that would have read that as covenant, but he's trying to get it over to them, that this is God's will. Well I just don't know whether it's his will to heal me. Well, read the will and you'll find out. That's what church services are supposed to be, when you come together as family and read the will. Dear God. Hallelujah. Join heirs, joint heirs, not big heir little heir, joint heirs. Now Ephesians please, chapter three. In every covenant, every covenant two men wished to cut the covenant. They come together with their friends and a priest, first they exchange gifts. By this exchange of gifts they indicate that all one has the other owns if necessary. After the exchange of gifts, they bring a cup of wine. The priest makes an incision in the arm of one man and blood drips into the wine.

Now you have to understand that the root word in Hebrew to covenant is a cut. To cut the covenant. Say cut, not make, cut, leaving the thought, a cut where blood flows. The mixing of blood. You make an incision in the arm of one man and the blood drips into the wine. An incision is made in the other man's arm and his blood drips into the same cup. Then the wine is stirred and the bloods are mixed. The cup is handed to one man. He drinks part of it. He hands it to the other man. He drinks the rest of it, and when they have drunk it off times, they will put their wrists together so that their blood mingles, or they will touch their tongue to each other's wounds. They have become blood brothers. Jesus said, this is my blood in the new covenant, drink it. Hallelujah.

Ephesians chapter three. I won't go, I won't go all the way into all, but, I'll, I'll, I'll just get it right straight from scripture. They would have a name changing ceremony where the two names were mingled and in English, and British practices, there was a hyphen between the two names. If, if it was Mr. Jones and his family and the Smith's and his family, then the Smith's would become Jones, Smith, and the Jones would become Smith-Jones. That's the reason you see names like that. They just finally took the hyphen out of there and it became a longer name. Somewhere down the line those two families got together and cut covenant.

How many of you are familiar with the ministry of our dear brother Howard-Browne? Rodney Howard, somewhere the Howards, there's a hyphen in the middle of his name. He signs it that way. Howard hyphen Browne. I met Rodney long before ever went in the ministry and he was pastoring in South Africa and of course South Africa, is very closely tied to the British world. Somewhere, the Howard's and the Browne's got together. A daughter and a son married then it didn't just change her name, it changed the family name.

Now you know darlin where we get the idea of, I pronounce you man and wife, now your name is no longer, Cathy, your name is no longer what it was your maiden name. Now it's Duplantis. Why? You made a covenant. Now, joint heir. Are you in that third chapter of Ephesians? Verse 14, "now remember God said your name will no longer be Abram. Your name is now Abraham". Now there's more to that then just changing his name, from a father of nations to a father of many nations. No, no. It's because we're, we're Hebrew free. There's fat-free and then there's just ignorance of the language. It's such a marvelous language. He actually, by that age, and a Hebrew scholar, a rabbi knows exactly what he did. He changed his name from Abram, to Abraham injecting his name into the middle of Abram. It's a covenant name change.

Now in the 15th chapter of Genesis, when the Almighty God appeared before Abram and he said to Abram, now there was no name change here. There was a covenant made, but not the covenant. It became a part of the covenant, because this is when he told him, look at the heavens and the stars and so shall your seed be. He said, you get from me animals and in covenant keeping. See all human covenants came out of this one. The first blood ever shed, are you listened to me, the first blood ever shed on planet earth was not Able's blood. They sewed fig leaves. You imagine a fig leaf suit and they didn't even know what sew was, but he, El Shaddai, covered them in skins.

The first blood to ever see the light of day was an animal and God covenanted with this man to meet his needs. What Adam did with that fig leaf suit was man's first attempt to meet his own needs without God. It was a sick failure. Oh, don't you know, I just, I imagine in my mind, I, you know, God, El Shaddai. Now here he's acting as mother and father. Oh yeah. God is as much female as he is male, but he created the man first. So he takes on the male gender, that set the order. That is so simple you have to have help to misunderstand it. Amen. I can imagine him picking the most gorgeous animal he had created and he entered into a covenant with his man and his woman, and clothed them in the most gorgeous glory to God.

The closest thing he could get to the glory, it still wasn't quite good enough. They were clothed like all other animals from the inside out. They radiated his glory. They had never seen their physical bodies, even though they were perfect, they looked ugly to them because can you imagine? No, you really can't. The glory of God. See, we only see something like 2% of the color spectrum because of our fallen nature. We fell below the super-light line. Adam could see 100% all the colors that exist, more colors than the rainbow. All color. Oh Jesus. That's what Adam and Isha look like. Her name wasn't Eve until after they fell. Her name was Isha and she had a name change. But don't you know they were well dressed. It's time to shout in the house. Ah glory to God. Hallelujah. Thank you Lord Jesus. I said thank you Lord Jesus.

Now here it is, verse 14 "for this cause, I bow my knees unto", now listen, "I bow my knees unto the almighty God, the father of our Lord Jesus Christ". Of whom, not Jesus, of whom, of the father, of the Almighty God. The whole family in heaven and earth is named. Our covenant is not with Jesus, our covenant is not actually with God. The covenant is between God and Jesus. And we're brothers and joint heirs with the Christ himself, which puts us in covenant to the almighty one and we have His name. I said, we have His name. We have His name. We've been named after him. Covenant change. What happened? You got born again and your name got changed. Bless God. You're new creature was circumcised in the heart. The first human blood to ever be shed in a covenant was the blood of Abraham in circumcision. Human blood.

Now, when he did mess up, God put in a priesthood under Moses. Because of their transgressions. When I say Abraham messed up, it was his family down the line. The covenant between God and Abraham. So he's covenant to their family. Generation after generation, they got away from the, from the reality of covenant altogether, and they fouled up. God said, uh-uh, ah, no, no. Don't be killing the man. He's supposed to die because they have a covenant, a death with him. A covenant of life and a covenant of death. But no, no, no, no. Don't, don't, don't be killing the man. I'll accept the blood of an animal in his place. So the blood sacrifices begin. All of this is covenant. You getting anything out of this? There came a time when the Almighty God said to his covenant partner, I'm going to destroy Sodom and Gomorrah, but I didn't want to do it unless I come and talk to you first.

Now why would he do that? Because lot lived there. Say it. Mhm. Mhm. Boy it just, what I call it just goes wide screen. When you get into the roots of what this is all about, my Lord, my God. And what did Abraham say? Hold on here a minute. How about 50? Okay. How about 40? Okay. How about 30? Yeah, if you say so. How about 20? How about 10? I wish he'd gone ahead and got that other 10, but then that's none of my business. That's between these two brothers. You didn't get it. It was between God and his brother Abraham.