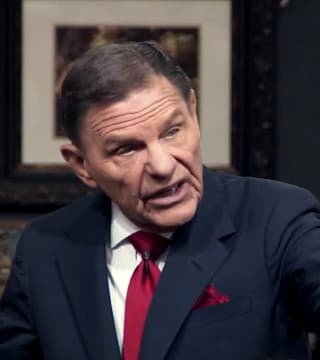 Now go with me over to the book of John. Oh glory, glory, glory be to God. Thank you, Lord Jesus. Thank you, Lord Jesus. The 16th chapter. Now remember all of this 15, 16, 17, well actually 14 goes all the way back. The thirteenth chapter 13, 14, 15, 16, 17 was the covenant supper. Amen. Now in this 16th chapter, Oh, the 13th verse this describe our blood covenant relationship with the most high God and the 17th chapter. When God made the first human blood covenant through circumcision.

Now, he'd already made covenant with Abram in the blood of animals, in the 15th chapter, but in tee 17th chapter, circumcision was introduced and the name change ceremony took place and he changed his name from Abram to Abraham. Everything God has now belonged to Abraham. God himself comes down and said, I'm gonna destroys Sodom and Gomorrah, but I didn't want to do it till after I talked to you. He couldn't. God created the heavens and earth and gave it to men and men gave it to the devil. That's the reason Jesus said, whatsoever you bind on earth is bound in heaven whatsoever you loose on earth is loosed in heaven. He can't just come in here and start binding and loosing. His covenant partners have authority here.

Now when we enter into a relationship with him and we say, sir, I should would like I'd sure appreciate you getting involved in this, he says, I thought you'd never ask. Amen. Well, we have his name. We've been named after him. Glory to God. This is such and so graphic a picture of it, the first covenant act. Now, all of this is being done in Matthew, Mark, Luke, and John under the auspices of the Abrahamic covenant. That's the reason he said, I have come to the house of Israel. Jesus ministered as a prophet under that covenant. Called himself a prophet, a prophet has no honor in his own hometown.

Verse 13, how be it when he... let me make another statement. Jesus was and is the covenant gift of God to the world. God so loved the world that he gave his only begotten son, but he's not the only begotten anymore. He's become the first born of many brethren, because we're joint heirs. The Holy Spirit then, Jesus, the gift to the world. The Holy Spirit of God is the gift to the church, the covenant of himself. I was engaged in a time of prayer number of years ago and uh, I was asking the Lord for more power, and more power to be manifest in the prayer line and so forth. And I was just getting started. And I just kept declaring, Oh God, Oh God, send us, send us, send us more power.

Now and I heard other people pray that, you know, send the power just now and sing songs like that and uh, you know, oh God send us more power and he interrupted me one day, he had had all he wanted to hear. He said, where am I going to go to get it? And he wasn't all that nice about it, and I said, sir? Where am I going to go to get it, Kenneth? He said, I'm the top. I'm going to say Kenneth needs more power. Then he startled me. He said, I could have filled you with an angel. I said, uh? He said, what is a demon possessed man. I saw it. He said, but Kenneth, I didn't trust you to an angel. I didn't trust you to anybody but myself. All the power you can get is only inside of you boy.

Boy, I never said that again after that day. Of course not. Amen. And the more covenant minded you become, the stronger that sense of power becomes cause you're baptized in it and with it. How be it when he, the Spirit of truth, may I put it like this? What is truth? It's covenant. The Spirit of the covenant is come. He will guide you into all truth for he shall not speak of himself. Now hold that and just come back to the 14th chapter. This is all one discourse around that table. He said, and the 10th verse, believest thou not that I am in the Father and the Father in me. The words that I speak unto you, I speak not of myself, but the Father that dwells in me, he does the works.

Now, when you sum it up in a synopsis, particularly in the gospel of John, I only say what I hear my Father say, I only do what I see my Father do for the son can do nothing of himself. Amen. And because he spoke the Words of God, then God gave him his Spirit without space. Hallelujah and that same God dwells on the inside of us. And he's just is ready and willing to do the work today as he was then. He doesn't, hadn't changed not one bit. Go back over there now. When he, the Spirit of truth is come, he will guide you into all truth. He shall not speak of himself, but whatsoever he shall hear that shall he speak. And he will show you things to come. He will do it. He shall glorify me. And here it is right here. He shall receive a... Listen to me. Listen, listen, listen. In fact, don't read. Look at me. He shall receive of mine.

Now, here's Jesus saying the Spirit of El Shaddai. The almighty God. He shall glorify me. He shall receive of mine, and show it unto you all. Don't forget the covenant. All that he has is yours. And all you have is his, all things that the Father has are mine, therefore said I, he will take of mine and show it unto you. We have access to everything God knows, everything God is, everything God has. Made recreated a new creature in his likeness. And we don't live by bread alone, but we live by every Word of his covenant that comes out of his mouth.

And he said another thing to me a few years ago that just kinda, uh, he said Kenneth, and he's excited when he said it, I just read that scripture. I don't live by bread alone, but by every Word, and the word every word just jumped off that page at me, but every Word that proceeds out of the mouth of God, every Word, every Word he says I have the spiritual capacity to feed on it. When he says, by his stripes, I'm healed. I can feed on that. Listen to what he said. He said, I am almighty God. He said I could start speaking a word a second and go throughout eternity and never say the same word twice. You know he can. He invented all words to start with. They ask a question on college campuses once.

Oh, come on. Do you think God understands radar? You'd be shocked at how many of them said no. You know where they got radar from the bat. That was the original idea. This thing can't see and it doesn't miss. It's using something else. Amen, and he doesn't- whatever he's after whatever bug he's after doesn't have to be sitting still either he just fly around and gets it. That's the end of that. And guys really started working with that, and the next thing you know it, it developed in the radar. He's the almighty God. And he said, I could speak throughout eternity and never say the same word twice. And you have the spiritual capacity to hear and understand all of it. Not the mental capacity, yet we don't have that kind of mental capacity. It's coming. Amen. But the spiritual capacity. Glory to God.

I'll close it with this, the 30th chapter of Deuteronomy. Oh, I love it. I, call heaven and earth to record against you today that I have set before you blessing and cursing, therefore life and death and blessing and cursing therefore you choose life. Choose life. I've already made my charge. I've chosen you. I love you and I'm delivering you from death and cursing, come on. Why did there have to be a law? Why did there have to be a first covenant? Why did there have to be a second covenant? Why didn't God kill Cain for killing Adam, I mean for killing Abel? I mean after all, that should have been capital punishment. It was not against the law. He didn't have a moral right to do that. Adam didn't have a moral right to commit high treason, but there wasn't any law against it. The only law from that day forward was covenant law. When two entered covenant, then there were promises made. Now it's against the law between you and me to break that promise.

So now certain things are not lawful for my family and your family. Might be alright for somebody else, they're not in covenant with you, but there's a law between us. Huh? That was the first law. But then it had to be put into record. This is just as much a manifestation of the almighty God and his son Jesus in the earth. This book, cause this is record of the covenant and now for another angel to do what the Devil to do, all he has to do is think about it. Wham. Send his saddle home brother. He's done. Against the law. I said it's against the law. It's against the law for the devil to do anything to you. He's a lawbreaker, he's a liar and a thief. He's first of all a thief. He's not a killer first, don't misquote this.

Jesus said that thief comes but for to steal, kill, and destroy. What is he after? The Word. Jesus said, the sower sows the Word, satan comes after it. Now if he can steal that, then he can kill you. Because faith comes by hearing and hearing by the words of the covenant. And the more the covenant, you know, and the more you realize how powerfully God is obligated to what he said, the stronger your faith becomes. The more you hear the reading of the will, hallelujah, thank you Jesus.

I declare by the authority invested in me as a, as a prophet of the most high God and prophet of El Shaddai, a prophet of Jehovah Rafa, a prophet, and a teacher of the Lord Jesus Christ, I declare you well. I declare you debt free. Jesus preached supernatural debt cancellation. That's the acceptable year of the Lord. But here again, Western minded people just, just kind of blob through that and don't have a clue in what the acceptable year of the Lord. It's the great Jubilee. Well, that was every 50 years. Not anymore. Not anymore. Jesus was saying to them, by man you don't have to be blind anymore. I'm here. I am the Jubilee. I'm your Covenant come to pass. I'm here.