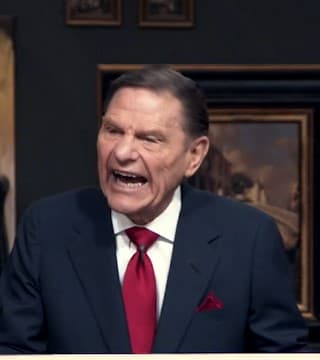 Look in the second chapter of the book of Hebrews, verse nine "We've seen Jesus who was made a little lower than the angels". Satan is a fallen angel, "for the suffering of death, crowned with glory and honor that he by the grace of God, should taste death for every man". Taste represents the five physical senses. Now, we have come from the first covenant that carried a curse of death all the way over to the second covenant. Think about this. In the first covenant, you couldn't get born again. You were saved but not born again. That didn't happen until Jesus was glorified and the first covenant saints moved over into the second covenant. Hallelujah. Preserved in paradise, but not in heaven.

Now, you and I are new creatures. You nor can any born again human being, taste it when you die. You can't smell it when you die. You can't feel it when you die. You can't see it when you die. And you can't hear it when you're die. You won't know it. Glory hallelujah. Except, Oh I feel good! One of my very closest friends, in fact he was my flight instructor. When I got my type rating in the Learjet back many years ago, the second type rating that I received. And Captain Dale Black. When he was just a young man, he had all of his ratings and he was coming up the line, new God, born again, young man. But I mean, you know, he's just kind of a hot rod. Had him a little MG sports car and he got it around here in Southern California, you know, he was... Boy, and he was living his dream. He was working for a company that flew back in those days before there was electronic banking, banks would charter light airplanes that would fly, cancel checks back to and fro and do paper banking before it became electronic.

And I've known several guys that broke in and build time and they flew checks and then as always in the middle of the night and all that kind of thing. And I won't go into all the story, but there was real confusion that day. Dale was in the right seat and his instructor and very, very close friend was in this little makeshift jump-seat between the two sheets and some guy that the man that owned the company, wanted this guy to fly the trip. And he was kind of a belligerent sort of a fellow. And they were, they were already out on the end of the road in the run-up area and did all our pre-flight checks and had run there and run the engines up. And his close friend and instructor, which was right there in that center seat. He said, "Dale, I'm getting in the right seat".

So Dale got out of the right seat and got in that makeshift seat there in between the two of them. And this guy was just really erratic in the airplane for some reason or other and it seemed like, maybe he hadn't flown in a long time or something, whatever it was because it turned out to be nothing wrong with the airplane. They took off. Just, I mean moments after that take off, and this guy, for some reason or other, I don't know, he just throws it to controls or something. He messed around on this thing with the engines putting out full power. I mean, they proved it and he just dove the thing and into a cemetery and hit the top of this Memorial mausoleum of all things. A tribute to fallen aviators completely destroyed that airplane. I mean, it completely destroyed it and killed all three of them.

And Dale immediately came out of his body and he didn't know he was dead. And he said those checks were just floating down, every place those paper, just all this thousands, thousands of those, those canceled checks. So he reached up to get one of them. He couldn't hold it and you just went through him. Can you see my point? He didn't know he's dead until he saw himself laying there and that wreck piled up in there, all broken up. Man, I wish I had time tonight to go into all that whole old story. In fact, I talked to him on the telephone just a couple of weeks ago. And man, I'm telling you, we just said we just had a... He came out with a new book on, on this thing and I got hold of it and read it and it fired me up again and so I called him and we just had a great reunion together.

And it's amazing all that he went through while they were trying to put his body back together, he'd go back in his body and then he'd die again. And he'd float around that room there where everybody was. And they had his body in and ambulance, you know, rushing in there. In fact, all three of them rushing them to the hospital or morgue or whatever they had to do and he said, sometimes he's in the ambulance and all of a sudden he'd go back in there once they'd get a spark of life out of me, go back in his body, and then he'd be outside that ambulance following it. And it talks about the experience he had in heaven and the wonderful time that he had there. That's our covenant. Amen.

My boss, when I was copilot on Oral Robert's airplane, Bob Duweese. And Bob had a massive heart attack on the handball court and he was telling me this, this is few years after I left ORU, and him and Charlotte were telling Gloria and me about it and he said, Kenneth, "I have absolutely no remembrance of that heart attack". He said, "I just remember I was playing handball". And he said, "Just suddenly I wasn't there anymore". And he said, "I was in this gorgeous, most beautiful place I'd ever seen in my life". He said it was just a small little road, but he said, "I noticed on each side of the road as close as I could tell, the fence on each side of this little road was hand tooled mahogany". He said, "It was fabulous". And he said, "It took me a little bit to realize where I was". And he said, man, he said, "All of a sudden I saw the lights of the City and I recognize where I was", and he said, "Kenneth, I never felt such a power in my legs".

Did you remember them? God said, right then in second Corinthians, the sixth chapter, "I will walk in them". The spirit of God is not a blob. He's not just right here's where you contact him, this, this, this is, this is the core right here. This is where your spiritual voice is. This is where the voice of your spirit and his spirit is, but he has legs and arms and eyes. Amen. No wonder, He said, lay hands on this sick. Glory to God. If you know the spirit of God, your hands, that anointing and those special anointings to lay hands on the sick. Every believer has it. They shall lay hands- This is covenant talk. Jesus is covenanting the church against sickness and disease and he said, "In My name, you, the believer, will lay hands on the sick and they will recover".

It's God almighty covenanting with the church against the devil, against sickness, against disease, against death, glory to God and against sin and darkness. Hallelujah. And we're his covenant arms we're his hand's and his eyes and his feet. We're annointing carriers, we're infected. That's the reason the devil is so terribly frightened that we're going to find out who we are and find out about this covenant and find out what it means to speak supernaturally in other tongues, whether it's supernatural language, he just has no way of breaking into. Hallelujah! And you come to that place, "Oh, but brothe Copeland, I don't know what happens. I don't know what's going to happen. I might die".

Let me help you with that. Your body's gonna quit one these days. You should have known that by the time you were four and probably did. But there's a plan in a covenant. You and I that know Jesus Christ of Nazareth as our covenant blood brother, we've done all the dying wherever we're going to do. All the dying you'll ever do. And this time on this earth, even those of us that live to be 120. Oh, come on! That's the shortest time of the whole thing. It's little to nothing compared to eternity, compared to the covenant that we have, which is the everlasting covenant and the blood of the everlasting covenant was shed on your and my behalf. "For it became him. For whom are all things, and by whom are all things, and bringing many sons unto glory to make the captain of their salvation perfect through sufferings. For both he that sanctifies and they who are sanctified are all of one".

This is all covenant talk. This whole book of Hebrews is about the priesthood of the covenant Jesus after the order of Melchizedek, who in honor of that covenant after the slaughter of the Kings who is actually Shem, Came with the bread and the wine and said, "Blessed be Abram of the most high God, possessor of heaven and earth. He's in covenant with God who is the possessor of heaven and earth. What'd he have with him, the covenant elements". Glory to God. Thank you Lord. And he invoked the blessing of God.

And again, I will put my trust in him and again, behold I and the children, which God hath given me for as much then as the children are partakers of flesh and blood, he also himself likewise took part of the same. Jesus, the man became flesh. He had to die. He had to have blood. No covenant without blood. No such thing as covenant without blood. That through death he might destroy. One translation said paralyze, another one said bring to nothing. Zero. Not! Him that had the power of death. That is the devil. He had it, he lost it. And deliver them who through fear of death were all there lifetime subject to bondage. All satan has left is the threat. But if he can get it to work, then your covenant is not producing for you.