Kenneth Copeland - Faith Says, Then Does 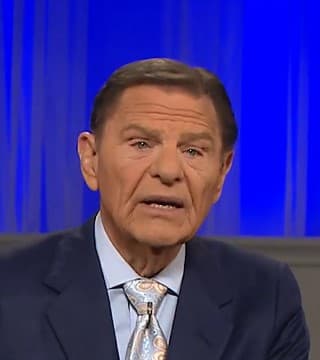 Farther, we thank you. My, we've had a marvelous week last week and a wonderful week this week. What a way to start a new year. Glory to God. Hallelujah. 2020 praise God it's here and I love it. Hallelujah and Lord we thank you and we praise you.

We're talking about the fundamentals of faith and, believe it in your heart and say it with your mouth. The first basic fundamental. Faith will not work in an unforgiving heart. Abraham's blessing cannot be received with Thomas's faith. And then number four, faith calls things that be not as though they were. And as I said to you yesterday, that's the most difficult for people. And after the time we spend in it you can see why. Because you go with that mentally. I mean, how could I be doing this? But when you, when you consider not your own body, but only that which God, only the covenant I, here I go again. I know, I can hardly just stay out of that cause I love it so much. But now the fifth one, faith demands, corresponding action. Faith without following it with action, it's dead. It doesn't have anything to do.

So, let's go back to what we talked about yesterday in God, the covenant and the contradiction. Abraham considered not his own body now dead, neither the deadness of Sarah's womb. a hundred years old. Well, it's impossible for them to have child. What he do? He immediately began to act on that. He immediately began to say that absolutely considered not his own body considered not the symptoms of the contradiction at all, but only that which God had promised. Yes. And he just kept doing that until, and after Sarah died, he remarried and had six more children. So she, he didn't quit doing that. He kept acting on that work. He kept calling himself that. He kept doing that. He kept doing everything God told him to do and he lived to be 75 more years after his body was dead. He was done at a hundred amen. So thank you Jesus.

Mark chapter five verse 25, "A certain woman..". No, the Lord won't let me start there. Verse 21, "When Jesus was passed over again by ship unto the other side", he was across the Galilee from Capernaum. His home and ministry was in Capernaum. That was home. So he headed straight from there back home. Well, you and I both know he had lookouts. You know, they're looking for him. They want to know when he's there. And so verse 22, "Behold, there cometh with one of the rulers of the synagogue, Jairus by name, and when he saw him, he fell at his feet and besought him greatly saying, 'My little daughter lieth at the point of death, I pray thee come and lay their hands on her that she may be healed and she shall live'".

Now Jesus is easy to receive from. He's El Shaddai in the flesh. That's what he's here for! Amen! "Jesus went with him, much people followed him and thronged him. And a certain woman which had an issue of blood 12 years, had suffered many things of many physicians and had spent all that she had", She spent all that she had. She's financially broke and destitute. "Was nothing bettered but rather grew worse. When she heard of Jesus, came in the press behind and touched his garment. For she said, 'If I may touch but his clothes, I shall be whole'". I will be whole. She didn't shall be healed. She said, I will be whole. That included her finances, that included everything in her life. I'll be whole of this thing.

Now, "And straightway", immediately, "The fountain of her blood was dried up and then she felt in her body that she was healed of that plague. Jesus immediately knowing in himself that dunamis", power, the Greek word dunamis, we get our word dynamite from it, "had gone out of him, turned him about in the press and said, 'Who touched my clothes?' His disciples said unto him, 'Thou seest the multitudes thronging thee and sayest thou, "Who touched me"?' He looked around about to see her that had done this thing, but the woman fearing and trembling, knowing what was done in her came and fell down before him and told him all the truth. And he said unto her, 'Daughter, thy faith has made thee whole. Go in peace and be whole of thy plauge.' And yet while he yet spaked, there came the ruler of the synagogue's house certain which said, 'Your daughter's dead. Why trouble is the master any further'"?

Even in the face of the death messenger, Jairus never said anything else. Stood there and listened to her tell her whole story. Never said a word, not one word. Spoke his faith. And that's all he had to say. He had all kinds of opportunities to blow this thing. Somebody come up and tell you your daughter's already dead and make it want to just swing around and hit first person you see that he already had... Where did he get that kind of faith? By hearing. Yeah. But when did he hear it? When Jesus was teaching in the synagogue. You got it! That synagogue that he was president of was the same synagogue in Capernam that the Centurion built. So he's president of the synagogue. He's not hostile to Jesus. The rest of them were, but he's sitting there listening to Jesus preach in his own hometown synagogue, and he's preaching on the blessing, not the curse. And then he said, "Daughter, your faith made you whole".

I want you to see something. Jesus just came to town, got out of the boat, and Jairus just fell on his face. I mean, right there at his feet. I think he got his clothes muddy and didn't care. He didn't care who saw him with this man. If it cost him his job, fell at his feet, never said another word. So he's headed to Jairus' house and a woman stopped him. God didn't tell Jesus to go to Jairus' house. God didn't tell Jesus to stop in the middle of the street. Jairus' faith told him to go to his house. The woman's faith stopped him. Come on. Oh yeah. Amen.

Now let's go from here to the book... We need you to hold your place there and let's go over to the book of James. Now, we're talking about corresponding action. And in the first chapter of the book of James, verse 22, "Be ye doers of the word and not hearers only, deceiving your own selves". Chapter two verse 14, "what doth it profit my brethren, though a man say he hath faith and has not worked, can faith save him? If a brother or sister be naked and destitute of daily food, and one of you say unto them, depart in peace, be ye warmed and filled not withstanding, you give them not those things which are need for the body". What does it profit? "Even so faith if it has not corresponding action is dead, being alone". being by itself. Are you following me?

What's she doing? Well anyone can begin to say the word of God and school yourself into faith. You start saying it and you just, Wow man. Uh, like, like what I'm talking about yesterday, um, I, uh, heard the testimony of a man that I knew quite well back, like the kids say back in the olden days and he was ministering in a full gospel businessmen's fellowship. He was a businessman and um, Norvel Hayes and Norvell was ministering and there was a lot of people in there and they were, they were praising God and shouting around and, and there was a man sitting down there and his legs all tucked around and, and the Lord said to him, "Tell him to call his legs straight and they'll straighten out".

Now that's where I got some, I'm not smart enough to think this stuff up. You understand? Hey man, I got all this from brother Hagin. I didn't... I... Did you know, you've never had an original thought. Nobody has. Somebody thought it before you did. Amen. Most people think, well, there's God, then there's the devil, then there's me. Come on. Really? You're the agreeing witness. Just depends on which words you put in your heart and your mouth. There's God's words, There's the devil's words. You're the witness. Out of the mouth of two witnesses, you're the number two. Amen.

And Jesus said, "Who did dad who touched my clothes"? She was aware of the power going in. He's aware of the power going out. Yeah, the anointing! Glory to god. That tangible power. Oh, thank you Jesus. Thank you Lord, Jesus. And she told it. She testified to Jesus. In 1950 in Rockwall, Texas. Jesus appeared to brother Hagin and he said, I've got this Sermon and I'm asking you is this the final point? And he said that, yeah, this is the fourth point and it was those four points and here we're out of time, but I'm going to finish it with this. He said, anybody that will do these four things can receive anything from me.