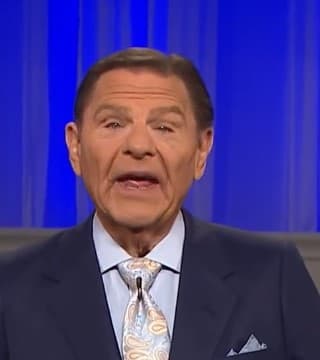 Father, we thank you today we open our hearts. We open our minds, especially for revelation from heaven, revelation of this life of faith, faith in God. And we thank you for it. And we give you the praise and the honor and the glory for it, in the matchless name of Jesus. Amen.

And welcome to Kenneth Copeland Bible college this morning. Praise God. Hallelujah. I'll tell you something if you can't preach in here. Forget it. You can't preach. I mean, Oh my goodness. And we're discussing and studying the force of faith and the spiritual force, the creative force, God's faith that is generated in the heart, in the spirit. The spirit in the Bible is referred to as the heart. Generated in the spirit man in the heart of a born again, human being. Glory to God. I get, I'm already excited about it. Praise God.

I may not found out about it 53 years ago and I've been preaching it ever since. There's is a hard and fast as I can. I will mention this to you because vital information, don't ever try to be a Jack of all trades. Find out what your calling is, find out what your specialty is. Amen. And my buddy and then stay on that track. I was called and ordained to teach and preach faith. I'm a faith specialist. That's what I do. And of course I preach of the things, but they are extensions of that. And if there's ever a time, I'm not real sure what to preach. I just go to Mark 11:22. Amen. Hey, that's what I was born to do.

Well, you preach on the righteousness of God, but righteousness is by faith. You preach on the love of God, but love is by faith and faith is by love. Why is it so important to teach and preach faith? Do you ever study the armor of God above all, taking the shield of faith? Amen. All right. Now, then Mark 11 is the classic teaching of Jesus on the subject of faith. Now, he had on his way from Bethany to the temple, a situation occurred and he cursed a fig tree. A fig tree lied to him and he cursed the thing. So they said, he answered the tree and the tree said, not today. You're not getting anything to eat today. He said, well, nobody's going to eat off of you again, bro.

Now it took some time between 12 and 24 hours for you to see the fig tree on the outside. The scripture said he cursed it from the roots. Spiritual things start on the inside, not the outside. We are inside out people, not outside in people. All your life, you were raised outside in. Everything you needed was outside and you needed it inside and the government had it. Your parents had it or somebody else had it and you wanted it and didn't know how to get it, but you got born again in the kingdom of God. Came on the inside. Praise God and everything you will ever need is on the inside of you and your faith will take it out of the inside manifested on the outside. Glory to God. Amen. That's just the way the kingdom of God operates.

Now then we're talking about the fundamentals of faith. And again you have to go back to the basic fundamentals and you need to make a habit of that. Go back to those fundamentals. Now, I relate a lot of my life to aviation and never, N-E-V-E-R, never even start the engines on an airplane without a checklist. Any man that tries to fly for me and I catch him not using a checklist. I'll fire him on the spot. Absolutely nobody's got that good a memory. Amen. If you follow that checklist from the very top, you're going to wind up in sequence, starting the engines in sequence take you all the way up. By the time you're ready to push the power up on that thing, you know, you have a good operating airplane. You don't get caught with something missing. Amen.

So, do a faith checklist. From time to time. Go back, totally immersion. Go back and get you get your CDs or however it is you do it. But I'm telling you, you go to bed with it. Get up in the morning with it. Yeah, but I got to go to school. Well, the school is not as important. School is secondary. Everything is secondary. All of it is secondary. Alright, now then the fundamentals of faith. And we mentioned this last week where, what are you watching when you're watching the, you know, the world series just happen. So what are you watching? Masters of the fundamentals. The game doesn't change and the game is always bigger than the people. Amen.

Anybody in here play golf? You know what I'm talking about? I despise that game. I'm frustrated enough, without doing it to myself. No, no, I'm too competitive and high tempered. I'm not messing with that. No, no, no. Alright. The fundamentals of faith. Number one fundamental. Believe it in your heart and say it with your mouth. Mark. 11:23, Romans 10:10, 2nd Corinthians 4:13 and I'm going, you know, you get online and go back last week and get all these. I ain't got time to babysit this morning. Now, number two, faith will not work in an unforgiving heart. Because faith worketh by love. And that's the reason Jesus said what he said in Mark 11:25. We'll get to that in just a moment. Abraham's blessing cannot be received with Thomas's faith. I enjoyed that one, didn't you? Last week.

Let me tell you something. Everything you say comes to pass, not just what you believing for. Words are seeds. And you are. Every human being that has breath in their lungs is today, what they said yesterday. Well, things just don't ever work out for me. If you say so. Amen. Well, Brother Copeland, now that saying stuff just doesn't work for me. It just did. See words are spiritually sign, typically, released into this earth. There are the most important things. Words were not originally for communication only they were for the release of power. That's the way God created the heaven and earth.

So now, Therefore I say unto you, What things soever ye desire, when ye pray, believe that ye receive them, and ye shall have them. And when ye stand praying, forgive, if ye have ought against any: that your Father also which is in heaven may forgive you your trespasses. Praise God. Now then faith calls those things that be not. No, wait a minute, the Lord just dealt with me here. You know I just work here. Now he cursed a fig tree, right? Go to Matthew 21:20 versus. Now, I have had not in a long time, but I've had people say this to me in times past. Well, now, you see Brother Copeland, he's talking about spiritual mountains and spiritual trees. I wonder why didn't he say that? So let's fix that.

Verse 21, Jesus answered and said unto them, verily I say unto you, if you have faith and doubt, not look at this, you shall not only do this which was done to the fig tree, but also if you say under this mountain, be thou removed. Be thou cast into the sea. It shall be done. See, he settled that. He's talking about changing natural things. Faith will change things. Amen. Faith will change things.

So now, well let's turn this morning, to Romans chapter 4 verse 17, as it is written, well, let's read 16 first. It doesn't making any sense, till you read down through that. Therefore it is of faith that it might be by grace to the end that the promise. Say, promise. You could say to the end that the covenant promise might be sure to all the seed. God is a covenant keeping God. Until you know this and understand this, you will never understand the Bible. You'll never will. You can't. We're Western people. Covenant doesn't mean a thing in the world. A covenant just a sign contract, that you put on paper and you hire lawyers, to break it. Not so in the Bible. The Bible is an Eastern book and the oldest law in ancient times, the oldest of all law, back when there was no law was when a covenant was struck and then there became a curse for breaking it. It became a law.

Why, didn't God execute Cain for killing his brother? It wasn't against the law. It wasn't illegal. There was no legal. I can almost hear your brain grinding. Amen. That's the reason this two covenants. That's the reason this book, the Bible had to be established in the earth. Why didn't God destroy Satan? What he did wasn't against the law. Boy, It is now. And times future, an angel even think about what he did. A hook slammed into his jaw. He's through forever. It's against the law. Somebody ought to shout amen. That's worth coming to schools for. Amen, Glory to God. Thank you Jesus.

Now, let's go back over there to Romans four. Therefore it is of faith, so that it might be by grace to the end that the promise might be made sure to all the seed. Let me inject something right here Galatians chapter 3, and if you be in Christ, then are you Abraham's seed and heirs according to the promise. God, I love it! I do love you Jesus. Not only that which is of the law, but to that also, which is of the faith of Abraham who is the father of us all as it is written. I have made thee a father of many nations before him. My cross-reference says are like unto him. So this then is, let's put it like this, Abraham, like God in his presence, call things that be not as though they were in his presences.

Whom he believed, even God, who quicken author makes alive the dead and call us those things that be not, as though they were, who against hope, believed in hope that he might become the father of many nations according to that which was spoken, so shall thy seed be. And being not weak in faith. He considered not his own body now dead when he was about a hundred years old, neither yet the deadness of Sarah's womb. He staggered not at the promise of God through unbelief, but was strong in faith, giving glory to God. Being fully persuaded that what he had promised he was able also to performance. Praise God. Now let's go to the 17th chapter of the book of Genesis. Genesis chapter 17, when Abraham was 90 years old and nine, the Lord appeared to Abraham and said unto him, I am the almighty God and we're out of time.