Kenneth Copeland - Playing the Blame Game Will Hinder Your Faith 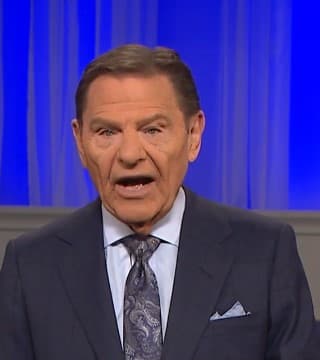 Hello everybody, this is the Believer's voice of victory broadcast, hallelujah Jesus is Lord and I'm glad. Praise God. Let's give the Lord a praise of thanksgiving this morning. Now, yesterday we concluded by reminding ourselves about the woman with the issue of blood, that she could have blamed all of those physicians about her problem of not having any money anymore because she had suffered at the hands of many physician. Nothing got better but rather grew worse. She could have really, really, I mean, well, you know how unforgiveness works. You don't really analyze it and blame them for what they really be blamed for. Now you just get way blame them for everything. Man may be the reason why I'm still sick, you know? Whatever. She could have seriously blamed them because she didn't have any money left, but she did not do that. It's obvious because faith does not work in an unforgiving heart. So obviously she had forgiven the physicians.

Now, let's go back to Mark 11. The classic teaching on faith, and Jesus saying, for verily, I say unto you that whosoever shall say, so this is a whosoever, that tells us that this will work for anyone that'll put it to work. It's not some special idea or some special kind of faith. There's this spiritual law, be thou removed, be thou cast into the sea and shall not doubt in his heart, but shall believe that those things which he says will come to pass, he shall have whatsoever he sayeth. Therefore, I say unto you, what things soever you desire. When you pray, believe that you receive them and you shall have them. And when you stand praying, forgive if you have ought against any that your father also, which is in heaven, may forgive you your trespasses, but if you do not forgive, neither will your father, which is in heaven, forgive you your trespasses. He can't. It isn't that he won't, because, I mean study it out.

Isaiah 43:25, I even, I am he who blotteth out that transgressions for my own sake. And I'll remember your sins no more for my sake. I said, I must not be getting this. You mean for my sake? No, he said, for my sake, I said, Lord, I don't get that. He said, Kenneth, do you want to remember bad stuff about your children? I said, well, of course not. Well, the answer, well yeah, but it still didn't. I really didn't lock in right there. But listen to this. If he remembers my sin, he can't bless me. That's spelled G. R. A. C. E. Grace. Well what did I do to deserve this? Everything. You don't want justice. Whoa. No, no, no, no. Brother, you don't want justice, give me some grace every time. Amen.

So that 26th verse is forgive us our sins as we forgive those who sinned against us. So it's corporate action of covenant. I'm under command to forgive. I'm a soldier in the army of the Lord. Amen. This is an army from which there is no retirement. Amen, you can't withdraw here. Thank you Lord. Amen. So we're under command now in my own personal life, and you ought to do the same because everyone in this room, everyone ought to do this, but particularly this group, you're, you're entering into a place of ministry for the rest of your life. So every word in this book is a command. You're a soldier. You are a soldier, and seek ye first the kingdom of God and his righteousness and all these things should be added unto you. That is a blood sworn promise. But to me, it's command. He said, seek first his kingdom and praise God, I seek first his kingdom.

What does it mean to seek first his kingdom? Well, you start off by making his Word final authority in your life, final authority. And you make a quality decision that this is my life. A quality decision is a decision from which there is no retreat and about which there is no more argument. This is it. I've made my decision and there are decisions you make for life. Amen. Don't be bouncing in and out of the ministry. This is not, this is not who you are. This is what you are. Amen. Thank you Lord. All right.

Now then, faith will not work in an unforgiving heart. So let's go to Galatians chapter five, and and put our eyes on this. For in Jesus Christ, neither circumcision availeth anything, no circumcision, but faith which worketh by love, faith which worketh by love. Now then let's go to Ephesians chapter four and let's look at the 32nd verse. Be ye kind one to another, tenderhearted, forgiving one another, even as God, for Christ's sake has forgiven us. Be ye therefore imitators of God as dear children. The Greek word was M.I.M.E.T.E.S. We get mimic from that word. I want to call your strong attention to the word Christ in that 32nd verse. Christ, Greek translation of the Hebrew word Messiah.

Now, Sunday, I just married my granddaughter and her young man who is Greek. Now Jenny moved to Greece, started an orphanage called Abba house. Well, Abba means daddy, and they don't have to have a translation of it that, that, Hey, they're Greek, you understand? Anyway, and they started, she started out by taking in little children that were throwaway. Children that were roaming the streets and had no place to go and met Alias. And Sunday night I married the two of them. And he speaks perfect English. When I, after the wedding was over with and everything and, and so, you know, I handed them some money. It's just some cash money out of my pocket. And I said this handed to him. I said, Alias, this is just some walking around money. And he said, and Jenny said, pray over him for his return. He said, okay, uh, can I do it in Greek? I got prayed for in the mother tongue. Oh, glory to God. I have an idea of what he said. Glory to God. Thank you Lord Jesus.

Now that word Christ, the anointed one and his anointing. When you find the word Christ translate and meditate. Is it referring to Jesus or to his anointing or to both? I can do all things through Christ which strengthens me. That's referring to the anointing itself. Notice this, be ye kind one to another, tenderhearted, forgiving one another even as God for the sake of the anointing has forgiven you. Praise God. Amen. Thank you Lord Jesus. Now, Romans five, very familiar, very easy scripture, but Oh, I want you to put your eyes on it because it is so important. Hope maketh not ashamed because, say because, because the love of God is shed abroad in our hearts by the Holy Ghost, which is given unto us. Praise God. Shed abroad in your heart shed abroad in your heart. The love of God. How do we know we're born again? Because we love the brethren. Hallelujah. I love you. I love you. And it's so amazing.

As you develop that love by using it and talking about it and thanking God for it. If you become body minded, you lose sight of the power of love. Don't be so loose with the word love. Man, I just love pizza. No, you enjoy pizza. He gives us all things richly to enjoy. Amen. You renew your mind to the fact that God is love and you become more aware and more cautious about your way you use the word love. And um, like I uh, I love to fly the same way I love to preach because I was called to fly. That's part of part of my life mission. That's part of my calling and I love it. It's not my God any longer. Man, it used to be, but it is not. But I don't love my airplane. I do enjoy it. But I don't love it. Praise God. Come on. And there, there are things that I've, I really do like, but I don't love them, cause God is love. And I'm no longer loose with the way I use that.

Now when you began to do that, you become more aware that God is in me. You have a God inside consciousness. Glory to God, the same God that created the heaven and the earth is living in me right now. And I get, Oh sometimes I just get so thrilled with him and with the idea that, I don't feel like my prayers got any higher than the ceiling, they didn't need to get any higher than your nose cause he's here. He lives in you. He said, light be light was, and in 24 hours, 16 billion, 94 million, 700,000 miles of universe. My goosebumps are double parked right now. Carolyn Savelle's dad, he's in heaven now. What a man. Oh, thank God we spent time together. Olin absolutely one of the funniest men that I ever met in my life. It's just hilarious guy.

Well, if you know him, if you've ever been around Jerry Savelle, you can't keep a straight face. And you get Jerry and Jesse. Oh, don't even talk. Don't even mention it, man. It is so funny. But anyway, first time Olin was ever in an airplane, I had him in the right seat of mine and uh, we took off and he got that first takeoff thrill. You know, that kind of acceleration and stuff. And you know what he said? He said, mhm Kenneth, it head pointy. Well, he's from Louisiana. I don't know what he said. He got a pointed head, but he didn't say, Ooh, I love this. Amen. Thank you Jesus. Praise God. That's a lesson in faith that you know, almost a hundred percent, I'm talking about, people in our community, our faith community have really never considered that, but it needs to be considered.

Now the love of God, say the love of God, has been shed abroad, in my heart, my spirit being, the love of God, has been shed abroad, in me. Now give him praise. Praise God. Give him praise. Now that takes us right in- it's just a flow now. Since we know that faith will not work i n an unforgiving heart, believe it in your heart. Say it with your mouth. We, we've come into the, uh, a real place of fundamentals now. We found out that we have it. We found out what feeds it. Glory to God. We found out certain absolute factors about the fundamentals. Now let's go to the 20th chapter of the book of John and hold your place there and go to Romans chapter four and look at verse 17. As it is written, I have made thee a father of many nations. He didn't say, I'm going to make you. He said, I have made you the father of many nations.