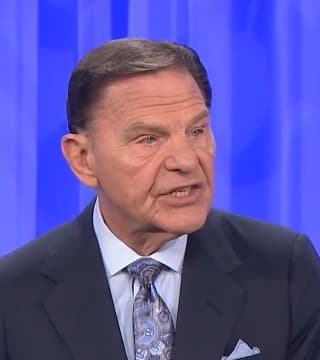 Faith speaks. "Righteousness which is of faith speaketh on this wise. Say not in thine heart, who shall ascend into heaven? That is to bring Christ down from above. Or who shall descend into the deep? That is to bring up Christ again from the dead. What does it say? The Word is nigh thee even in thy mouth and in thy heart. That is the Word of faith which we preach".

That is the Word of faith which we preach. The Word of faith which we preach. That's what we preach here. Now, we preach the Word of faith. That is the mainstream of this church and the calling of this ministry. Amen. Now everything, then, that has to do with faith, faith worketh by love. Well, I don't care what calling, what stream you're flowing in and through, and what's flowing through you. Oh, we all preach the love of God. Amen. Absolutely. We all preach the infilling of the Holy Spirit. We all preach, and teach, and flow in the love of God, hallelujah. And we all do what we do by faith.

The difference is, and hey. When I'm talking about Michael Koulianos. I'm talking about Daniel Kolenda. I'm talking about Reinhard Bonnke. I'm talking about these great men and women of God. Marilyn Hickey, glory to God. That woman, I'll tell you. Glory to God. She just puts her scarf on, and goes right in among the Muslims, and has healing meetings, and they just come by the tens of thousands. Yeah. Amen. Bold is alive. Thank you Lord Jesus. And boldness is another thing. Now we must, in line with the sixth chapter of the book of Ephesians, we must begin to seek, and ask, and believe we receive more boldness. Boldness to do. Boldness to act.

Years and years ago in a meeting we had in Lubbock, Texas, people were staying away by the thousands. And so I mean to tell you, and it was in the middle of summertime and it was hot. This was back in the 70s. And I personally knew a real estate man there, and this is the plan that the Lord gave me. And so I called him, I said, "I want you to take me to the poorest part of Lubbock, Texas". So he did, and we drove down through that neighborhood. And the Lord said... Now we had been there 21 days, and this was the last Saturday of the meeting and we're having a healing service. So, and the Word of the Lord came to me.

Now this is where boldness comes. You're walking in in a neighborhood you've never been in before, and we had certain ground rules. We're going two-by-two, and we're going to each house and we cannot mention the meeting. Not until we're ready to leave that place, you cannot mention the meeting. Our ground rule was from the Lord, "We are people that know how to pray. Is there anyone in this house that needs prayer? We're here to pray". And we paired off. I was paired with a young man named Joe Mulford who just went home to be with the Lord here just a few weeks ago. Oh, what a man of God. And different ones were paired up. Anyway, and going down the streets knocking on these doors. One place that Gloria knocked on the door, and... Who was your partner, Gloria? I don't remember who... Anyway.

KENNETH: Jesus was your partner. Yeah, he was. Anyway, Gloria and her partner knocked on this one and this woman looked out the window, and Gloria asked her and said, "Is there anyone here that needs prayer"? She said, "Oh, don't go away. Don't go away". And so they stood out there for a little bit. George, she changed clothes and kind of straightened up a little bit. Poor, poor neighbor, and then invited Gloria and her partner in.

The key issue to this, number one, listen to God. He has the answer. Number two, be bold enough to carry it out when you receive it. You're going to have to go into something we had never done before, had never seen before. I never talked to anybody before that had ever asked for the poorest place in town. But the Lord said that that's what he said do. Don't call your friends and neighbors. Call the lame, the blind, the halt and the poor. And so that's what we did, and man they came, glory to God. Changed our lives. Changed our whole ministry.

And when you get in that kind of environment, that's when the gifts of the Spirit manifests. I don't care whether you're a teacher, preacher or what you are. You get out there, the gifts of the Spirit are manifest. The gifts of the Spirit will manifest right in the middle of everything. The Spirit of God will manifest Jesus, just right among the whole place. Glory. Say boldness. Say, I receive it. I asked for it. I believe it. I take it. I'm bold in the Lord. When I know the Word that covers the situation then I'm bold to act on it. Wherever I am and whatever I'm doing I'm Jesus' own to command. And I will boldly respond. Because I'm bold as a lion of the tribe of Judah. Ha, ha, ha.

I was in Canoga Park, California years ago and I had taught along these lines. And we were close to them, closing in. This was a three week meeting, also. Had a great meeting there, and boldness in the power of the Word of God. And there was a guy, and this guy was, he was a demoniac. He just came storming in that meeting, and he came up to the front door, and this young man standing out there in the front door said, "In the name of Jesus, you just stop". Well, he just decked him, and come walking right on in there. Come walking right straight up to me. Walked up there to me and I liked to collapsed.

Now what's the difference? Maturity, number one. Number two, anointing to do that. Amen. Now, this young man was to be commended for his boldness. Boy, I mean it didn't stop him. I mean he got right up and came right on in there. And I won't go into the rest of it. It took a little while to minister to him, but we took care of business. But this kind of boldness that... One of my favorites of all, back in the very early days, a little town right south of Amarillo called Hereford, Texas, and Hereford's still not very big today.

And here, again, we had a three week meeting in an abandoned store, and it was amazing. And there's people that were coming in there for, I'm telling you. And by that third week, I mean, that place was just crammed out. We just had so much fun, and it'd hold three or four hundred people, something like that. And you start off with three, and then you'd be... But anyway, the pastor of the, I think it was the First Methodist Church. Anyways, a Methodist church there in Hereford.

How, he had been an alcoholic truck driver. Accepted Jesus, I mean got born again and got delivered from alcohol, praise God. Loved God, and now he's pastor of that Methodist church. Well, several of his members received the baptism of the Holy Ghost. But what upset him was when I went into the Word and showed where Jesus went to hell, "No, no. No". He said, "They ain't no way. Uh-uh. Nope. I'm not going for that". And the little platform we had, it was just a little step up like this, and the whole thing wasn't as big as this center section here. And two doors right there in the back, and he just popped through those doors.

Now I'm standing on this platform and he's still taller than me. This is a big guy, and I'm standing there looking at him and he's frowning. I thought to myself, "Jesus, here he comes". I just said, "Okay". And he walked up to me. I mean, he just stormed up to me. And when he got up to me, he still this much taller than I am. And he said, "(Speaking in tongues)", and he just fell on the floor, just praying in the Spirit just as hard and as fast as he could. Oh! Oh! Oh, just praying and praying.

GEORGE: This has been so good today.

GEORGE: It's so refreshing today. Haven't you enjoyed this? Oh, my goodness. Oh.

We're faith specialists. We are healing specialists. Glory to God. We are specialists in ministering the Spirit of the living God. And we take that place that the Lord added to this ministry of walking as prosperity agents in the realm of the wealth of God. And as we took that place, of course, we received much persecution, but persecution doesn't do anything. It doesn't have any place. Don't pay any attention to it, just kill it and go on.

You kill it with love, and you kill it with joy, and you kill it with praise and worshiping, and you don't even listen to it. Why? Because you're on a high ground. You're in a high place standing up on the top of the mountain. Not crawling up the sides or wondering what's going to happen, but we've taken the high ground, George. We've taken the high ground, and we're in the most precious place we have ever been in, in our ministry life. It is a place not only of honor and glory and joy, but it is a place under which we're called, and the master himself has called us up to this place.

Now, we take advantage of this place over the enemy and we become a lighthouse from on high, a lighthouse of the love of God building a place where love is King. Amen. Where people can come, and can physically and emotionally feel the love of God when they step onto this property. For this is the revival capital of the world.

It is a place where love is flowing, like flowing, like melted snow coming from the top of a tall mountain, and flowing down each side like a molten river of hot love. And it's flowing into the lives of people and it's flowing throughout this whole area around here. It's flowing into other churches in this area. It's flowing in through the city of Fort Worth, praise God, and we will know and understand more and more and more about this in the future. For the best is yet to come, but it's coming more rapidly than it ever has in our history. Glory be to God for it. We've climbed Mount Nebo and we're looking at the promise land.