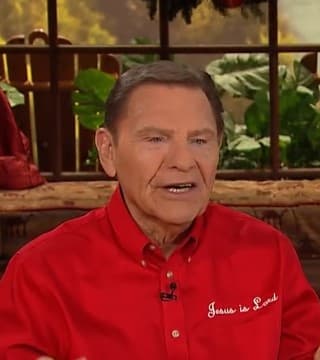 Kenneth: Hello everybody. We're Kenneth and Gloria Copeland, and welcome to Two Days After Christmas. Amen. Oh my, haven't we had a good time this week? Hasn't it just been delicious, the insight into the word and... surrounding the birth of Jesus and then what it means to us today. You know Jesus said, "If you continue in my word, you'll be my disciples, indeed. And you will know the truth and the truth will make you free".

And as I said earlier, Bill Winston, glory to God, and he said he's the sample. Well, a sample you can taste it, you can take a taste of it and see that it's good. He is the example. He's the sample. He's a man that was helpless to do anything without the anointing. Amen. And The anointing came on him as he came up out of the water being baptized with water. Then he was baptized with the Holy Ghost. And the and the prophet John Saw, the Holy spirit land on him the way a dove would land on something. He saw the spirit of God land on him. Glory to God.

That still just gives me a thrill, because I remember the day he landed on us, just two little scriptural illiterates, you know, over in the state of Arkansas. We got born again six months after we got married. We were already just so in love with one another. And then we fell in love with Jesus and everything changed and praise God. And gave us this marvelous, wonderful life that we've lived together for 57 years. And we just, because of him, because of Jesus and because of his word, that we've lived 57 years without fussing and fighting. Now that first six months, with me. But this woman taught me how to love and she taught me how to live, glory to God. And she just never would enter into the fuss. Praise God. And we haven't had cross words. We haven't had cross, I don't remember the last time.

Gloria: It's the truth.

Kenneth: It is the truth. Now, we've talked about, yesterday we're talking about it's the intercessors. It's the prayers, God revealing. And it's that way today. And there's not a few of us today. There's not just two like there was, you know, Anna and Simeon. But they knew, and the spirit of God even led them to the temple that day, led them into that room that day. The prayers knew who he was.

Kenneth: Oh, glory to God. Now, let's go again back into the second chapter of the book of Luke. And we'll read that 37th verse about Anna. She was a widow of about four score and four years. She was a widow of 84 years, which, and the 36th verse said she'd live with her husband seven years, so she's 91 years old. She coming in that instant, gave thanks likewise under the Lord and spoke of him to all that looked for redemption in Jerusalem. And when they had performed all things according to the law of the Lord, they returned into Galilee to their own city, Nazareth. And the child grew and waxed strong in spirit, filled with wisdom. And the grace of God was upon him.

Now his parents went to Jerusalem every year at the feast of the Passover. Glory to God. And when he was 12 years old, they went up to Jerusalem after the custom of the feast. And when they had fulfilled the days as they returned the child, Jesus tarried behind in Jerusalem, and Joseph and his mother knew not of it. They trusted him. Amen. They never had one second problem out of him at all. He's 12 years old. They supposing him to have been in the company when a day's journey and they sought him among their kin folks and acquaintance. Do you ever wonder where he spent the night? In the temple. Amen. Does that remind you of Samuel? It should. Amen. He's talking to the priest.

And so he just someone, he spent the night with them. Now, when they found him not, they turned back again to Jerusalem and it came to pass that after three days, one day out, one day back, three days hunting, he matched five days. That's almost a full week. He's there in that temple. He is there in the presence of his father and he is there like Samuel of old. They found him sitting in the midst of the doctors, both hearing them and asking them questions and all that heard him we're astonished at his understanding and answers. And when they saw him, they were amazed and his mother said to him, "Son, why has thou thus dealt root with us? Behold, thy father and I have sought after the sorrowing".

They're worried about him. I mean, they've been looking for this boy for a week. And he said unto them, "How is it that you were looking for me? Know you not that I must be about my father's business". They should have gone to the temple first, the first day and found him. What kept them from it? Worry. They began to say all kinds of things. Well, they maybe hurt him, somebody might have killed him. They didn't know what you and I know. They should have, because of the words that had been spoken, but they don't live every day thinking about, had been 12 years since those things were spoken unto them. And she pondered them, kept them in her heart.

What they do in life, they're doing business, they're working every day. He's just a little old boy. He's not even working in the carpenter shop yet. They're just living life. Amen. And he's just like every other little 12 year old boy running and playing and having a big time and falling down and having to get back up again and all that and he just being a boy. Don't you know he's all boy, come in dirty. You know, his mama got to clean him up and praise God. Thank you Jesus. So they really should have gone right straight to that temple. You know, I bet he's in the temple.

Gloria: You know how he is.

Kenneth: You know how he is. You know, all he wants to talk about is God. An on Sabbath, when we go to synagogue, I mean he just doesn't even want to leave synagogue, I bet you he's there in that temple, let's go there and see if we can find him. Amen. So they understood, not the saying, which he spake unto them. And he went down with them and came to Nazareth and was subject to them, but his mother kept all these sayings in her heart. And Jesus increased in wisdom. You notice wisdom is first? Wisdom is the principle thing. He increased in wisdom and stature. He growing up like everybody else. Amen. And in favor with God and man, except for his brothers and his sisters.

You notice he settled in the book of Isaiah because he was in Isaiah 53, he was in Isaiah 10 that we read last Monday about the anointing destroying the yoke. He was in Isaiah chapter, in fact, let's look at the 11th chapter of Isaiah. He found himself in these places. In Isaiah 10, the 27th verse, it shall come to pass in that day that his, the devil's burden shall be taken away from off the shoulder and his yoke from off of thy neck, and the yoke shall be destroyed because of the anointing. Now, some other translations, and it's translated fat or oil, referring to the anointing, but it's the same thing. And I know in the Spanish Bible, it's translated fat. Well, when you look it up, then you look it up in Spanish, it's referring to oil. The anointing oil, and the yoke shall be destroyed because of the anointing. All right, look in this 11th chapter. There shall come forth a rod out of the stem of Jesse. So, that's Jesus. Who's Jesse? David's father. Oh yeah. Now you're getting there. And a branch shall grow out of his roots. Who is that? That's us. He's the vine.

Kenneth: Well now you come over to Colossians chapter one verse nine, and the Apostle Paul said, now let's turn over there. I can quote that to you, but I want you to see it, I once you put your own eyes on it. This is one of the scriptures that you'll find at the bottom of my partner letter. The Apostle Paul desired it and so do I. Colossians chapter one verse nine, I've got it framed in red ink. For this cause, we also, since the day we heard it, do not cease to pray for you and to desire that you might be filled, say filled. Filled with the knowledge of his will in all wisdom, there it is again. What wisdom? The wisdom of God. All wisdom and spiritual understanding. That's the anointing to understand the word. Somebody shout amen, glory to God.

And it's because he did what he did and he's doing what he's doing. He is a man, a born again, Holy Ghost baptized, hallelujah, man. Glorified man. He said, "Handle me. A spirit hath not flesh and bone as you see me have no blood". All of his blood is in heaven in the heavenly mercy seat. Not little drops of it. How could that possibly be? It isn't possibly be. It's supernaturally done. Amen, I don't care if it wasn't but one drop, that's more powerful than any drop of blood in existence. Amen. Hallelujah. Glory be to Jesus. Look what we have. Thank you, oh yeah. Thank you Jesus. Go back to the book of Ephesians chapter three verse 14, for this cause, I bow my knees under the father, say father. Of our Lord Jesus Christ. Of whom? Of the father, the whole family of El Shaddai. The father, who's more than enough. Hallelujah. We're named after him.

Whoa. That he would grant you granted Jesus, according to the riches of his glory to be strengthened with might by his spirit in the inner man, that Christ the anointed one in his anointing may dwell in your heart by faith, that you being rooted and grounded in love may be able to comprehend, have working knowledge with all the saints. What is the breadth and length and depth and height. And to know, to intimately know the love of Christ, which passes knowledge that you might be filled with the all, all, all, I said all. Do a word study on all. A-L-L, it means all, in every language in the world. All means all. Might be filled with all the fullness of God now under him that is able to do exceeding abundantly be above all that we ask or think, according to the power that work of the Venice under him be glory in the church by Christ Jesus throughout all ages, world without end, amen.

Now there, he said they that believe on me, the work shall I do and greater works than these shall he do because I go to my father. And a lot of comment about that. There is the greater works. There's the greater works. Beyond what we can ask or think. It's in us now. The savior himself. I'm going to tell you something. God is in heaven. Jesus is in heaven. The Holy Ghost is here in us right now. And this is just as much a manifestation in the earth as the Father, the Son, and the Holy Ghost.