Kenneth Copeland - The Power of Forgiveness and Love 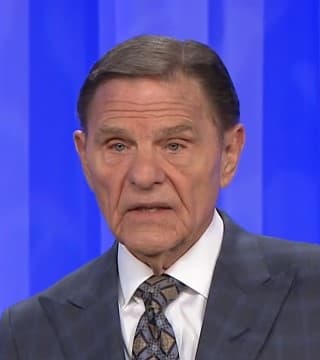 We've hit on the answer to the question. How dumb can you get? "I'm not going to forgive her. I'm not going to let her off that easy". It's killing you, not her. It's killing you, not him. Can you see it? The warped unforgiving mind. Even though you have the mind of Christ, you're not using it. Your mind is not being renewed. Even if it has been renewed in that area, you're not walking in it. Now you're walking in the sin of it. Oh, you're just happy going through your day and all that. Glory to God. Shammah, Shammah. Glory, glory be to Jesus. And all your tongue talking ain't nothing but a bunch of noise. Amen. Uh-huh.

Sure got quiet in here, didn't it? It should. You really need to meditate on this and think on it. One sermon won't do it. And I know ain't a soul in here that hadn't heard this before. Not a soul in here didn't know it. But there's a soul or two in here that needed to hear it this morning. Could be on account of what happened on the way to church. Just saying. Go on and smile. You know you might as well go on smiling. "How'd you know, brother Copeland"? Oh glory be, sweet Lord. Hallelujah. Glory, I got the joy of the Lord in me. Thank You Lord. Yeah. Well, thank You Lord. We'll do that.

Let's go back to chapter 13 verse one I, "Though I speak with the tongues of men and angels and have not agape, I'm become as a sounding brass or a tinkling cymbal. Though I have the gift of prophecy and understand all mysteries, and all knowledge, though I have all faith so that I can say to our mountain, "Be thou removed, and be thou cast into the sea". And have not agape, I am nothing. And though I bestow all my goods to feed the poor, and though I give my body to be burned and have not agape, it profits me nothing".

Years ago, years ago in Shawnee, Oklahoma, I was preaching in a meeting there in the Roy and Opal Sprague Church, they're in heaven with Jesus now. And it's wonderful, Gloria and I listen to brother Hagin still a lot, almost every night in bed. And we were listening to a meeting the other night, and he said something to brother Millard who pastored in Sheridan Assembly Church in Tulsa. Was a good friend of mine, and brother Millard's wife was Opal Sprague's sister.

Now, you have probably never heard of any of them. But all of a sudden, my heart and mind just shifted back to those meetings. Roy and Opal Sprague, they helped Gloria and me get started. And all of a sudden I'm thinking about this prophet of God, and I had the opportunity to stay in his home. Amen. And one morning, I was preaching there. I was there for three weeks there in their church. Gloria and I lived in a little house. It was a new house that we were in, first new house we were in. Little small house. I had gone down to Sears and bought a little air compressor and paint spray gun.

Well, Gloria had stayed home and bless her heart. You should have seen some of the furniture that she refinished, the little blue table that we had in that little house in Tulsa while I was going to ORU. She took the three different pieces out of a junk pile and put the table together and then refinished it. Beautiful. Just beautiful work. Well, I knew she had planned to be doing some refinishing like that out in the garage. Well, it was in a cool time of the year, and it didn't even occur to me.

Man, I ran to the telephone. I called her, told her what he said. She said, "Kenneth, praise God". She said, "I had just decided to go out there in the garage and do that". And she said, "I don't know". She said, "I just had some kind of a check against it, and I thought, 'Well, I'll wait till Kenneth gets home'". Hey, come on. Come on. Now, what if Roy Sprague had been an unforgiving man? What if Gloria had been an unforgiving woman? That's the way people get killed. That's the way people die young, not discerning the Lord's body. Not walking in forgiveness. Not walking in love. Not living the life of faith, hope, and love. Amen.

Are we getting somewhere with it? Boy, it's helping me whether it's doing you any good or not. I'm excited about it. Now then, think about... let's read this in the 13th chapter the other way. I speak with tongues of men and of angels. I have love, I walk in love. I walk, thank God, believing and standing in a place where God can use me in prophecy, exhortation, edification, and comfort for other people. I walk in a place in love, where I desire the knowledge of His will. Therefore, I walk in Colossians 1:9. Oh glory to God. I walk in the knowledge of His will in all wisdom and understanding. It's available to me because my spirit is not all clogged up.

I was sitting on my hotel room bed there in Shawnee, Oklahoma back those years ago, in Roy and Opal's church. And I'm just sitting out in the middle of the bed just praying in the spirit, and just all of a sudden just right up there in just a little quick vision. Here was this pipe, it looked like it was about four or five feet long and it was about a four or five inch pipe. I mean, that thing is a big pipe right there. And up above that pipe, there was this, gush that was... Looked like coming out of a fire hose hitting the end of that pipe. On this end down here, this thing was right up in front of my face like this. And right here... For a few moments there, it seemed like I could physically feel it just. And all the water is going out the sides of the pipe. It can't get through the pipe. It's obvious that pipe is completely clogged. And then it just finished.

Oh, no. This guy had his little deal set up out there and in his little umbrella, and this beautiful cantaloupes out there on the table. Our whole family like cantaloupes, so Gloria stopped and bought half a dozen of those cantaloupes. And so brought home and set those cantaloupes up. Boy, it looked good. And took the two good ones in the top of the segment, other four were spoiled and he knew it when he did it. I said, "Gloria, I'm going back down there and spank him. There ain't nobody going to do you like that". She said, "No". I said, "Yeah, I am too. I'm going to down there". She said, "No, you're not". "Okay". But I was mad about that for a week. Never did repent of it, until it came time to clean out my pipe. That's when I repented that.

Can you see where I'm going with that? That happens all the time. You have to really watch it in restaurants. You have to really watch it in stores. Because the devil will see to it that everywhere you go, somebody will step on your tender toes. Yeah, he'll see to it that pastor says something. He will see to it that I say something, and you take it the wrong way. "Oh, who does he think is? He was talking about me when he said that". Well, I didn't know it, but I probably was. Hey, that's my job. God gets on me, I get on you. You don't understand that? That's the way this works. Hallelujah. Are you all right? Some of you ain't smiling yet. Oh, that's better. Thank you very much. Amen, the power of forgiveness. The power of love.

Listen, God is love. Hey, you can't get any more power than that. He is love. Now, what happens when you forgive? That power rises up and radiates. Remember the 26th verse of Mark 11? If you do not forgive, neither will your Father in heaven forgive you your trespasses. Now wait a minute, hold it. That was a few days before the cross, let's go a few days after the cross. Like a couple of thousand years. Think about this.

If you had have been him, that's what you'd had done. But when you say, "I guarantee you, I'd never do that". You set yourself up for a test because you set a standard, and I guarantee the devil is going to see to it and it won't be long getting there. It'll be covered in a different coat, but it'll be the same thing that she did, or the same thing that other person. I don't care if it's a news person or a politician, I don't care who it is or what it is. You're not a judge and neither am I. We're prosperity agents. We're the love of God arm of the church. We're Holy Ghost folks. Amen.

We're not only just born of the Spirit, glory to God, we're baptized in the Spirit. The door to the supernatural has been opened in our lives and it's up to us to keep it open. He said, "Earnestly desire. Earnestly desire. Earnestly covet.", "I thought we weren't supposed to covet". No, you're not supposed to covet the bad stuff. Covet is not a bad word unless you're coveting something belonging to somebody else. But the gifts of the Spirit belong to us. He said, "Covet, earnestly desire those manifestations of the Holy Spirit". Hallelujah. Covet those things. I need them, I want them. Oh God. But it says the spirit wills. And that's good. He said, "Covet the best gift".

What's the best gift? The one you need at the time. I'm going to show you something right now. You're going to like it too. Thank You, Lord Jesus. Thank You, Lord Jesus. 1 Corinthians 13th chapter, please. We'll read it first in the King James, 4th verse, "Agape suffers long, and is kind. Agape envies not, agape vaunteth not itself, is not puffed up. Does not behave itself unseemly. Seeketh not her own, is not easily provoked. Thinketh no evil. Rejoiceth not in iniquity, but rejoiceth in the truth. Beareth all things, believeth all things, hopeth with all things, endureth all things. Agape never fails".