Kenneth Copeland - The Compassion of Jesus Will Heal You 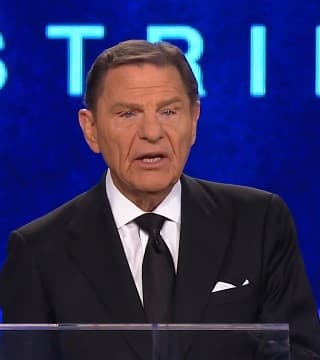 Father, we thank you this morning. Lord Jesus, oh, you are so easy to receive from. You did all of the hard work. You did everything that it took to set us free from sin, sickness, disease, fear, and all, everything that belongs to the curse, and we belong to you. And we thank you for it and we give honor and glory to your majestic name this morning for every word that's said and every deed that's done and there will be many miraculous things happen in this place today.

This is actually the base of every healing school, every healing service, every salvation service, every faith service, whatever you're doing. Hebrews 13:8, "Jesus Christ, Jesus, the anointed one and his anointing the same, yesterday, today, and forever". Now turn with me to Matthew chapter eight. We're talking about how easy it is to receive from Jesus. Matthew chapter eight and verse two, "Behold there came a leper and worshiped him saying, Lord, if you will, you can make me clean".

Now there are millions and millions and millions and millions and I'd even say billions of Christians around the world that are in the same shape that this man was. Is it your... I know you can. Everybody knows God can, but is it your will? Faith begins where the will of God is known. You can't believe something you don't know about. Now notice here, "Jesus put forth his hand and touched him saying, I will be thou clean. Immediately the leprosy was cleansed".

All right, now let's look at it in Mark chapter one. Now there are, in Matthew, Mark, Luke and John, there are 19 individual cases of healing and miracles. And some Matthew, Mark, Luke, like this one, is in all three, but you need to go through there and single out each one of those because each one of them has some differences, particularly in the book of Luke because Luke being a physician went into very detail concerning certain sicknesses and so forth, which you'll see here.

All right. Now in Mark chapter one verse 40, "There came a leper to him, beseeching him and kneeling down to him and saying unto him, if you will, you can make me clean. Jesus moved with compassion". Now, there's something we didn't see in Matthew. Jesus moved with compassion, put forth his hand and touched him and said unto him, "I will be thou clean". One translation says, "Of course I will". And I hear him saying, "This is why I came, to destroy the works of the devil". That's why I'm here. Of course I will. All right.

My observation is that he kneeled before him, but when he got in his presence that the power of the Spirit of God was so strong that he just collapsed. He just fell on his face. This is important because now we need to watch what Jesus does. "Who seeing Jesus, fell on his face and besought him saying, Lord, if you will, if it's your will, you can make me clean. And he put forth his hand and touched him saying, I will be thou clean. And immediately the leprosy departed from him".

I see Jesus just... Get this man on your mind. Running sores. Hasn't had on clean clothes in who knows how long. Now here's something as you just kind of glide through here. You don't get inside this man. He smells awful. Nobody's ever even, hasn't come close to him in a long, long time. They certainly haven't touched him. I don't see Jesus standing up here like this. Maybe he did, I don't know, but I know him. I know what he did. He just got down there in the dirt and just when he collapsed over there, he just got down there right in his face. Just got up there close, just as close as he could, and he said, "I will". And he touched him, and that caused so... He couldn't believe anybody had touched him.

Immediately, the death proceed apart, immediately. But there's something else involved here. I understand it, but it still does not excuse it. Thank you, Lord. And he charged him to tell no man, and you can write in there until you go and show yourself to the priest and offer for your cleansing according as Moses commanded for a testimony unto them, but so much more went there a fame about him and great multitudes came together to hear and to be healed by him.

Now you check it out, particularly in the book of Mark. Well, let's just go back over there. Mark chapter one. This is almost completely, almost totally overlooked. "Jesus", verse 41, "moved with compassion, put forth his hand and touched him and sayeth unto him, I will be thou clean. As soon as he had spoken immediately, the leprosy departed from him, and he was cleansed. He straightly charged him and forthwith sent him away and said, see thou say nothing to any man, but go thy way. Show thyself to the priest and offer for thou cleansing those things which Moses commanded for a testimony. But he went out and began to publish it much and to blaze abroad the matter in so much that Jesus could no more openly enter into the city, but went out in desert places, and they came to him from every corner". He disobeyed him. He disobeyed him.

Now, I don't know what happened to him after that. Absolutely he's made whole, yes. And absolutely Jesus of course forgave him for that, but that was outright disobedience. That's disobedience. Now, I must make this clear and make this plain to you. When someone in my position or Billy Burke is ministering, or Tracy Harris is ministering in one of his miracle service, Terry Miser's ministering one of his miracle services, whomever it is that's anointed of God and a word of knowledge comes, and someone says or like I might say, anyone who has a...

Well, let's say, well anyone who has any skin disease, skin disease only, come and line up right over here. And there's say eight people, and you begin to lay hands on, and then all of a sudden there's 30 people and you get down here. Where's the skin disease? Well, I don't have a skin disease. Well you ought to go sit down. Because 99% of those don't receive anything. Had you been obedient, you could have received it right where you sat. "But I wanted hands laid on me". Well, so does everybody else. But disobedience is not the way to get it. Amen.

Now if you're out in a public place and there's just every kind of thing there you can think of and people there that don't even know the Lord, oh yeah, they get it. That's the easiest ones of all to get miracles. But when you get into situations where people like you, you've been taught and you know and you understand, oh you really have to be aware because the devil's not going to let you get away with anything that he can stop. And disobedience will shut it down. I've seen it over the last 50 years. My goodness, I've seen it over and over and over. And I've heard other ministers of the gospel, I've heard them say it.

"Oh my goodness, I'll be so glad when we get these Pentecostal people out of the line and get over here and get these other folks where we can get some miracles". It took me a while to understand that. There does come a time from whom much is given, much is required. And when you know certain things. It comes a time you need to be growing up. When you're a baby Christian, your pastor lays hands on you. You just get healed, just, you know what. And then you get to where, I don't understand this. It seems like the pastor prays, but maybe he's lost the anointing. He hadn't lost the anointing, you big baby. You need to be up there in that line laying hands on other people.

If you had... and I'm very, very serious about this. Even if you're in pain, even more so if you're in pain, like I told you earlier, you're so sick you couldn't get out of bed. You can get yourself up and get to church. Nine out of 10 times, you'll be healed before you ever get there if you're not fussing with your husband on the way or fussing with your wife or your kids on the way to church and then walk through the door and, "Yes. Amen. Glory to God". Grow up. Amen.

I thought about this last night and this is a good place to tell you about this. Years ago, they brought a dentist. He was on a gurney, strapped to it because he was having hard seizures every five, 10 minutes. He was in a coma and they brought him into the meeting strapped to this gurney, and Jerry was on one side and I was on the other. And we both laid hands on him.

Now when we laid hands on him, the seizures stopped. Never did have another one. So they were continuing to do this and a week went by. Got into the second week and she was, I mean she was very consistent about it. And now I'm pointing out two things, totally merging, but obedience to the instructions. I didn't come up with that. That came as a word of knowledge. Amen. A Word of God's knowledge concerning a present circumstance or thing. Word of wisdom concerns God's knowledge of the future.

Now he never did have any more seizures, and we're into the second week, and a friend of hers came over. And she had been reading to him all morning and she said, "Tell you what, you take over and read here. And I'm going to go ahead and fix", I think it's lunch. Anyway, she said, "And you continue reading right here". So she did. She was just sitting there next to him. He used to do... He's still on this gurney. He's just laying there and she's just reading away. All of a sudden he sat right straight up and said, "Nobody knows the trouble I've seen".

Don't ever talk doubt and unbelief around somebody that's in a coma. Don't you ever do it. Don't ever do it. They can hear you. They can hear. I don't care what the medical people say to you. That person is alive on the inside trying to get out of that place they're in. Trying to make that connection again between the brain and the body and the spirit. Hallelujah. You just keep the word going. I have testimonies of last minute. And the family, that is the reason why assisted suicide is murder. That is murder. Don't you ever forget that. Don't you ever forget that. Just don't go there. "Well, I'm without hope". No, you're not. Not as long as God's still alive. "Well, what if they die"? Well, so what? Did they know Jesus? "Well, yeah". Well, shout the victory girl. "Well, I'm not sure". Well, you better trust God. Heaven is full of people. Last second believers.

Oh, Brother Copeland live their whole life like a devil and get it in the last second. Hey, hey, hey. Jesus, your Heavenly Father, is not trying to keep people out. He'll take the last nanosecond. There won't be much reward, but I want you to know the least heaven has is way better than the best hell's got. Amen. Well, you say, "I don't believe that". Well that's your problem. I believe in a merciful God.