Kenneth Copeland - Release Your Faith by Using the Fundamentals 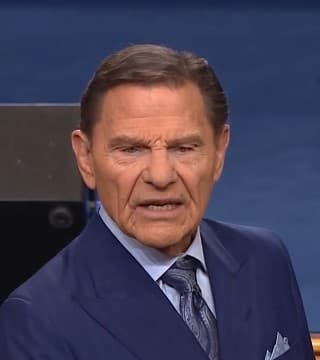 It's amazing to me. I've been watching people from... Just in few days, it'll be 53 years. Actually longer than that. Because Gloria and I got saved six months after we got married and then three months later we both of us got baptized in the Holy Ghost speaking with other tongues. And I've watched people in attempt to receive and they frown. Come on! Hey! It didn't get any better than this. This is not work. This is just yielding. "I might get the wrong thing". Oh, shut up. Jesus already dealt with that. He sure did. Yeah, He dealt with that. You, being evil, know how to give good gifts to your children. Are you going to give them a snake or a scorpion when they won't food? He was referring to evil spirits when He said that. Amen? Isn't that right, Thomas? I mean, that's what He was doing, man. He told me you ain't going to get a devil... What's the matter with you?

Now if you're not born again, that's a different story. If a son... Well, it only takes you 10 seconds to get born again. "Copeland, it can't be that easy". There wasn't anything easy about it, but Jesus did all the hard part. There's only one thing he couldn't do. He couldn't pray your and my acceptance prayer. We had to do that. Jesus, God's gift to the world. He's a free gift. The basic fundamental of faith. Believe it in your heart. Say it with your mouth. Faith will not work in an unforgiving heart. You cannot receive Abraham's blessing with Thomas' faith. And the last one of them... Of course, we could go... But these are just the basic fundamentals. Faith calls things that be not as though they were. Not as though they are, as though they were.

The Lord said to Brother Hagin, "I said call things that be not as though they were. My people are calling things the way they are and now so they stay that way". Amen. Call the way they are... And I just got... Oh Charles Capps, my my my. Oh my. Oh, You talk about somebody that... He's in heaven today. Glory to God. Glory to God. Oh that Charles. He just has a way of putting things. He said "Here dog! Here dog"! Somebody said, "what are you doing"? "I'm calling the dog" He said "what's the matter with you? Your dog's laying right there"? "Yeah", he said "I know, but I'm calling him". "what"? "I'm calling my dog". "Look dummy, your dog is right there". "I know, I'm calling him".

It just takes you a little bit of this... But in reality, that's what people do. Calling things the way they are. Well you know how it is Brother. I'll call them like they are. I know it, that's the reason you ain't got nothing else. Tonight I want us to... Of course, the basic fundamentals are outlined in Mark 11:22 through 25, but this, first of all, let's go to Matthew 21:21. Matthew 21:21. It's Matthew's account of the fig tree.

All right, Matthew 21.:21, are you there? Jesus answered and said unto them, verily I say unto you, if you have faith and doubt not, you shall not only do this, which is done to the fig tree, but also if you will say under this mountain, be thou removed and be thou cast into the sea, it shall done. That settled that. He's talking about physical things... spiritual things too, of course. That's a higher ranking area of faith anyway. Amen. The greatest miracle of your life was when you got born again. That's the most powerful thing that's ever happened. Amen.

I had the Lord ask me that one time. He said "Kenneth, what is the greatest display of power"? I said "there's no question about it. It's when you said light be". "Oh no". He said, "that was easy". He said "I didn't have anybody against me on that one". He said "They were all for me, but when I raised Jesus from the dead... When I raise him out of hell", he said "it was all against me. People were against me. The devils were against me. All of hell itself was against me. He's in hell and nobody's ever gotten out of there before".

What happened? Jesus... Hey, listen to me. You have to have this. You have to get this. Who, who, get your catchers out? Jesus, the first born from the dead. He's the first human being, Mark Barkley, to ever be born again. Isn't that something? The new birth. The first one happened in the pit of hell with all the demons of hell against it. Arrayed against him felt they had Him forever. He was so emaciated he no longer looked like a human being. Read it in the 52nd chapter of the book of Isaiah. The new birth took place. The re-creation of the human spirit. The death of a human spirit and its rebirth.

Now, can you see why the new birth is such a powerful thing? Well, of course it happen to us, but exactly the same thing happened to us that happened to Jesus. So that's the most powerful miracle in the universe. Amen. And it happened to us. Go back and think about little Mary. And the angel came in and explained to her and she said, "How can this be seeing I know not a man"? If you allow me, I'm going to paraphrase this. The Holy Spirit, of the living God, will come and he will hover over you and a Holy thing will be born in you from that Holy seed. You and I, we're born again, not of corruptible seed, but by the word of God come out. It's the same thing that happened to her by the word of God. Not of corruptible seed, but incorruptible by the word of God, which lives and abides forever. Hallelujah. Hallelujah.

See, you don't say anything but the word. See what he was telling Joshua? He's about to go back over there for the first time in 40 years. "But you meditate there in day and night that you may observe..." That means to see... "To do according to all that's written therein for then thou shalt make thy way prosperous and then thou shall have good success..." Or do wisely "meditating in that word, have I not commanded thee be strong and of good courage. Be not afraid, neither be thou dismayed for the Lord thy God is with the whether so ever you go". Verse 13 "remember the word which Moses, the servant of the Lord, commanded you saying the Lord your God has given you rest and has given you this land".

Well, we're in the shadow of it all the time. We're living in the 23rd Psalm right now and that's spiritual death more than anything else. The spiritual death is a frightening thing. But not for us. We've already died. We've already done all the dying were ever going to do. Yeah, we died the death of the cross. We died with him. Resurrected with him. Did you ever notice that anything he got, we get? Anything he received, we receive? Hey, he got born again, so we got born again. He's no longer called the only begotten son of God. He's the first born of many brethren. glory. He gets resurrected. He got a glorified body. We get a glorified body. Thank you Jesus. Thank you Lord Jesus.

Fundamentals of Faith. Fundamentals of the love of God. And in these last moments, we'll close by looking at the woman that was healed of the issue of blood. Jesus said, "Thy faith has made the whole". She believed it. She said it. She acted on it. Then she testified of it. When Jesus appeared to Kennedy E. Hagin back in 1950 and Brother Hagin asked him about it. He said "Am I right in this sermon that I began to develop, this woman with the issue of blood"? but he said "that there's a point missing here. He said she believed it. And she said it and she acted on it according to James with corresponding action, but he said, it just seems to me like I'm missing something, Lord". And He said "you are". He said "she told it". She testified to it. He said "anybody that'll do those four things can receive anything they want or need from me". Fundamentals of Faith. Say I got it.