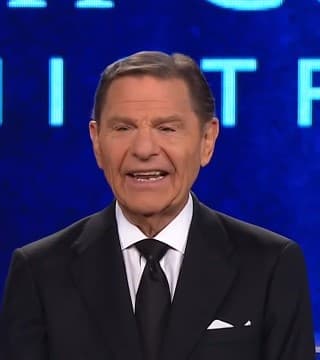 There are a number of ways to receive your healing more than one. The top is to just take the word of God, the healing scriptures and just stand on it. Amen. That's right at the top of the list. Then, there's manifestation of healing through the gifts of the spirit, through manifestation of gifts of healings, word of knowledge, working of miracles, special faith and so forth, the nine manifestations of the Spirit of God. Remember Matthew 4:4, "Man doesn't live by bread alone, but by every word that proceeds out of the mouth of God". Amen? All right, now watch this one.

FEMALE: I got healed online.

FEMALE: I had a stroke. I used to be a professional pianist and used to play in healing meetings like this.

BILLY: Okay, and you were watching online from where?

FEMALE: Sir, from Farmer's Branch in Dallas, Texas, which is about 45 minutes to an hour away.

FEMALE: And I asked the angels to get us here. I said, husband, we have to go my husband Breck.

FEMALE: And then on the way you called for shingles, my husband has shingles.

BILLY: Okay, but I'm talking about you. You, you, you.

BILLY: Come on. Come on church.

KENNETH: And the guys that went out to the car to help get her out of the car. She was like this. She have just in this little ball and they had to... Her husband picked her up and set her down in that chair like this. Now, by the time she got inside, she had come to this. I want you to... No. Okay, go ahead.

BILLY: Your name, wow, wow, wow. Can she stand?

BILLY: So this vibrating this shaking. Tell me what this is. These tremors. What caused this?

MALE: Hashimoto's thyroiditis and it's... She has over 80 illnesses and..

BILLY: Over 80 illnesses, caused by what?

FEMALE: I came all this way. Yes, Jesus. I can feel my toes.

Now we just moved into multiple, I mean, you could identify the laying on of hands. You could identify the word of knowledge. You could... I mean, it just... There's massive things going on in that miracle environment. We're in that miracle environment in here today. Now before going any further, sometime... I looked it up again last night. Oh, excuse me, the night before. The word Testament and the meaning of it just in the dictionary. It is the last will... Come on.

Well, I wonder if it's God's will to heal me and we'll read his last will and Testament. God wrote his own will, died to bring it to pass, raised from the dead, and now, amen. He sits over his own will to bring it to pass. He is the executor of his own last will and Testament. Don't ever, ever forget that. Don't let anybody ever talk you out of it. It is his will. It is his will. Now the devil is the one who started that mess through religion and all of that, but it's not true. Jesus said, your tradition or your religion makes the Word of God no effect. And I got hold of this way, way, way, way back there, way back.

And I though this, I thought, "You know, if God ever healed anybody, he's going to heal me". He's no respecter of persons. Amen. And the scripture said he healed everybody that needed healing. Now don't get the idea, there are incidents where Jesus healed them all, but he didn't heal everybody everywhere all the time.

Now there are those that would receive it and those that wouldn't. The scripture does say he healed all manner of sickness and disease. There was not any sickness or disease of any kind that he did not heal, including raising from the dead, hallelujah. Well, all that's passed away, I need the evidence of it. We're going to take this to court this morning. I need evidence. God would have changed his name. He is Jehovah Rapha, the Lord that healeth thee. When did you change your name, Jesus? From I was? Isn't that... Brother Hagin had a saying that I really enjoy that is "ignorance gone to seed", and I said it more properly ignorance. In Texas, we have a saying, "That's ignorant" Amen. Okay. Watch this!

JENNY: I'm Jenny Cooney and I'm from Living Word Christian Center is our home church and we're from Elk River, Minnesota. And I was painting with some friends and I had just come down off the ladder and looked up and saw that I had missed a spot. And so I'm like, "Ah. I had to go up, get that". And so I climbed up to the top and I had to stand on the very top, which you're not supposed to do and reach for the spot. And when I reached for the spot, the ladder started to tip. And my only thought in my mind at that time was is that, "I don't want to fall on this ladder".

And so I used my legs and pushed it away. And so when I did that, it pushed my feet up. And so when I landed on the ground, I landed on PVC piping straight across my shoulders. And so I laid there for a few minutes and went, "Oh, that hurt". And so they called the paramedics and they came and took me to the hospital. They shot some x-rays and when they came in and realized the damage that was done, they immediately took me into MRIs and CAT scans. And when they came in and said, "You're not getting off that back board, you broke your back in two places and you broke your neck".

The one in my neck was C7 and they called it a burst with a retropulsion, which means the inside of my vertebrae exploded and there was fractures all the way around the outside of my vertebrae. And it also pushed back towards my spinal column. And they said they didn't want to have to do surgery because of how mobile that I was because they would've had to fuse all the vertebrae in my neck. And so put me in the brace and they told me that rehab for something like this would take anywhere from 12 months to 18 months before that I would have full mobility in my neck. And so I'm like, "No, I don't think so".

And the first night in the hospital, God gave me a scripture and it's Luke 8:48 and it says, "And he said unto her daughter, your faith, your trust and your confidence in me has made you well. Go enter into peace, undisturbed wellbeing". I had total peace about the whole thing that, "You know, God, Hey, I'm getting a miracle off of this". So it was a Thursday night. First night that Brother Copeland was here and I had my full body brace on and my husband said, "Do you want to go"? And I said, "Oh, you bet. I want to go". And so we came and brother Copeland got done preaching and he stopped and he was walking back and forth praying and all of a sudden he stopped and he goes, "Somebody is getting healed right back here in the back of your neck". And right away I'm like, "Oh! That's me". And he prayed some more. And he goes, "As a matter of fact, you're not going to have surgery".

KENNETH: But I heard the Lord say this, "I'm putting that vertebrae in there right now and you won't have any more pain. That will not be a weak vertebrae. It'll be the strongest one in your spine now".

JENNY: And right away I said, "I claim this in the name of Jesus, that's mine". And so after we got done, I was just like, "Yes, this is me". The next morning I got up and God said, "I want you to feel the back of your neck". And in my brace, there's this little piece that was open and that's where my C7 was. And he said, "Now, feel back there". Because it was when you looked at my vertebrae, it was pushed out. And so it stuck out. And so I put my finger back there and I'm like, "Oh, it's in place". And so I walked into the kitchen and I looked at my husband and tears are coming down my face. I said, "I've got a new vertebrae". And he goes, "I know you did" and stuff and I so bad wanted to go to the doctor right away.

And God said, Nope, "I want you to wait until your next two week checkup". And I went, "Okay". And so we went in and every time I would go in, they shot x-rays and we went in and he had the x-rays and stuff. I just couldn't wait to get into the room and ask him and he put him up and he looked at him and I looked at him, I said, "What do you see"? And he goes, "It's like a brand new vertebrae". He goes, "It's like a baby". He goes, "It just needs to mature". He knew what was going on. He saw all the brokenness in that vertebrae and that it should not have been a brand new vertebrae in there, so it was just like, it's one of those aha moments where it's just like, "Yes, yes, God".

KENNETH: Hey, come on! Hallelujah. Now that was a manifestation of the word of knowledge. Now it took that little baby vertebrae two weeks to grow up and be the same size as the others. Oh, we serve a mighty God.