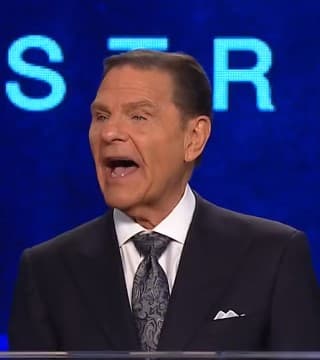 Acts chapter 10 verse 43. To Him give all the prophets witness, that through His name whosoever believeth in Him shall receive remission of sin. While Peter yet spoke these words, the Holy Ghost fell on them which heard the word. And they of the circumcision of the Jews which believed were astonished, as many as came with Peter, because that on the Gentiles also was poured out the gift of the Holy Ghost. For they heard them speak with tongues, and magnify God. Hallelujah. Whoa. Glory be to Jesus.

Acts chapter 19. Praise God. Acts chapter 19 verse one. It came to pass that while Apollos was at Corinth, Paul having passed through the upper coast, came to Ephesus, finding certain disciples. And he said unto them, have you received the Holy Ghost since you believe? And they said unto him, we've not so much as heard, whether there be any Holy Ghost. And he said unto them, to what then were you baptized? And they said, unto John's baptism. So, here's a group of Baptists in if an Ephesus. Well yeah. Amen? Sure were. Yeah, that's what they were. Yeah.

Then said Paul, John verily baptized with the baptism of repentance, saying unto the people, that they should believe on Him, which should come after him, that is, on Christ Jesus. When they heard this, they were baptized in the name of the Lord Jesus. So now, they were baptized in water, in the name of Jesus. When Paul laid his hands upon them, the Holy Ghost came on them; and they spoke with tongues and prophesied. Glory be to God. Yes. They spoke with tongues and they spoke edification, exhortation, and comfort. That's simple prophecy. Yes.

Now, that leads us then into 1 Corinthians. Shall we go there please? In the 12th, 13th, and 14th chapters. Now in the 12th chapter, we're introduced to what is referred to as the gifts of the Spirit. Actually, maybe a better expression would be manifestations of the Holy Spirit. This is the way He manifests himself. A person that's born again, but has not yet received being baptized with the Spirit... But don't... Hey, don't you or anybody else ever say that a person like that does not have the Holy Spirit, because you do. Amen.

There are nine fruit of the Spirit, and without the nine fruit of the Spirit, you're not going to get into the manifestations of the gifts of the Spirit. The fruit comes first. Love, joy, peace... Starting with love always. That's God- That's right. Who has joy, and the joy of the Lord is your strength. Amen. If you're having physical weakness and all of that, check out your joy. Check out your joy. Amen. You don't have to feel good to have joy. Yep. The joy is in there, if you're born again. Now develop it. Develop it. Glory to God. Thank you God. Glory to God.

My goodness I remember, back in early days, got attacked so many different ways. One time I got my big toe so infected I could hardly get my shoe on. Oh man, I didn't want to go preach and walk around on that foot. Come on, put them shoes on and go. Yes sir. It wasn't because I was so tough, because I cried all the way to the car. But you get over in the Spirit while your body don't count. That's right. That's right. He shut the thing down. Go anyway. Yes. Got so sick in Oklahoma City, I couldn't get out of bed. Just woke up one morning with all the flu symptoms so bad, I could not get up. I could not get out of bed. I had a morning service, and I could step out on the floor and this room would just go around so bad I'd just fall over.

So, we were staying in the home of a widow woman. Boy I'm telling you, Lavinia James, you talk about a war horse for God, this woman was just dynamite. She was so powerful. She had been healed of cancer in Oral Roberts meeting and she just started going to all the old BrotherRoberts meetings, taking every sick person she could find and getting them into those meetings. Praise God. Well, we were staying in Lavinia's home. I was preaching at a church there, and, BrotherHartfield...

Oh, I said, "Gloria, you have to help me". So... And just lying in the bed. She helped me and got me undressed and I said, "I'm either going to have to go unshaven or you're going to have to shave me". Well ain't no way I'm going to trust her with that blade. So she said, "Lavinia, do you have an electric shaver"? She said, "Yes I do". Gloria caught me by the hair, and held my head up like that and shaved my face. I have no idea what it looked like. But it evidently did pretty good. So, Lavinia drove, and got over there to the church, and I walked up to the pulpit. And I'm telling you, I walked up there and caught a hold of that, and the room started spinning. And I was about to fall on the floor. And I said, "I'll be right back".

Well, the choir practice room was right behind the platform there, and I just went around and went in that choir room. And I want you to know, with a loud voice, a loud voice. I've learned there are times when you have to speak with a loud voice. Yes. Yes. Most especially in other tongues. Other tongues. Look at this. Look at this, right here. In chapter 13. Though I speak with the tongues of men and angels and have not love. Well I was walking in love, glory to God. And I intend to speak in the tongues of men and angels, glory to God. Particularly talking to the devil. Amen.

Take your filthy hands off body. This body belongs to Jesus and Gloria, not you. Yes. And I just went after him, with everything. Just went. Walked back out there, glory to God, and then caught a hold of that pulpit and it started trying to wave around a little bit. Glory to God. Show I just preached on healing a couple of hours. Praise God. Walked out of there completely well. Amen.

You see these tabs in my Bible? Those are the healing scriptures that I got out of her book. Put your eyes on these. Feed on them. Yes. Yes. Hallelujah. Yes. Talk about them. Like I was saying earlier, school yourself into it. Hallelujah. That's right. You just, you just start... See, faith automatically comes. Hallelujah. You don't have to feel something. It comes. Yes. It knows what to do with the Word. This Word, these words are filled with the faith of God. That faith is in here. That victory is already in this book. This is the victory book. Yes. Yes.

Faith cometh by hearing, hearing by the Word of God. And when you're hearing the Word, faith is coming right now. Yes. Faith is coming right now. It's coming. It's been coming all week. I'm telling you by Saturday tonight you're going to be drinking gunpowder soup, praise God. Amen. Hallelujah. Eating tiger meat. Chewing nails. Oh, listen to Bill Winston long enough and you'll pull your shirt back and there's Super Bill. Oh, don't ever listen to Bill Winston right before you go to bed. I made that mistake once. I've never done that again.

Well I can't say I've done it yet. But I'm telling you one night, I got so thrilled listening to him. I've got him on the DVR, and I got so thrilled listening to him. I jumped up and I'm stomping up and down in the middle of the bed. And now I've got to lay down and go to sleep, are you kidding me? No, you watch Bill in the morning. Hallelujah. Glory, yeah. Praise God. Thank you Lord Jesus. Can I give you just a little word about watching the reverend. These are deep now. Sometimes the mustache is there, sometimes the mustache is not there. I'll say, Gloria, the mustache is there tonight. We both laugh. She said, "Its a little smaller today. Pay attention to what he says and not his mustache".

Well now, Bill is in the very same position that I am in, as a prophet of God. Come on. He married way above himself. That Veronica Winston is the reason that man is a success. Yes. The reason that Gloria Copeland, is the reason that I'm a success. Same thing is true of you too Tom. Amen. Hallelujah. Because it's these praying women. Come on. Veronica Winston can absolutely pray heaven and earth together. Come on. She reminds me of my mother. She's another don't quit, don't give up, tongue-talking woman. That just stays there like Darlene. Amen.

Where's your hat, Butch? Stand up Butch. Ain't nobody ever seen you without your hat on, man. Turn around and look at somebody. The cowboy preacher. Thank you Lord. Thank you Jesus. Did you get anything out of this, this morning? Yes. Yes. Glory to God. Thank you Lord. Our time has come.

I want to go back over there and I will close with this. 16th chapter of John. I want to look at this again. Look again at verse 13. Now we've stepped into a place where we can touch this. How be it when He, the Spirit of truth is come. He will guide you, into all truth, for He shall not speak of himself, but whatsoever He shall hear that shall He speak. He will show you things to come. He shall glorify me for He shall receive of mine and shall show it unto you. All things that the Father has are mine. Therefore, I said he'll take what's mine and he'll show it to you by praying in the Spirit, by listening to the Spirit, by walking in the Spirit, by walking in the love of God.

I want you to know we can find out anything God knows that pertains to our life and our future. Yeah. And now you can understand what I'm saying when I say, praise God. You pray in tongues long enough, you can find out anything you need to know. The only reason you haven't spoken in tongues is because you haven't, if you're born again. Well, I'm afraid I might get the wrong thing. Well, the keyword there is afraid. Yep. What kind of a God do you think you serve? Come on.

11th chapter of the book of Luke. That's absurd. Verse nine. I say unto you, Ask, it shall be given you; seek, and you shall find; knock, and it shall be opened unto you. Do you believe that? Yes. Yes. You're agreeing with it, but do you really believe it? Yes. Then get over there on Mark 11: 23, 24, and 25 and don't get off of it until you do. This is written in red, you understand? This is the master himself speaking. If a son, you have to be born again before you begin to seek the baptism with the Holy Spirit. Yes. If a son shall ask bread of any of you that is a father, will he give him a stone? Or if he ask a fish, will he for a fish give him a demon? No. No. A serpent? No. No. Or if he shall ask an egg, will he offer him a scorpion? No. No. That is a biblical impossibility with God. That's right. Your fears are unfounded. If you then being evil or being natural, know how to give good gifts unto your children, how much more shall your heavenly Father give the Holy spirit to them that asketh?