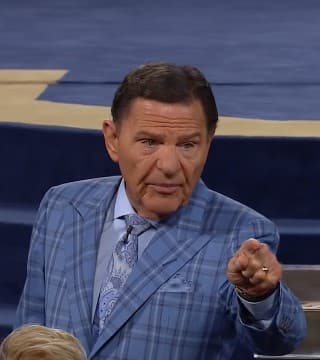 Thank you my dear Lord. We come before the word tonight, expectant hearts, and we thank you and I'm asking you for the anointing of God tonight. Rise up and live big within me tonight, oh greater one, my teacher, my comforter, my stand-by, my intercessor, my strengthener. Thank you, Lord Jesus, that I speak this word accurately and that the people are anointed to hear equally as accurately, and together not one person in the sound of my voice will leave this service tonight untouched by the power of the living all mighty God. I pray it in the name of Jesus and I fully expect it to come to pass. In Jesus' name, amen.

Let's go to Isaiah chapter 40. Thank you, Lord Jesus. This was before the foundation of the world. Thank you Lord. Now tonight I want to read this, a portion of this. All right. Isaiah 40, now this happened before he said, "Let there be light". Verse 12, question, "Who has measured the waters in the hollow of his hand, and measured out heaven with a span, comprehended the dust of the earth in a measure, and weighed the mountains in scales and the hills in the balance? Who hath measured", this is the Classic Amplified, "Who hath measured the waters in the hollow of his hand, marked off the heavens with a nine inch span"?

The first time I read that I quickly grabbed a ruler. I have an eight and a half inch span. "Say, well Brother Copeland, don't you understand Jesus is a man? He just gave us the dimensions of his hand". A good amen would have fit right in there. Amen. Glory to God. Thank you Lord. "Weighed the mountains in scales and the hills in a balance". Think about it. One drop of water and he weighed the oceans. When all the... he had to plan the tides. When the oceans, if you could see it, they heap up like that, like mountains and then they go back. And then can you imagine what the Pacific Ocean weighs?

And you know there's coming a day, there's coming a day... I don't think it's very far away. There's coming a day when all of us are going to get together during the marriage supper of the lamb, all of us get together, and we're going to go to school and get all the doctrines straightened out. Oh yeah. Oh yeah. Oh yeah. Amen. And then the Lord, you know, I mean you know, he's been here, brother. He put up with this mess. Think about the kind of doctrine he had to deal with. Amen. He preached blessing. They preached curse. Anyway, it was a doctrinal fight that got him killed. They thought. Oh the glory, glory to God.

Well, yeah. You and I stayed with it. We came into this pig pen down here and fought the good fight of faith and wouldn't quit, glory to God. And just stayed with him anyway, and just let the devil hang himself, praise God, who is he anyhow, zero. Brought to naught. Naught means zero. Glory to God. He's been destroyed. He no longer has the power of death. He's over. All he has left is the threat. I was meditating on this one time and I had to... Jerry will remember this, I'd been thinking about it and what I was thinking about is, we walk through the valley of the shadow of death. We're not walking through death. We walk through the valley of the shadow of death. Amen.

It's big man, it's a huge revelation. Hey, hey, there's a table prepared before us. That's not a heavenly feast in the 23rd Psalm. You don't have any enemies in heaven, glory to God, in the presence of our enemies. But he can't come to the table, Jack, glory to God. Hallelujah, Jesus. He's not... No, no. This is our table. Pass me some healing. Pass me that bowl of prosperity over there. Oh man, pass me that bowl of debt free life. Give me that thing. Lick the platter clean. Glory to God, hallelujah. Thank you Jesus. Amen. The great planner.

Now we got selected out of there and so we're in the Lamb's book of life, but that life book, that's destinies. Everybody's life, all planned perfectly. Just laid out. The devil's not included in that. God laid that out before the foundation of the world. And you want me to tell you something else? God almighty could make everybody on this planet, everybody ever supposed to be born on this planet, rich beyond their wildest dreams all at the same time and never touch his reserves. No. He said in my heart one day, he said, "Kenneth, I've got a million ways, a million ways to make you a billionaire. You can't think of three".

Let's see. Oh man, somebody give it to me. Somebody give it to me. That's how limited we are. Now I get over in the spirit, start praying in the spirit in tongues, that's when you start praying those things out because God had all these businesses planned for you. He had all of these things planned out besides your name before you was ever born. Glory to God. Then you got in down here and you know, and then the devil got in there and messed the thing up. But I want to talk to you tonight about the great planner. The one that weighs dust in the palm of his hand. Thank you, Lord Jesus.

So go with me to Genesis chapter 37. Praise God. Genesis 37. "Jacob dwelt in the land wherein his father was a stranger, in the land of Canaan. These are the generations of Jacob. Joseph being 17 years old was feeding the flock with his brethren". So Joseph, just a young teenage boy, 17 when he had that first dream. Just a kid had that first dream. Now then, turn to Genesis 37:20. You need to go through and just read all of this fluid. We don't have time of course to do that tonight, but I'm going to point out some things to you here.

37, well let's back up before we get down that far. Verse 12, "His brother went to feed their father's flock in Shechem. Israel said to Joseph, do not that brethren feed the flock at Shechem? Come, and I'll send thee unto them. And he said to him, here I am. And he said to him, go, I pray thee see whether it be well with your brethren, well with the flocks, bring me word again. So he sent him out of the vale of Hebron and came to Shechem. A certain man found him, behold he was wandering in the field". He's lost out there. "He's wandering in the field, the man asked him saying, what seekest thou? He said, I seek my brethren. Tell me, I pray thee, where they feed their flocks? The man said they are departed here. I heard them say, let's go to Dothan. And Joseph went after his brethren and found them in Dothan".

Now get the picture here. Here is a young 17 year old boy, highly pampered. He's never had to do a day's work in his life. All his brothers had to do all the work. Now you do understand that this, they didn't know it at the time, but this is the most important family on the planet. These are the tribes of Israel right there in that one household. And they were really messed up. They didn't know who they were, of course not. So the first thing you see is this little guy, I mean, he's never been away from home. He doesn't know anything. He's just wandering around out there and he's lost. But God had a plan. He already had somebody waiting on him there. I'd rather debate the fact whether it was man. It very well could have been an angel. But on the other hand, it doesn't make any difference one way or the other because God already had the guy planned and already him moved around.

Now, may I remind you, the prophet Micah said there's a baby going to be born in Bethlehem. 715 years later that baby was born right on time, right in the spot, and he had to put it in Caesar's mind... that word, put it in Caesar's mind to have everybody go back to their home town to pay their taxes. And I may remind you of something else, poor folks don't pay taxes. Joseph, is a well to do man. He had to be in Bethlehem. He had to be there and that word, that word spoken by that prophet 715 years before, controlled armies, it controlled nations, it moved people, it moved things, and right until the very second, the very moment, the very absolute moment in time that baby was born right in the right spot. Hallelujah. Praise God for evermore. Oh, glory to God. Thank you, Lord.

You talk about a planner? A planner? The dust weighing God is planning your life. How far back do you think the planning of this service tonight? I'll tell you, I've got it in my heart, I'm going to be there. I'm going to be where I'm supposed to be. I'll just seek God and seek him and seek him and praise him and praise him, because I found this out. A lot of times when you're...

Stand up here Terri and help me a second. When you're going your own way, and you're kind of bouncing around here and he's doing his best to bump you back over there on that line and you keep fussing with him, and keep fussing with him. And there'll come a time when he'll just let you go on. Come on. This is the God that planning your life. This is the God that knew your name before the foundation of the world, and he's right there on the inside of you right now. I'm telling you, he's in there. He lives there, and Jesus said when he comes he'll abide with you forever.