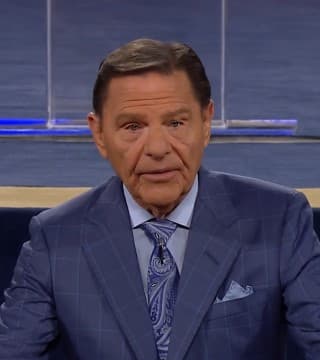 There's some very basic fundamental things about spirit, soul and body that need to be demonstrated and understood. Now we're talking about faith. Before I get into that, therefore I say unto you whatsoever thing you desire. When you pray, that's when you believe. That's when you start believing. Now faith is a spiritual force. You can't necessarily feel it. You can sometimes feel the results of it, sometimes you don't. Well, how do I know if I'm believing? Same way when you ask your mama, how am I going to know if I'm really in love? And she looked at you and said, "You'll know". That didn't make much sense when you was 12, but oh, I learned it. Glory to God.

October the 30th, 1961, in Little Rock, Arkansas. I laid eyes on Gloria Jean Neese. Glory to God. It hadn't been but a few days before I made this stupid statement. I don't know whether love's real or not. If it is, I'm incapable of it. I was mad at the world and everything in it just about until I saw her. Boy, it blew that deal out of the tub. Amen. Love is real, God is love. That's beyond real. Whoa. Thank you, Lord. When you stand praying, forgive. You believe you receive when you're praying and at the same moment you forgive. Well, I don't have anything against anybody. Well, do it anyway. Amen.

You'd be surprised when you start doing that, that God will just start bringing things up to you, bring things up. Oh, yeah. Okay. Yeah, but that is just a little thing. I've had people actually tell me this. Brother Copeland, you know I've been waiting and waiting until I had money to send into the ministry and oh, I'm a partner and I want to support it financially, but I couldn't send over about five dollars. You and 25,000 others did the same thing. See how it compounds? It could have been a whole lot more than that. Your five dollars counts. Amen.

The minimum required to be a partner with Kenneth Copeland ministries is two cents. That's the Bible minimum. Surely you can spare a nickel. Sow something. That's the way you just sow yourself out of the, just keep coming up one rung at a time. Glory to God. Amen. These are all faith principles that we need to just stab at them and remind ourselves of them. It sounds like kind of a scatter barrel this morning, but it isn't. Because here's the things we know. These are things we must be reminded of. Amen?

Now then, look at that again. When you stand praying, forgive if you have ought against any so that your Father also which is in heaven may forgive you your trespasses. That's spiritual law. Our Father, which art in heaven... Hallowed be Thy name. Thy kingdom come, Thy will be done on earth as it is in heaven. Give us this day our daily bread and forgive us our trespasses as we forgive those who trespass against us. As we forgive those that trespass against us. He said it, didn't He? It don't work the other way around. It is seed, time and harvest. It is not harvest, then plant the seed. That's not the way cycle starts.

Well, which came first? The chicken or the egg? The chicken, dumb dumb. You don't get chickens without eggs unless the government's changed that, but I don't think they have. Well, forgive me for calling you dumb dumb, meathead. Oh, that's scriptural. Meathead is scriptural. Carnal minded. Chili con carne. Chili with meat. Head. Oh, there's something on this place this morning. Aww, Hankins is here. That's what did this. Oh, thank you, Jesus. Praise God.

All right. Look at Matthew 21:21. Well Brother Copeland, you see these are just spiritual mountains, not actual mountains. Well, let's see if Jesus agrees with that. Jesus answered and said unto them, verily I say unto you if you have faith and doubt not, you shall not only do this which is done to the fig tree. Well, that was not a spiritual fig tree. But also if you say to this mountain be thou removed, be thou cast into the sea, it shall be done and all things whatsoever you shall ask in prayer believing, you shall receive. You will. You will. Jesus said whatsoever you ask the Father in My name, He will give it you. Ask and you shall receive that your joy be made full.

Now you can exercise the joy of the Lord which is your strength as I said right in the middle of terrible and horrible pain. But your joy becomes full when the thing is totally manifested. Hallelujah. And you walk out of there with a healed and well body. I know. I walked in pain because of my own hard headed disobedience for a long time. And I want you to know, glory to God, I am totally and completely pain free. I am healed and made well from the top of my head to the soles of my feet. I haven't been sick in so long. I have remembrance of the last time I actually yielded to flu symptoms. It was years ago.

January before last in the minister's conference, just sitting there right on the front row the symptoms of the flu came on me. I started chilling. I had pain around behind my eyes. Everybody told me about the flu and the flu shots. Well, we took our flu shots years ago out of Deuteronomy 20:8 and Galatians 3:13. Now I'm not talking to you against those flu shots. Do you know what that flu shot is? It's an immune system booster. You can do that, I mean just be a natural human being. Just quit eating slop and start sleeping at night. "Well, I can't". Well, that's your fault. Get the shot. Amen.

It lasted about 15 or 20 minute and it was gone. Haven't had any since then. Amen. Yeah, but that don't work for me. I know it. You know how I know? You said it. When Gloria and I were first learning this, you need a faith partner and you don't get mad when you get caught. I had a serious disadvantage. Gloria could go three days without saying anything. I mean, she's very quiet. And she really didn't just come out until she began to teach and preach the Word. But even so, she just quiet natured to begin with.

I'm just the opposite. She said well, you've done enough talking for both of us. And she's right. And I just, she'd say that's your confession and I believe it. Keith and Phyllis, one of them would say something the other one would say if you say so. Well, it just scared me to death. Really? Think about how the devil schooled us to talk. "Scared me to death, thrilled me to death". Are you going? I'm afraid not. The faith filled words dominate the laws of death. Death filled words and fear filled words will dominate the words of life. They're spiritual laws and they work on the blessing side and they work on the curse side because they are laws. There are words, well we live in a word created, word dominated universe.

A word upheld universe. In the beginning was the word, the word with God and the word was God, nothing created without Him without the word. But you can't change the laws, but you can change the words. And when we begin to speak words of faith, words of God, whether they feel right or not. You go strictly into this book and you get so picky. You're in training. You just don't allow things to come out your mouth you don't want coming to pass. And boy, there's times you just have to just give yourself a pop across the face and say shut up. Because you get in the habit of saying things, you don't hear them when they come out your mouth.

Particularly when some of you say a lot and your parents said it, you said it and now your children are saying it when they're little old kids. "You better stop that, you little fool". "I'm going to kill you". I'm going to tell you something, you keep acting like this Jesus won't love you anymore. Oh. That's a lie from hell. He still loves you, doesn't he? There's nothing you can do to cause Him not to love you any more or any less. Because He's all in. Amen. Everybody that's in hell, He loves them and will never quit loving them. Well why'd He send them to hell? That wasn't His choice. The only man He ever sent to hell was Jesus. Hell was created for the devil and his angels. God didn't intend for any human being to go there. And the only sin that will send anybody to hell is not accepting Jesus Christ as Lord of your life. Amen?

I want to go to the 91st Psalm, if you'll go with me there please. And I want you to see these same principles in operation. He that dwelleth in the secret place of the most high shall abide under the shadow of the Almighty. How do you get into that place? I will say. I will say. Nothing happens in this Psalm until this one man said something. There's three people in this Psalm. This person, that's you and me. And then there's Jesus. And then there is the Father and the Father closes it out. I will say of the Lord, here's the only statement that this man makes. He is my refuge. He is my fortress. He is my God. In Him will I trust. This man just said it and shut his mouth.

I used to get confused at the order, the way it would bounce back and forth. In Him I will trust. Surely He shall deliver you. What? It doesn't say surely He'll deliver me. Now this is where, we're standing on Hebrews 3:1. Hold your place and let's turn over there and look at it. I want you to set your eyes on it. Oh, I'm almost out of time and I've only been here 10 minutes. Wherefore holy brethren, partakers of the heavenly calling, consider the one whom God sent, the high priest of our profession, the anointed Jesus. Jesus is anointed to be the high priest of His words in our mouth. We're not in this alone. We're not just speaking off out into the air or even into the Spirit realm. Jesus is responsible for taking these words of faith and bringing them to pass and seeing to it that they happen because we're standing on Mark 11:23, 24 and 25.