Kenneth Copeland - Release Your Faith To Operate In The Kingdom's Economy 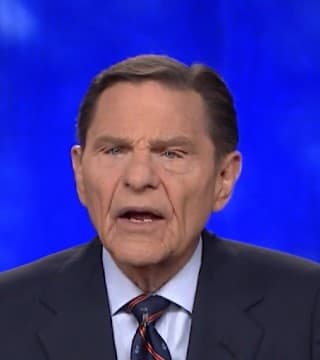 Open your Bibles to mark chapter 10 verse 17 please. "When Jesus was gone forth into the way, there came one running and kneeled to him and ask him, 'Good master, what shall I do that I may inherit eternal life?' Jesus said unto him, 'Why callest thou me good? There is none good but one and that is God. Thou knowest the commandments. Do not commit adultery. Do not kill. Do not steal. Do not bear false witness, defraud not, honor thy father and thy mother.' And he answered and said unto Him, 'Master or rabbi, all these have I observed from my youth.'" That's why he was wealthy. You understand? That's why he was wealthy, "Jesus. Beholding him, loved him," glory, money and all. He loved him and He said to him, "'One thing thou lackest go that way. Sell whatsoever thou has give it to the poor and thou shall have treasure in heaven and come and take up the cross and follow me.'"

I want you to notice something here. This, this is a side issue, but in one way, but yet it's very, very, very important. The only people that Jesus said, come and follow me, became apostles. He said that to the apostles of the lamb, the 12 was this not a proper replacement for Judas. Good thought isn't it. Amen. "And he was sad at that saying, and went away. Grieved for he had great possessions". Now grief. Grief is a killer. Grief, particularly when you hadn't lost anything yet. Depression is grieving over stuff you hadn't lost. It's a mean thing, depression is. Grief is a sense of loss. He didn't.. That, that's fine. He was sad that, well, it's not fun, but, but, but he, he was, he's still all right. He's grieved, he's still all right. But he didn't have to go away.

Now, I had a news media person say this to me in challenging me over wealth and stuff, and she quoted that to me. It's easier for a camel to go through the eye of a needle than for a rich man to enter into the Kingdom of God. And I said you need to read the rest of that. Jesus said. Now look, how hard is it for them that trust in Riches, not that he's rich. A trust in the riches. That's what this man was doing and it cost him. I think now you know that there's just between you and me and God, but I think it cost him apostleship, at that time, tradition says it was Barnabas.

Now, I haven't studied it deeply enough to be able to really confirm that. I believe it was. Amen. Then He said it's easier for a camel to go through the eye of a needle then for a rich man to enter into the Kingdom of God, and these real poor guy's said, yeah I know that true. They were astonished out of measure saying among themselves who then can be saved. Jesus looking up on them saith.

Now I want to. Yeah, I'm not, I'm not through with that. Every man on His staff was wealthy. Every one of them. It's a little shaky how Matthew got His but, but anyway, anyway... He's a wealthy guy, man. Glory to God. Oh, you know, I mean, he's a tax collector and there's, you know, the little... but that all stopped didn't it? Praise God! Thank you, Lord. "Jesus, looking upon them sayeth, 'With men. It is impossible, but with God, with God, all things are possible.'" With men, it is impossible, with God all things are possible. Who are you with? I'm with God. All things are possible to you. All things are just as possible with you and with me as they all with God, when we're with God! Hallelujah. Come on, give the Lord a praise shout! Hallelujah.

There's a lot of shouting in this room tonight.. Thank you Jesus. Thank you, Lord. With men, it is impossible, but not with God. For with God, all things are possible. "Then Peter began to say unto him, 'Lo, we have left all and followed thee,' "Jesus answered and said, 'Verily. I say unto you, there is no man, no person that has left house or brethren or sisters or father or mother or wife or children, or lands for my sake and the gospels, but he shall receive a hundred fold now in this time," houses, brethren, sisters, mothers, children, not wives. "'And lands with persecutions.'"

Of course the persecutions are coming, Of course they are. Put a smile on your rich face. Cause it's coming. I can't tell you how much I don't care. But now listen, you came in, kidding around about it. People are not the problem. We don't wrestle with flesh and blood. We wrestle with demons. Devils. The devil is just as real as God. That's where the comparison ends. He is no good, and he is what... he's the one that causes people to make bad choices. Amen. I love people, I hate the devil with a passion. He shall receive a hundred-fold now. Say now. Now. Now. You cannot say now a while ago. Every time you say now it upgrades. Every time you say now it catches up. Now. Now. There is therefore now no condemnation to those who are in Christ Jesus. Now.

The first time we said now is gone. Now. He shall receive a hundred-fold now in this time... Or in his lifetime, houses, brethren, sisters, mothers, children, lands. "'With persecution and in the world come eternal life. But many that are first shall be last and the last first.'" Praise God. You know what that is? That is your true lifetime Jesus' care program. I mean when Gloria and I were Oral Roberts University, and I've, I tried to explain it, but you need to get the sense of this. Gloria would go in the supermarket and pray in tongues that she would not have to take anything back at the checkout counter. Because we had so little money. And never did have to.

So that, that was the condition. And I saw that the blessing of Abraham has come on Gloria and me. Well, I wonder what that means. See, I was scripturally illiterate. I hadn't read this book. And I believed it, but I hadn't read it. Now I got that from my mom and dad, mother read it and daddy believed it. Whatever, whatever Veneta said that it said its said and he believed every word of it. And later, I mean, he was 60 something years old he decided he was going to start reading the Bible and, and he said, "Kenneth, this is wonderful". Oh God. I don't say he never read it, of course. But he didn't study it and he was like the man in the book of James. He read it and loved it, but not with the idea of acting on it and so forth. But then after that, both got filled with the Holy Spirit.

And after I began to teach the Word of faith and the Lord told my mother, she, he said, you receive him as your minister and not just your son and things will change. So anyway, Glory to God. I came home from school one day and I said, "Gloria, I read over there where God made Abraham Rich, rich, rich, rich, rich, rich, rich, rich, rich, rich," And then Isaac. Oh, Oh. You read, it said he became wealthy and wealthier and and very wealthy indeed. And he became so rich, the king got mad at him because, and study this from, from Jewish literature like Komash and so forth. And, and you find out that that where he lived was, was more palatial than the, than the palace of the king. And he was very jealous of it.

Anyway, I thought, now wait a minute, the blessing of Abraham through Jesus, will come on me. Whoa. Yeah. That's what it says. and Abraham. Um, uh, you know rich, I finally got it out. Rich. That's a Bible word. It's a big bible word. Both in the old and the new covenant. The poverty doctrine is not in the Bible. Now there are things in there that you can, that you can draw that from it, but not from the entire work. It's not there. It's been built there. Not by people, but by the devil trying to keep the money out of the hands of the church. Anyway, I'm telling you, I've got excited about that, I could hardly wait to get home. I got home, and I sat Gloria down there and I read her those scriptures and I said, Gloria, we're rich now this ain't nothing but a matter of time, girl! We just got shouting happy!

Gloria said she believed it and we've been believing it it ever since and he's made us rich. He's made us rich. You don't like rich preacher preachers, you better get out of here right now. Amen, glory to God. Hallelujah. There's rich preachers, all up and down these rows. Glory to God. All that in there. there ain't no telling. and this one. Oh my goodness. You mean to tell me you're independently wealthy? No, I'm dependently wealthy. Well now my own personal networth, it ain't all that much.

It's good. Don't misunderstand me. In in, in comparison, yeah. Our home, all the, the land, the Gas wells, all of that belongs to ministry. Doesn't belong to us personally and I forget that the world, you know, doesn't know that and they think that I own the whole thing. No, I just work there. I've got a good job. Gloria and I both do. Amen. It's wonderful. Hallelujah.

We are, we serve a loving God who does not want, I can prove it to you from the book of Deuteronomy where the scripture said, and particularly if you read it in the new living and the new loving, that's a good title. The new living testament and the amplified, classic amplified testament. God is referring to his covenant people. He said, "There should be no poor among you". God's provided for everyone to have far more than enough. Every human being far more than enough. his lack of knowledge and tradition and makes your Word of God no effect, manmade doctrines that which is the devil stealing and killing and destroying and wonderful people. I'm talking about Godly good people laboring under that, hurting. and course then the devil's going to get them out with us because they think because of our money, we're going to hell. I'll tell you what, will send you to hell. Not Money, but the love of it.