Kenneth Copeland - The Process For Releasing Your Faith 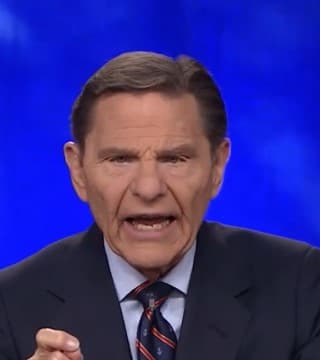 Open your Bibles to Mark Chapter 11 Verse 22 uh, we finally got here. Glory to God, faith and how it is released. This is part of the fundamentals of, of faith series and a series of teachings that I've been doing for quite some time now. But the Lord was very specific about my going to this tonight and for a few minutes Mark chapter 11 and so simple and so profound. Chapter 11, verse 22, Jesus, answering saith unto them have faith in God or the cross reference, have the faith of God. For verily, I say unto you that whosoever shall say unto this mountain, be thou removed and be thou cast into the sea and shall not doubt in his heart, but shall believe that.

Here's what you believe. Believe that those things believe that those words, which he said shall come to pass, he will have whatsoever he saith, therefore, I say you notice that he laid out the spiritual law and then he immediately used it. You see it. Therefore, see if he hadn't said therefore it would have just been part of it, but therefore because of what I just said, I say unto you, what things Soever you desire. When you pray, believe that you received them and you shall have them.

When you pray, start believing then. Right then while you're praying, not after you see it, not after you feel it, not for any other reason except the Word of God. Hallelujah. This is the way faith works and it's the faith of God. Believe that you received them and you shall have them. You shall have what you say and you shall have what you believe. When you stand praying forgive. When? Right then if you ought against any that your father also, which is in heaven, may forgive you your trespasses.

Now, then Second Corinthians chapter four, let's look at the 13th verse. We having the same spirit of faith according at his as it is written, I believed and therefore have I spoken. We also believe and therefore we speak. Now the 16th verse for which cause we faint not, but though our outward man perish, yet that inward man is renewed day by day. That inward man is what Jesus called the heart. You can't believe God with your blood pump no more than you could your liver or anything else. He's talking about the inward man, the real you. Amen. What Peter called the hidden man of the heart.

Now then let's go to Mark chapter 5:25. Faith and how it is released and a certain woman which had an issue of blood 12 years had suffered many things of many physicians, spent all that she had was nothing bettered but rather grew worse. When she had heard of Jesus, came in and pressed behind and touched his garment for she said, if I may touch his clothes, I shall be whole. And straightway the fountain of her blood was dried up and she felt in her body that she was healed of that plague. Jesus immediately knowing in himself that virtue or dunamis, power had gone out of him, turned him about in the press and said, who touched my clothes? His disciples said unto him, seest thou the multitude thronging thee, and sayest thou, Who touched me? He looked around about to see her that had done this thing. The woman fearing and trembling, knowing what was done in her came and fell down before him and told him all the truth and he said unto her, Daughter, thy faith, your faith has made thee whole. Go in peace, be whole of thy plague.

Now we know it was the anointing. He said, the Spirit of the Lord is upon me for he has anointed me. How God anointed Jesus with the Holy Ghost and power. What power? Dunamis. Dunamis healing power, we get our word dynamite from that same power, explosive power, unusual power. Think about when dynamite was first invented, what an awesome thing. Well, terrible seeming thing that that was an exciting thing at the same time. That's this same word. Dunamis. Power, Spiritual, Holy Ghost healing power. Now, we know from Acts 10:38 that it was that anointing, but Jesus didn't refer to his anointing. Not one time. Not once throughout the New Testament nor the book of Acts did he say my anointing has made you whole. Not one time. He never did say, and it's never said by any of the apostles in the book of Acts. Our anointing has made you whole. No, it isn't in there.

He said, Kenneth, Why do you think he was expecting to receive something. He said, every time we walked through there, I instructed Judas to give him money. Judas is a treasure. He got something every time he came by. Well this is Peter and John. Oh yeah, they tip big. Amen they don't leave Gospel tracks they tip big. Amen. Oh, that blesses me. I can see it, Paul, it's my guys again. Now actually if you study that closely, it leaves the idea and the impression Peter didn't say, silver and gold have I none. Now there's two very distinct explanations for that. One, It leaves the idea, I don't have it on me right now. The other is they wound up at the end of that ministry with it all sown.

Now, I believe it's a very distinct combination of the two because he's got to have something after all Peter's wealthy man. They never did go poor. Not the whole three and a half years. Never. Do you think they wore the same clothes for three and a half years? No. Jesus just told them I'm going to supply them. It said, don't bring anything you're working for me now boys, and this whole idea that Jesus is poor, well you can get rid of Judas because poor man don't need a treasurer. I mean, what is there to do? And the bag was so big, nobody but Jesus knew he was stealing. Hallelujah.

If you keep digging, you keep digging deeper. You can get a few little gold dust on top, but you start digging, you hit the mother load. Then you have one nugget right after another and they're not this big they're this big, amen, Hallelujah. Glory to God and I get around the crowd like you and it just downloads. He said, silver and g old have I none but such as I have give thy thee in the name of Jesus. He didn't say, and he didn't preach that it was Jesus' anointing that healed the man. He didn't say it's because I'm an apostle. He knew he was an apostle. John knew he was an apostle, they never mentioned that. And when they were called on account for it, they said it's the name, it's faith in the name that made this man strong.

And you don't have to be an apostle to have faith in the mighty name of Jesus. Glory to God, hallelujah, glory to God. Thank you Lord Jesus. Faith and how it is released. Now let's back up and look at Jairus, 22nd verse, behold there come with one of the rulers of the synagogue Jairus by name, and when he saw him he fell at his feet. Yes, sir, I think I'll do that. I want to point out that the woman said it and then she did it. How is it released? Through the mouth from the heart through the mouth and corresponding actions. That's the way it works.

What if she kept saying it and faith got strong. What if she said, look at me I'm just skin and bones. I'm bleeding now. I know if I could get to the hem of his garment and if I could just touch that, I know good and well I'll be whole. There's no question about it. I've heard that they're bringing me the messages that he's preaching right down the street here at the synagogue. I know they're telling me the miracle about the man that had the withered hand and Jesus has told him to stretch it out and he did and it was healed like the other one.

I know my little old deal compared to that. There's no question in my mind, but I can't get out there. It's against the law for me to be out there, she would've died right there in that room with faith and more than faith enough to get it done. Jairus, look here cometh one of the rulers of the synagogue, Jairus by name. When he saw him, he fell at his feet. Besought him greatly saying, my little daughter lies at the point of death. I pray, come and lay thy hands on her that she may be healed and she shall live.

That's the last thing he said. He had all kinds of opportunity. We won't go through them all, but he had all kinds of opportunities to say something else. They came up and said, your little daughter's dead. He never said a word. Jesus just turned his head to stop the fears, she will be made whole. Believe only she will be made whole. Every time Jesus said that faith came. Faith came. He already made his faith statement. He stayed with it until Jesus did just exactly what he said. He used his words and said daughter, listen He could have just said rise and live. I say unto you rise. Usually words as a tool of power. What did he do? Took his hand caught her hand and lifted her up. That was the corresponding action that Jairus had said. Put your hand on her. That's a good amen spot right there. Hallelujah. Say it with your mouth corresponding action. According to James 2:14-17.