Kenneth Copeland - We Are Partakers of the Anointing 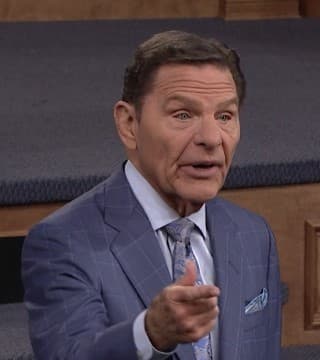 Then Samuel took a vial of oil and poured it upon his beard and shawl. And kissed him and said, Is it not because the Lord Hath anointed thee to be captain over his inheritance. When Thou are departed from me today, then thou shalt find two men by Rachel's sepulchre in the border of Benjamin at Zelzah. And they will say unto thee the donkeys which thou wentest to seek are found: and lo thy father, hath left the care of the donkeys and sorroweth for you saying, what shall I do for my son? Then shalt thou go on forward from there and now shall come to the plain of Tabor and there shall meet the three men going up to God, to Bethel one carrying three kids and another carrying three loaves of bread and another carrying a bottle of wine and they will salute thee, and give the two loaves of bread which thou shalt receive of their hands. After that they shall come to the hill of God, where is the garrison of the Philistines: And it shall come to pass when thou art come thither to the city, that thou shalt meet a company of prophets coming down from the high place with with psaltery, and a tabret, and pipe, and harp, before them and they shall prophesy. And the Spirit of the Lord shall come upon thee and thou shalt prophesy with them, and they shall be turned into another man.
1 Samuel 10:1-6

Now this is extremely important. I checked this out with our dear Brother Rick Renner and oh my, he's an apostle of God to the former Soviet Union first man to build a new church building in Moscow in centuries, I guess. Then he built a second one. Now, you need to pray for Mr Putin and thank God for him every day. Every day the Gospel is being preached there. When they dedicated the good news church, the first one and the second one, he sent people from his administration over and they read scripture and they prayed and they rejoiced because of the dedication of this new church. Glory to God, he had the great favor there. Amen. Now Glory to God. And the anointing is being preached. The Word of faith is being preached throughout Moscow and other former Soviet Union nations.

I'll talk to you a little more about that later, but now this, when that happened here at Philipi, you're, you know the story, the jailor got saved. I checked this out with Rick and, and there, there is absolute evidence of it in the historical record, he became the pastor of the church. The prisoners became the first members of this church. This is a convict church and it grew from there. Hallelujah. Now this is very important because you're going to see something about the anointing here, Paul and Timothy, servants of Jesus Christ, the anointed to all the saints in Christ Jesus, which were at Philippi with the bishops and deacons. Grace be unto you and peace from God, our father and from the Lord Jesus Christ. I thank my God upon every remembrance of you, always in every prayer of mine, for you all making request with joy.

Now, joy is in this little book nineteen times, and he was in trouble when he wrote it for your fellowship. Exactly the same Word in Luke 5:7 translated partner. For your partnership in the Gospel. What's the Gospel. Whoa. Redeemed from that curse. Now, this opens up vistas of information. You remember when he and and Barnabas went Lystra and there they preach the Gospel, and the man and Paul perceived that the man had faith to be healed. He shouted, stand up on your feet, and the man jumped up walked. What'd he preach? Well, he preached the Gospel? Now we know exactly what he preached. Because we already know what he wrote in Galatians 3. He preached redeemed from the curse. That's the Gospel. Just a sliver, a lot of tidbits.

Now we know he preached redeemed from the curse. Come on. And Philip went down to Samaria and what did he preach? Christ. Well, now we know exactly what he preached. He preached how God anointed Jesus Christ. With the Holy Ghost and power. What about healing all that were oppressed of the devil. That's what Peter preached. Because that's what they heard Jesus preach. Being confident of this very thing that he which hath begun a good work in you will perform it until the day of Jesus, the anointed one, even as it is meet or even as it is, right for me to think this of you all because I have you in my heart in as much as both in my bonds, and most of these men that were hearing this letter read were in jail with him.

They were in there that night when that thing shook and it only had it only quaked in that one spot. The earthquake did not tear the jail down. Earthquakes don't cause you're handcuffs to fall off. Who did that? The Lord of hosts. I cant prove it. The Angel walked, now in this amazing, Peter's going to get killed in the morning and the man was so sound asleep that angel had to kick him to wake him up. He really scared him. You know why he didn't care. He's like my Spiritual father, oral Roberts. He called me one day and said Kenneth and he, he was irritated. In fact, he's bordering on being mad at somebody.

Back there then they had the, they had just the technology for stents in arteries had had just come out and, but it had at at a 20 year or less life span. And so they wanted to replace it with a permanent one. And he said, and he told me that story and he said, do you know what they told me? I said, no sir I don't. He said, Kenneth, they told me Oral at your age, just take the medicine and relax, it's dangerous. You don't want to take the risk. Oral Robert's not taking a risk. They said, but you might die. He said, yes. And on the other side of that it's stunning. And then he just laughed out loud. Glory to God. He said, they ain't ready to kill me yet. Hallelujah. Well I just don't understand Brother Copeland somebody who brought healing to all those people, and just laid hands on 2 million people and he had to have a stent put in his, I just don't get it.

Well, healing is not a reward you have to believe for it, stand for it, and he's tired. He don't believe for it and stand for it. Put the stent in there. Let's go back to work. Let's get back to business here. It's right for me to think this of you all because I have you in my heart in as much as both in my bonds and in the defense and the confirmation of the Gospel. You all are partakers of my grace. You all are partakers of my anointing. We're in this together.

Hold your place there and go to the book of Ephesians. Chapter four verse 10 or nine now he that descended, what is it but that he also descended first into the lower parts of the earth. He that'd descended did you when he went down in the hell and paid the price for all is the same also that ascended far up far above all the heavens that he might fulfill all things, and he gave some apostles, some profits, some evangelists, some pastors and teachers. For what? For the perfecting of the saints, for the work of the ministry and for the building up of the body of Christ. Till we all come. All do. Till we all come. And the unity of the faith, not doctrine, the unity of the faith and of the knowledge of the Son of God unto a mature, full grown man under the measure of the stature of the fullness of Christ.

Now Watch it. Watch it. Watch it. Watch it. Speaking the truth. Oh, excuse me. Henceforth be no more children tossed to and fro. Carried about with every wind of doctrine by the sleight of men, cunning craftiness whereby they lie in, wait to the deceive. That just what we were talking about there are a few moments ago, but speaking the truth in love may grow up into him and all things which is the head, even the anointed one from whom the whole body fitly joined together but is held together by that which every joint supplies according to the effectual working in the measure of every part making increase in the body edifying itself in love. Every joining. Amen, every joining.

Now, let me give you an example of what I'm talking about. Oral Roberts, my Spiritual father, Kenneth Hagin is, right there. He fathered the Word of faith in Gloria and me and God did this purposely as a plan as we studied under these two Spiritual giants, God joined Gloria and me in ministry, friendship and Brotherhood with both of them. That brought both their anointings to bear in this ministry. Are you seeing the concept here? This is the way the anointing works.