Kenneth Copeland - Use Your Faith to Receive Healing from Jesus 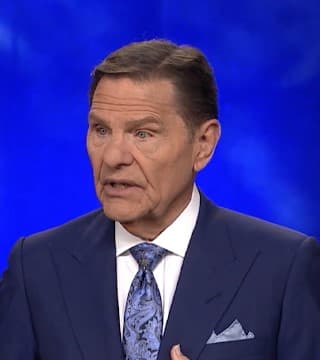 KENNETH: Let's go to Matthew chapter eight. "Jesus saith unto him, 'I will come and heal him.'" Now then, I want us to go through some things here concerning receiving from Jesus. Let's look. Oh, I just want to do it all. I will read this quickly from Matthew, chapter four. You can turn there if you want to, but we are going to look at the 13th verse. "Leaving Nazareth, he came and dwelt in Capernaum". I wanted to give you absolute scriptural foundation for this. He moved. He never did set up his headquarters in Nazareth. There's too much on belief there. They ran him out of town.

That's not the reason he moved to Capernaum. He moved to Capernaum, which is on the sea coast and the borders of Zebulon and Nephilim that it might be fulfilled, which was spoken by Isaiah the prophet. That's the only reason he did anything. He found himself in the book of Isaiah. We saw yesterday from the fourth chapter, he said he opened up the book to the 61st chapter of Isaiah and he said the Spirit of the Lord was upon him. And you'll notice references to him in the book of Isaiah. "In that day, his burden shall be removed and then be destroyed because of the anointing," then it says, "And the stem that comes out of Jesse". Amen, Isaiah is a primary prophet. He's in every book of the Bible, but Isaiah is a primary prophet concerning the messiah. Jesus found himself there.

GLORIA: He found himself in the book.

KENNETH: Yeah. And somebody will say, "Well, Brother Copeland, he always knew". No, he didn't always know. He came as a man. He had to learn. Now, he started learning really early. He knew more by the time he was 12 than I'll ever know, until quite some time from now.

KENNETH: Yeah, much later. But he was limited as every other man is limited to what is in the book. He had to go there and find it. He had to be led by the Spirit of God. He didn't have this memorized. Are you listening to me now? He had to learn. He had to grow in wisdom. He had to grow in stature. Praise God. He's just as much the son of God...

GLORIA: It also says he could there do no mighty work because of their unbelief.

KENNETH: Because they're unbelieving. He's been bound up.

GLORIA: You want Jesus to move, we've got to have faith!

KENNETH: Hang on to this, will you?

GLORIA: Pardon me, I got carried away.

KENNETH: Thank you, Lord. Now, chapter five, book of Mark. "They came over onto the other side of the sea," other side of the Galilee. Now, the area of the Gadarenes is directly straight across the Galilee from Capernaum. You can see it across there. It's not very far. It's not a sea. It's a lake. It's quite a nice-sized lake, big lake. But you can see over there. "When he was come out of the ship, immediately they met him out of the tombs, a man with an unclean spirit," only one unclean spirit. This is a ruler of the darkness of this world, from Ephesians chapter six. "Who had his dwelling among the tombs. No man could bind him. No, not with chains, because that he had been often bound with fetters and chains and the chains had been plucked asunder by him and the fetters broken in pieces".

GLORIA: In other words, he broke the chains.

KENNETH: So, that demon empowered him. I don't think this man was very big at all. He didn't sleep. He was a cutter. He bled a lot. I expect he's skin and bones, and so it would look like to everybody else, well, just chain him up. Look at the guy, he's nearly dead now. That demon would come on him. That demon did on him what the Spirit of God did on Samson. I don't think Samson was all that big a man. Because had he been, they'd have been more frightened of him. And you know, all they had to do is cut his hair and he was a weak man. I don't think he was very big. I don't think he was a great big guy. It had a deceiving effect on the people that saw this man, because he's just emaciated. He'd probably have been a sizable man, when he was healthy, because these kind of things don't just come instantly.

Now, he had an unclean spirit. "He dwelt among the tombs. No man could bind him. No, not with chains, because he had been often bound with fetters and chains and the chains had been plucked asunder by him and the fetters broken in pieces. Neither could any man tame him. Always night and day, he didn't sleep". That's the reason people in the area thought he was supernatural. Well, it was being done supernaturally, but of course they didn't understand anything like this. He was in the mountains and in the tombs crying and cutting himself with stones. He was a cutter.

GLORIA: What you have to remember about the Devil is he's a liar. And anything he tells you is not going to be the truth. Amen.

GLORIA: I've been together with this man a long time.

Now, there was there nigh under the mountains, a great herd of swine feeding. The devils besought him saying, 'Send us into the swine that we may enter into them.' And forthwith, Jesus gave them leave and the unclean spirits went out and entered into the swine and the herd ran violently down a steep place into the sea," where it was about 2000 and there were choked in the sea. "They that fed the swine fled and told it in the city and in the country and they went out to see what had been done there. And they come to Jesus and see him that was possessed with the devil and had the legion sitting and clothed and in his right mind," and they were afraid. They didn't understand any of this. This place was controlled by fear.

Now, there is such a thing that's called in the demon world, it's a witchcraft term, a human chalice. It is human beings that do their best, I've seen this do their best, to get all the devils they can to come in. Now, a controller will use that human chalice. A witch controller or a warlock controller will use that human chalice. In one of our meetings many years ago out there at Will Rogers, John was just a young boy, about nine years old. Oh, I'm telling you, the place had gotten into such turmoil. It was so upsetting in there. Of course, at the time, I didn't know what it was. I knew there was a devil. I didn't know the process.

There was a woman sitting right behind her chalice and she was using her, channeling that woman and that service was in chaos. There was a thunderstorm that came up right over the building because a friend of mine that was flying in there for the meeting and he was late getting there and approach control and told him he said, and the airport's just a little ways from there. And he said, "We've got a single thunderstorm there that's just right over the airport and you may be a while before you can land". The Spirit of God came on me and I just, oh man, it was just attacking the spirit, and I took authority over that thing in the name of Jesus and broke its power.

Now, people that were sitting around those people watching her do this, I mean. I'm talking about 95% of the people in there were believers. This was part of our what turned later to be Super Sunday meetings. Like this meeting, mostly believers. So it was very obvious to people what was going on there. And this one person told me, said, "When you did that, that woman said, 'Come back, come back, come back.'"

GLORIA: When you cast it out?

KENNETH: When I cast it out, I broke its power. It quit. And she's trying to get him back. That place settled down. That woman jumped up to run. Ran out, I'm talking about the handler, that little old girl. She didn't know what was going on. She was kind of a zombie. I believe she was delivered. I never had any evidence of that. That woman stormed out of there. John had just come out of the men's room. She flat ran over him, just ran slap over him and he said something like, "That crazy woman run plumb over me". Well, yeah, she's getting out of there fast as she could. She's losing everything she got. My friend called me. He said, "Kenneth, I knew when it happened, something was going on". He said, "I made the turn to head over to Meacham and suddenly, the thunderstorm was not there. It didn't drift away. It just disappeared". That's what happened out here that day. Amen.

Now, listen. I'm headed for something that is huge here today. Verse 18: "When he was come into the ship, he that had been possessed with the devil prayed him that he might be with him. How be it Jesus suffered him not but sayeth unto him, 'Go home to your friends. Tell them how great things the Lord hath done for the and has had compassion on thee.' He departed and began to publish and accomplish how great things Jesus had done for him and all men did marvel". Now here's the point of this. Here's a man possessed with a ruler. Now, this was not after the cross. But of course, Jesus was there. It's three to 6.000 demons in him and around him. Stand still. Oh, thou healing preacher. For those listening on CDs, Gloria is standing right next to me. If there had been any man ever that the devil could have stopped him from falling at Jesus' feet and worshiping, it would have been this man. Couldn't stop him. You know he tried. The man just fell on his face in his presence. Here's what the Spirit of God wanted you to see for today. Jesus healed him and delivered him that quick. Demons and all had to go.