Kenneth Copeland - The Curse Was Never God's Will For You 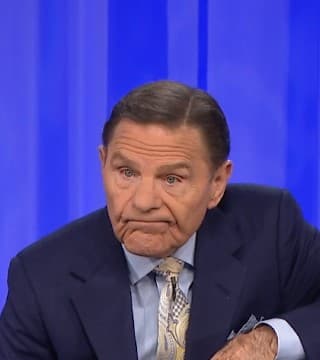 We're talking about what we read in Galatians 3:13-14, "Christ has redeemed us from the curse of the law, being made a curse for us, for it is written 'Cursed is everyone that hangeth on the tree.' That the blessing of Abraham might come upon the Gentiles in Christ Jesus, that we might receive the promise, or what the Spirit promised through faith". So there's the curse, the blessing and the promise.

Yesterday we began talking about that curse. Now that moved us over onto the creation day. Because there was no curse until Adam sinned and fell and the curse came, the earth was cursed. Now, we're talking about in creating a man and the fact that when He created him, the King James English Bible says, "Let us make man in our image". But actually the text actually says instead of, "Let there be light". "Light be, light was". All right, 26th verse, let's read that seventh verse of the second chapter again, "The Lord God formed man of the dust of the ground, and breathed into his nostrils the breath of life". He Spirited into his nostrils the Spirit of life and man became a living soul.

Now, here is where this took place. I saw this, as I said yesterday, I saw this in a vision and I saw God holding this colorless lifeless perfect human body, but it was just hanging there. He held him by the shoulders. He was exactly the same size as the Father and the Son. Glory to God. Now, He's holding him and said... remember now, let's stay with God's original MO here. "And God said, 'Let us make man in our image'," now, you see the let us, that's the clue. "Man be in our image, after our likeness. Have dominion over the fish of the sea and over the foul of the air, and over the cattle, and over all the earth and every creeping thing that creepeth upon the earth".

So, God created man in His own image. Glory to God. Now, He finished saying that, and here was this living, breathing, perfect, exact image of Jesus man. Glory to God. But he hasn't heard a Word. He didn't hear any of that. No, that created him. Now there was nobody else making any noise. There was not an angel saying anything. Amen. Hey, would you been talking while something like this is going on, the angel doesn't even know what this thing is He's making. He said, "What is a man? What is that, that you visit him"? I mean, God's made something that looks just like himself. Well, anyway.

Now, once that blessing got in this earth you can't get it out. I don't care how big a devil you are. You can't get that out. No more than you can get the Holy Ghost out of here. Don't you know the devil tried everything he could to stop the Spirit of God from coming? That's ludicrous to think you could stop the Spirit of God. Well, it's just as ludicrous to think you could defeat God in the first place. That's the answer to the age old question. How dumb can you get?

Now, I mean that goes beyond dumb, man. I mean, come one. I wanted to take the time to build this and just stamp this indelibly on our hearts and minds. Glory to God. That God's idea was to bless and not to curse. Amen. And once you get this blessing in here there's no way to get it out. Now you know why those angels were shouting and just went absolutely, completely wild out there in front of those shepherds. Amen. There's born a Savior in Bethlehem. You can't get him out, the war is over. Good will. Don't misread those verses. That angel didn't say, "Good will among men". No, he said, "Good will toward man". The war's over. That baby's born and you can't get him out of here. You can't defeat him. Glory to God. The, hey, hey, hey. The blessing's back. Yeah. Glory to God. That don't set you on fire your woods wet.

So, here Adam was created with words of authority, and dominion. Now, God invested that authority over this entire planet and all the works of His hands to man, mankind. When he was tested instead of using that authority he yielded. He could have said, "Now, the by the scripture says the woman was deceived but the man was not". I could go into all the reason why, not because the woman was inferior to him. There are reasons for it. One thing was she was not there when Adam was created. She didn't hear that.

Now, I always thought that Adam was off doing garden work when she did that and he came in and said, "What have you done"? Nope. I'm sorry guys it didn't happen like that. No, no. This is what happened, the devil talked to her and she turned and gave to him and he ate. Right then is when he should have exercised his authority. At the first sign, at the first sign there's something wrong here. He knew exactly what he'd been doing. He knew it wasn't right. Not one guess about it. This man had the same kind, not just the same kind but the very same intelligence of God. He knew exactly what was going on here. He should have said, "Hey, no. Baby put that down. Put it down right now". Just slapped it out of her hand. "Put that down. No, we ain't eating that. We're not eating that. You get".

Boy it would have ended right there. I'll tell you something else. God, and this is God's way. This is the way He is and this is what He does. He gave him an opportunity to repent. He always does. Gave him an exact opportunity and he blamed it on his wife. Instead of just falling on his face and saying, "Sir, I should have stopped it. I'm sorry I didn't. I wish I had. I knew it wasn't right. Forgive me please". It would have changed everything. But he didn't do it. Men, and women, have been doing the same dumb thing thousands, and thousands, and thousands, and thousands of years. He always giving everybody the opportunity to repent, and most of the time all He gets is a, "Yeah, but". "Yeah, but you don't understand". Yes He does. Yes, He does. Amen. Yeah, He does. Oh, glory to God. Thank you Lord Jesus.

So, we establish here, and looking at this whole scenario very carefully we've established first of all the will of God. We've established the will of God for the human being. God did not create man of sickness. He did not create man for poverty. He created a garden and put the man in it. Amen. You missed a real opportunity to shout right there. I mean, come on. Amen. He's still trying to get you to receive your garden. Glory to God. Because man, and if we had time I can prove this to you from the scripture. The scripture says, "The blessing of Abraham is the Eden blessing".

So, actually Adam's job description could be this: he was to, by faith in God, begin to spread that garden. From that place, until and to have babies and babies and more babies and more babies and lots of babies, and lots and lots and lots of babies. Until the earth was the garden spot of the universe. Hallelujah. Then we had this whole... Multiply 90, 90, 90 nano trillions of stars and... to go from here. Do you ever wonder why man's got such an itch to get off this planet? It was born in him. It was born in him. Adam didn't last long enough for it to take hold of him. But its been in this every since. Praise God. I mean, you know, man just finally got to where he could just fly an airplane about the length of this building.

Next thing he going to do is go to the moon. I mean, what do you want to go to Mars for? I mean, we're doing real good here man. You know, what's the deal here? It's in him. It's in him. That urge to populate the rest of this. That was in man from the very, very beginning. If you're a student of the Bible you'll realize that it's all in there. Praise God. So, this curse was actually executing judgment.

Now what is judgment? Until the final judgment all judgment in this earth is a function of seed, time and harvest. 'Cause what you sow is what's going to come on you. Amen. Let me say that again. Judgment is a function of you reap what you sow. Now, all judgment's not bad. It's just that you say judgment most people say, "Oh, no". God judged Jesus. He raised from the dead and went before the Holy Father to be judged. You know what? We get his judgment. Oh, yes. It's good. I mean it's G-O-O-D, good. Praise God. Amen. If you learn to walking in the blessings, instead of the curse.