Kenneth Copeland - The Curse Is Death, The Blessing Is Life 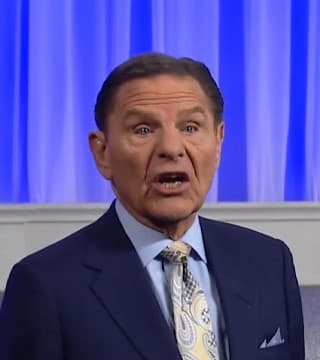 Let's read once again our golden text from Galatians chapter 3 for this week's study. In Galatians chapter 3, "Christ hath redeemed us from the curse of the law, being made a curse for us: for it is written, Cursed is every one that hangeth on a tree: so that the blessing of Abraham might come on the Gentiles through Jesus Christ; that we might receive the promise of the Spirit through faith," or that we might receive what the Spirit promised through faith. Amen. Now, this word faith comes in, and we're going to be dealing with that.

Now, then, we talked about the curse of the law, and that curse came into this earth when Adam committed high treason. He had the authority to do what he did, but he didn't have the moral right to do it. He did it on his own decision. His wife was deceived. The Scripture said he was not. He understood exactly what was going on, and he should've stopped it because he had the authority over everything that moved, everything that fly, everything that flew, every animal, every spirit. Amen. He had absolute authority over Satan, but he didn't do it. He didn't use it. He didn't use the very power that God had given him, so that curse came.

Now, we talked about every sickness, every disease. In fact, the curse is three-fold, spiritual death. Now, what is spiritual death? Well, God told Adam, "The day you eat of that tree, you'll die," and he did. His body didn't fall down dead, but the reason his body died later was because his spirit died on that day. He became a spiritually dead man. His spirit no longer had the nature of God in it. It had the nature of a lawbreaker and a liar in his spirit. The spirit being, the real you, the real man, the human being is a spirit. We were created in God's class. We're spirit beings.

Now, the dead man, the dead woman, this spirit being... Let's take Adam, when he was created, he had faith, and he is like God. Now, doctor, you correct me on this if I'm coming... Got a stretch going here, but I'm pretty sure I'm not. God has faith, but he is love. God doesn't have love. He is love, so was Adam. Love created him. In his own likeness, he looked like him. In his own image, he was like him. Amen. Now, that meant he had faith. That meant he had hope. That meant he had love, born after love himself. God is love, but then God uses his love. His love then becomes a spiritual force. Amen?

Now, spiritual forces are far more powerful than natural physical forces. He was the very righteousness of God. He was just as righteous as God before he sinned. There was no such thing as unrighteousness in a human being. Satan had already committed it, but he's doomed. He wasn't a human. There's no redemption for him. He's on angelic level. He's not on man's level. Amen. What happened to Adam's faith? 180 degrees. Wait, why are we going this way? Faith became fear. Faith cometh by hearing and hearing by the Word of God, but when God said, "Adam," instead of faith coming, fear ran. Do you see it? He's no longer the righteousness of God.

The only prayer he has is if he will be obedient to God and be accounted to him as righteousness because he's not righteous anymore, and nobody is going to be until Jesus went to that cross, went to hell and paid the price, seated at the right hand of the Father on high and righteousness came upon all men. In other words, it was available for anybody that would take it. Thank you, Lord Jesus. That'll do something for you, brother. You want me to tell you what that does? Make a somebody out of nobody. Yeah, but here's what I want you to see. I want you to see that instantaneous change from light to darkness, righteousness to unrighteousness. You can see it.

Paul wrote to the church at Corinth. He said, "What communion has light with darkness"? Calling the believer light, and the unbeliever darkness. Amen. He goes there and make that whole list of stuff there, the new birth. Oh, glory to God. Now, this is what I want you to see. That curse came, and the human spirit died, absolutely died. Now, people get the idea that, well, you pick up a dictionary and you read the definition of death, and it says something like the absence of life. That's deep, ain't it? I mean, I could've come up with that myself. I didn't need the dictionary to help me with that, but that's not spiritual death. No, spiritual death is just simply being separated from God.

Now, think about it like this, God and Adam were one. He and his wife were one, connected, in the spirit, connected, connected with God. The moment he did what he did, got unplugged, but you can't stay unplugged. A human spirit, the most powerful spirit being other than God himself, created in God's class, now has the nature of the devil in him. That makes him the meanest thing. The devil is mean, but he doesn't have the power to execute meanness like a human being does. There ain't nothing as mean as a mean human. Are you listening to me?

When the moment you mention prosperity people think about money. That's a part of it, but actually, it's the lowest part of it. True prosperity is the God-given ability by faith to receive every need met abundantly, spirit, soul, body, financially, and socially, glory to God, the whole spectrum of human existence. Whoa, glory be to God. Amen? Are we getting somewhere this week? Glory. Glory be to God. Now then, we're talking about in executing judgment, now we saw in Malachi where God say, "Hey, I rebuke the devourer for your sake. I rebuke the destroyer". Amen.

Let's come on over into the New Testament. Let's see what happened to the curse there. Let's go over to the Book of Acts, and it just settles it forever and ever and ever. Verse 34, "Peter opened his mouth, and said, Of a truth I perceive that God is no respecter of persons: But in every nation he that feareth him, and worketh righteousness, is accepted with him. The Word which God sent unto the children of Israel, preaching peace by Jesus Christ: he is Lord of all," in other words, the word that Jesus preached the whole time he was here is, "That word, I say, ye know, which was published throughout all Judaea, and began from Galilee, after the baptism which John preached; How God anointed Jesus of Nazareth with the Holy Ghost and with power: who went about doing good".

Now, what was the good he went about doing? Teaching and preaching. Matthew 9, teaching, preaching, and healing. Healing who? All, healing all that were oppressed by the devil for God was with him. God had anointed him. It was the devil oppressing people. Those people were oppressed of the devil, not God. God didn't make anybody sick. Jesus never healed anybody that God made sick because God never made anybody sick. Come on. Come on. What do you say? Amen would work. Glory to God.

Now, let's go to the 13th chapter of Luke's gospel. You do remember that out of the mouth of two or three witnesses let every word be established. I'm giving you a whole lot more than that. 13th chapter of Luke's gospel, and let's look at the 11th verse, "Behold, there was a woman which had a spirit of infirmity eighteen years," so now, there's a spirit involved in this, all right, "and was bowed together, and could in no wise lift up herself. When Jesus saw her, he called her to him, and said unto her, Woman, thou art loosed from thine infirmity. And he laid his hands on her: and immediately she was made straight, and glorified God. "The ruler of the synagogue answered with indignation, because that Jesus had healed on the sabbath day, and said unto the people, There are six days in which men ought to work: in them therefore come and be healed, and not on the sabbath day".

Listen to what he said. He didn't major on the curse. He said, "Ought not this woman be loose seeing she's a daughter of Abraham? This woman is blessed. She ought not to have this. Blessings ought to be on her. She ought to be manifesting the blessing, not the curse". She said, "Come here, woman, thou art loosed from thine infirmity," and then he laid his hands on her. What happened to the devil? Out. Out. She got in touch with the blessing. It is hers all the time. It was hers all the time. The woman with the issue of blood. 12 years, that curse, that plague, Jesus call it. 12 years, the blessing was hers the whole time, the whole time.

Isn't this something? She was not hearing anything about the blessing until she heard of Jesus. We know she heard what she preached because faith came. We know it was the Word. She didn't just get a little hearsay. She heard the Word. She heard the Word of forgiveness because faith doesn't work in an unforgiving heart. She forgave all those doctors and whomever else that had given her a bad time all this time for 12 years, gone completely broke, lost a lot of friends, probably. Boy, her life had changed, praise God. She finally said, "I've had enough of this. If I can just touch the hem of his garment, I just touch his clothes, I'm out of here, brother". Why? The blessing is walking down the street, and I'm going to have it. It's mind, and I'm going to get up in that road and get it. It belongs to you. It belongs to you, and it belongs to me. It's time to shout in this church. Yes.