Kenneth Copeland - The Cross Is the Place of Exchange 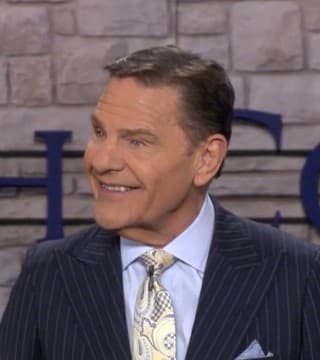 Now this was an offering being received to go to Jerusalem. And this they did. Not as we hoped but first gave their own selves to the Lord and unto us by the will of God. In as much, in so much that we desired Titus that he had begun, so he would also finish in you the same grace also or the same gift. Therefore, as you abound in everything in faith, you notice thing in is in italics. Therefore as you abound in every faith and utterance and knowledge and in all diligence and in your love to us, a love for the ministry, see that you abound in this grace also. Now, I speak not by commandment or I'm not ordering you to do this but by occasion of the forwardness of others and to prove the sincerity of your love. For you know the grace of our Lord Jesus Christ that though He was rich, yet for your sakes He became poor, that you through His poverty might be rich.

This entire passage has been overlooked, misunderstood, particularly that ninth verse. For you know the grace of our Lord Jesus Christ that though He was rich, yet for your sakes He became poor, that you through His poverty might be rich. Now, the general idea of all religious people, all of them, is that Jesus was rich when He was in Heaven but then when he came to Earth, He was poor and had no place to lay His head. Well compared to what He had in Heaven, anything on this planet is dirt poor, you understand? But that is not what this is referring to. He was not poor in His earthly ministry.

Let me remind you again, Judas was treasurer. Poor people don't need a treasurer. Well, Brother Copeland, He told His people that they couldn't even buy clothes. Do you think they wore the same shoes and same shirt for three and a half years? No they didn't. But they didn't buy their clothes with their own resources, they worked for Him. They were dressing better than they were before. And there wasn't a one of those men poor when he went to work for Jesus. Glory to God.

The time being referred to here is the time when He bore our poverty. Poverty was laid on Him. The curse, threefold, spiritual death, sickness and poverty. At that moment, think a moment, He bore our poverty. Let's look at it from the standpoint of righteousness. He was made to be sin. He never sinned. He was made to be sin with our sin. He bore our sins in His own body on the tree. That we being dead to sin should live under righteousness and by those stripes we were healed.

Now, you and I, we, never, ever committed any righteousness. No, He never committed any sin. And I want to ask you a question, when you and I accepted Jesus as our Lord and Savior and we became new creatures in Christ Jesus and we were made the righteousness of God in Him, are we just as righteous as He is? Now don't get this confused with holiness. Righteousness is just simply being right with God. Right standing with Him. Things are right with Him. Amen. Well, it's His righteousness. In Him we're as righteous as He is. And when we break fellowship, what do we do? Immediately, we confess that sin and we by faith receive our forgiveness from that sin and He promised and He is faithful and righteous to cleanse us. Not only forgive us but cleanse us of all unrighteousness. If you're cleansed of all unrighteousness, what's left? Righteousness, right? Amen. If He bore our poverty, then He became poorer than anybody. He bore poverty itself. The wickedness of it.

Now poor people are, there's wicked poor people and there's good poor people, amen but nobody ought to be poor. Amen. God speaking to Israel in the 15th of Deuteronomy, in the fourth verse, particularly from the New Living translation, God said, "There should be no poor among you". Why? He's provided the blessing. He's provided what it takes. He's given us the opportunity and the right to tithe. Come on, that'll break it right there. Amen. Praise God. Now remember it's actually the law of transfer. Yeah, thank you Lord. Think about it. The cross is a place of exchange. Amen. He became poverty so that through His poverty we could become just as rich as He is. We haven't scratched the surface on what God has in store. He's able to do exceeding, abundantly beyond what we ask or think according to the power that worketh within us.

I've had a lot of wonderful things happen but there's not anything out there I can't think. I'm available Lord. Oh Lord. Yeah, I want out there, don't you? I want out there, glory to God. I want to press this envelope and my sowing and my reaping, glory to God. Now, this area here, I want you to notice that He said in verse 14, but an equality that now at this time your abundance may be a supply for their want that their abundance also may be a supply for your want that there may be equality. That is not socialism. The government had nothing to do with this. There is a sowing and reaping exchange. I want to remind you.

Let's go back over there. Right there at the very beginning. Right at the very beginning, verse 4. Praying us with much intrigue that we would receive the gift, their gift, what they want to give. Why? Why? Why do you suppose they had to put pressure on the apostle to give? They were in deep poverty. Are you listening? They were in deep poverty. They were in the midst of a tragic situation. It was rough but they had so much joy but it wasn't the joy, it was the grace of God. What was it said in the amplified in the New Living? Arousing in them the desire to give. Most people, all religious people, have no concept of a poor man giving. This grace, this grace.

Now, you remember just forget about the word chapter and the number nine. He comes right on down from touching, ministering to the saints, you talk about this offering and comes down here but this I say, now remember wait a minute, wait a minute. That you abound in this grace. One, one grace. Come on over. This I say he would soweth sparingly shall reap also sparingly, he would soweth bountifully should reap also bountifully. Every man, every person according as he purposes in his heart.

Do you see that over here in the eighth chapter that's what they did? And like I said, it'd do you good to read that in translated, they gave what they had. And they gave themselves. In other words, they gave their time. They're were really involved in this thing. So let him give not grudgingly, nor of necessity for God loveth a cheerful giver and God is able to make all grace abound towards you. That you always having all sufficiency in all things may abound to every good work. Glory to God. Now, where did this situation happen? It happened in Macedonia. That's where and that's where you remember in the Book of Philippians He was riding to the church at Macedonia? That was a convict church.

Do you remember Paul and Silas in the dungeon in that bridge? They had been beaten just short of being beaten to death and they were praising God. Praying, praising and singing at midnight and everybody in there heard them. The power of God hit that place. Amen. That jailer became the pastor of the church in Philippi which is in Macedonia. Come on. Very interesting, wouldn't you say? Praise God. This is the profile of a sowing, tithing, New Testament believer. As it doth, hey look, He's able to make all grace abound toward you. He's able to do it.

Now it's what you and I do with our faith that makes the difference. That you always having all sufficiency in all things. I looked up that word sufficiency today right here in this text. It means a state of life, having enough that you need no outside aid or support. That's being sufficient. Yeah, thank you Lord. You remember when the Apostle Paul approached God about the thorn in the flesh a messenger of Satan sent to buffet him and he said three different times, he went to the Lord and asked Him to get him off. And he said, "My grace is sufficient". He didn't tell him he had to keep it. He said, "With my grace you don't need any outside aid or support. Use what I've taught you. Use the revelation that I've taught you". Hallelujah.

What was that revelation? That we have authority over Satan and we've been given complete and total authority over him and out of the life of the Apostle Paul, we learn more about Satan and his operation than in any place else in the entire Bible. Particularly from the Book of Ephesians. Grace is sufficient. Why it's through grace that he learned his authority that he had over him. And later on he said, "I've been delivered from all of these things". Praise God.

Now, he did have to disperse abroad he'd given to the poor. His righteousness remaineth forever. Now he that ministers seed to the sower, both minister bread for your food. He didn't say bread for the hungry. Bread. This is sufficiency. You can have bread when nobody else has any. You can have so much that you can be feeding other people and they come to you and say, "Where'd you get this"? You say, "Well you know, my God supplies all my needs. His name is Jesus and I need to talk to you about Him for a moment". Amen. Thank you Lord Jesus.

Now he that ministers seed to the sower. He ministers seed to the sower. They needed seed to sow. I've been to that place where I absolutely did not have any, zero money to sow and I made a lifelong decision, I would never allow an offering to get by me, I'm going to put something in there if I have to cut a button off my shirt or something. There's something going in that offering plate 'cause I'm bleeding for seed and I've seen it over and over and over and over again. In some of the poorest places in this country. Both minister bread for your food and multiply your seed sown and increase the fruits of your righteousness, being enriched in everything to all bountifulness which causes through us thanksgiving to God. Hallelujah.