Kenneth Copeland - The Blessing Will Open Opportunities For You 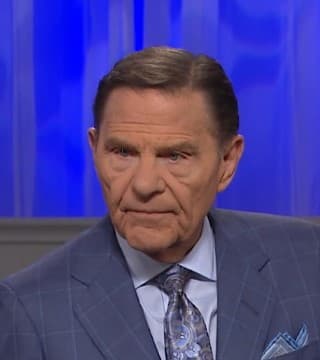 Father, we thank You, and we praise You. We open our ears. We open our hearts and minds. Flood our hearts with light according to Your Word in the first chapter of the book of Ephesians, where You said in Your Word that You have blessed us with all spiritual blessings in heavenly places. The very blessing of the LORD. And we thank You for it and we praise You for it. In Jesus' name, amen.

Let's go to chapter 37. Thank You, Lord. The blessing is just working all the way through this. Let's go down to verse 11. "His brethren envied him, but his father observed the saying," or he wondered about what the dream meant. "And his brethren went to feed their flock in Shechem. Israel said unto Joseph, 'Do not thy brethren feed the flock in Shechem? Come, and I will send thee unto them.' And he said to him, 'Here am I.' And he said, 'Go, I pray thee, see whether it be well with my brethren and well with the flocks. And bring me word again.'"

Now remember, he's only 17 years old. "So he sent him out of the vale of Hebron and he came to Shechem. And a certain man found him. He was wandering in the field and the man asked him saying, 'What seekesth thou?' And he said, 'I seek my brethren. Tell me, I pray thee, where they feed their flocks.' And the man said, 'They are departed here. I heard them say, "Let's go to Dothan".' And Joseph went after his brethren and found them in Dothan". That's the blessing of the LORD. That's the blessing of the LORD. He didn't know where he was. He's lost out there. He's just a pampered 17-year-old kid that's never had to work a day in his life, and he gotten out there, and he's lost. And God had this man right there. He had the man that just happened to hear that they were going to Dothan. Tell me what's happening here. Whoa. Hallelujah. Come on, Hallelujah. Hallelujah. Glory to God forevermore.

Now in verse 20, "'Come now, therefore, and let us slay him.'" When they saw him after all they came and just conspired against him to slay him. "And they said to one another, 'Behold, this dreamer cometh. Come now, therefore, and let us slay him.'" We're going to kill him. Cast him into a cistern. "'And we will say, "Some evil beast has destroyed him. And we shall see what will become of his dreams".' Reuben heard it and he delivered him out of their hands and said, 'Let's not kill him.' Reuben said unto them, 'Shed no blood but cast him into this pit that is in the wilderness. Lay no hand upon him,' that it might rid him out of their hands to deliver him to his father again. And it came to pass, when Joseph was come unto his brethren they stript Joseph out of his coat, his coat of many colors that was on him. They took him and cast him into the pit," into the cistern. "The pit was empty, there was no water in it. They sat down to eat bread. They lifted up their eyes and looked, and behold, a company of Ishmeelites came from Gilead with their camels".

Well, just happened to be there on that day, on that road. Yeah, right. "With their camels bearing spicery and balm and myrrh, going to carry it down to Egypt. Judah said unto his brethren, 'What profit is it if we slay our brother and conceal his blood? Come, let us sell him to the Ishmeelites, and let not our hand be upon him, for he is our brother and our flesh.' And his brothers were content," or they agreed to that. Now I want you to read this carefully now. "There passed by Midianite merchantmen. They drew and lifted up Joseph out of the pit and sold Joseph". They didn't even get to sell him. That's a good thing. That's a good thing. But see, the blessing working for Joseph, curse is working for them. And their plan just didn't work. But actually it was a blessing of the LORD, because at least they didn't have that on their conscience.

That's one of the things I wanted you to see. "There passed the Midianite merchantmen, and they drew and lifted up Joseph out of the pit and sold Joseph to the Ishmeelites for 20 pieces of silver. And they brought Joseph into Egypt. Reuben returned unto the pit, and behold, Joseph was not in the pit, and he rent his clothes. And returned unto his brethren and said, "The child is not". Notice they called him a child. And that's what he was. He was just a little boy. Just a 17-year-old spoiled kid. Praise God. "Joseph rent his clothes, put sackloth upon his loins. Mourned for his son many days". I want you to notice he did not inquire of the LORD. He just believed what the devil said. He should have, but he didn't. Anyway. Thank You, Lord. Show me which way to go with that, Lord.

Yes, back to Proverbs 10:22. "The blessing of the LORD, it maketh rich. And He addeth no sorrow with it". Now then, turn to the 127th Psalm. I use this every day. "Except the LORD build the house, they labor in vain that build it. Except the LORD keep the city, the watchmen waketh but in vain. It is vain for you to rise up early and sit up late to eat the bread of sorrows. For so He giveth His beloved sleep". Amen. He giveth His beloved sleep. David, would you bring me my phone right quick, please? Thank you, sir.

Now hang on a second. And we go to Psalm 127. To eat the bread of sorrows. Pain, hurt, toil, labor, hardship. And down again, toil and hardship. Toil, toiling. That is in the number one translation of that word. Now let's look at the New Living. "It is useless for you to work so hard from early morning until late at night anxiously working for food to eat. For God gives rest to those He loves". Let the blessing do the work. "It is vain that you rise up early and go late to rest eating the bread of anxious toil. For He gives His beloved sleep". The CSB. "In vain you get up early and stay up late, working hard to have enough food. Yes, He gives sleep to the ones He loves". Man, that's an eye opener, isn't it? We work hard, because the Bible says, you don't work, you don't eat. But we don't work for a living.

And remember this from Ephesians 4. "Let him that stole, steal no more. But let him work with his hands that which is good in order to have to give to him that needs". We work for seed, we work on assignment. Amen. I was watching, it was so many years ago I don't remember just exactly how the interview came about. But it was on a street kind of a thing. And this interviewer was interviewing this young African-American young man. And he looked like maybe in his maybe young 20's or something like that. And what he said just hit me. He said, "Ain't nobody going to give me no job". That's right. He don't know what a job is. Now what is that? That comes from the plantation mentality, because nobody had ever taught him the difference. Nobody going to give you a job. That's plantation talk. "Hey boy, pile that wood over there. And when you get through I got another job I'm going to give you". You just go do what you're told to do, and get your whooping and go to bed. A job solves a problem for somebody. Amen.

"Well, I ain't going to work for no minimum wage neither". Well, you may miss the biggest opportunity of your life. "I won't flip no burger". God may want that Burger King to belong to you. And you go in there with the blessing of the LORD. Oh, let me tell you a story. Bud Eigelhart. Bud was just a kid out in California. And he wanted in aviation so bad. And he went out to the airport to get him a job. And so he asked the guy. "No, I got plenty of people. I don't need nobody". And he said, "What if I worked for nothing"? "Oh, what kind of shifty deal is that"? "Well, I want to learn. I want to be around mechanics. And could I work for nothing"? "Yeah. And I ain't going to pay you nothing".

So he got in there and went to work. And he would sweep, he'd do whatever necessary. He just did whatever was there. And he's watching mechanics. And they're actually apprenticing him. And they're showing him. And he worked there for a couple of years. And went into the boss and said, "I've been doing this now for a couple of years or so. Can I get paid"? "No, I told you when you came in I wasn't giving you no pay". "Well, can I have a uniform"? "No, you can't have no uniform". So he just went on with what he was doing, and just kept working. He's just smiling. He's just being there. He's just doing what was in front of him to do. And those mechanics, "Hey, this kid worked hard. He was there on time every day. He worked hard". And man, they taught him. And they were training this young man. So after three years he went in there and he said, and of course the answer was the same.

So he said, "Well, I'm going to have to quit and go get a job because," he said, "I can't work for nothing". "I know it. Go on, get out of here". So he went out and told the mechanics he's going to have to leave. So they all got together and went into the boss and they said, "You pay Bud or we're all leaving". "What"? See what happened? He became so valuable that the man couldn't do without him. Bud Eigelhart eventually came to Kenneth Copeland Ministries, and was one of the finest mechanics we ever had. Bud was so full of the Holy Ghost. And there was a day, he flat saved my life one day. He just couldn't let it go. He just absolutely couldn't let it go. "There's something wrong with this airplane. There's something wrong with this airplane".

Let me tell you something, sister, that's top drawer. But you see what happened to the little guy that would work for nothing. "Minimum wage, are you kidding? That's zero wages". And it was the blessing of the LORD. It was the blessing of the LORD on him. Just a kid full of God looking for a place to work, and the Spirit of God. If that's not Joseph's story, I never heard it. Because that's about how old he was at that time. He was probably 19. He was out of high school. He was probably 19, maybe 20. Same deal. Isn't that outstanding? Don't ever forget that story. Because it's so valuable and so absolute truth. "He that doeth truth will come to the light that his deeds are wrought in God". Say amen, somebody. Glory to God. How much time we got? Sir? Thank you. Now then, this opens our eyes. The time we got? Sir? Thank you.