Kenneth Copeland - The Blessing Is The Victory 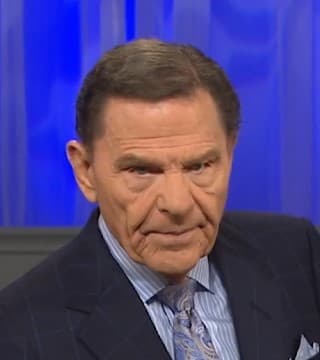 Father, we thank you today. Oh, we are so excited about what you have given us all this week here at KCBC and we are thrilled with it, Lord Jesus. And we, again, we sir are yours to command and we thank you for the ministries that are developing and growing up here in this Bible college. We are so grateful to you for the honor of teaching and the honor of your calling us and entrusting into our hands people upon which the calling of God has come. We thank you for it in Jesus name, amen.

Let me tell, go to kcm.org/notes and get the notes of these broadcasts because we're gonna be talking about some things... we talked about things yesterday that not many of you heard before so get the notes. By the time this goes on the air, they'll all be ready for you and you'll already have them and you can follow that outline, all the scriptures, anything the Spirit of God said, it will all be there. You'll be glad you did. You can teach your Sunday School class from it, glory to God. Amen. Be like back when I first heard Brother Hagin. You listen to something day and night, it's gonna come out pretty well the same way as the way you heard it. I mean, I preached on just close to word-to-word as I could get. I didn't try to change it.

Are you kidding me? I stupid. Try to put my name on it. I wasn't smart enough to come up with that, and I didn't have any right to put my name on it. Except we were at a full-gospel business men's convention, and his table was right here, and my table was right here, and here's my tapes, and here's his tapes. He and I were both out there between services and he looked over here, he said, "Kenneth, son". He said, "At least you can change the titles". I said, "No, sir. That's the name of it". Amen. Thank you, Lord Jesus. We thank you, Father.

All right, Proverbs 10:22, our golden text for this study. "The blessing of the Lord". Now, as I shared with you yesterday, I strongly suggest you do the same. Now, had I be copying this I would have said the blessing in all caps. Any form, I suggest this to you, that any form in which you use the word bless, capitalize it to renew your mind. This is not a blessing, it's the blessing. It is God. It is the glory of God. It is the Spirit of God himself, hallelujah. Well, then, that means it's Jesus himself, right? Glory. Let's go back over here where we were yesterday in the book of Genesis, in the very beginnings, the MO of God. We brought out the fact yesterday at which I found it among Jewish writings in a small Synagogue in Wichita Falls, Texas was we were using that for our morning services and the Rabbi was so kind. Just a very, very kind man. Of course, this is 52 years ago. Well, a little over 51 years ago. He said, "Kenneth, anything. Just read anything you want to". Woo. I found where God said, he didn't say let there be light. He said, "Light be. Light was".

Now, once you know God's MO, his Method of Operation, he never changes. That one little adjustment changes the complexion of this. Verse 26, Genesis 1:26, "God said, 'Let us make.'" No. Now yesterday I shared with you that the Lord allowed me through a vision to see this. I saw Him holding Adam's gray, lifeless body. And in the second chapter we see it in the seventh verse, "The Lord God formed man of the dust of the ground," or out of the ground, "And breathed into his nostrils the breath of life," the Spirit of life, "And man became a living soul". A living, speaking Spirit, like God, the Humosh says. Now, then, He's holding this gray, lifeless body. It was very, very pressing to me because you just stop and think about it, it had to be so. He was exactly the same size.

Now, remember this, what is right in that verse is let us. The Spirit of God, the one that does the works, moving on the face of the deep doing his job. Nothing's happening yet because God hasn't said anything yet. "Light be, light was". That's when the Spirit who does the work, the Father that does the work. Man, at the speed of light and it is still expanding at the speed of light. It's being upheld by the Word of His power. Yes. Hallelujah. "The blessing of the Lord, it maketh rich, and He adds no sorrow, toiling with it". Now, we're going to get to that, but I wanted to re-inject this right here because the blessing of the Lord, what is that? Huh? Hey, come on. Jesus said, "My words I speak unto you, not my own, it's the Father that dwells within". He does the work. He's the blessing. Amen.

All right, now, when God said He's holding this man like He's right in his face. I mean, He's just holding him like this, and I saw Him right in his face, these words, and the breath of His Words. I strongly, strongly hold to what Jesus did in John's gospel after He had been raised from the dead, and He breathed on them and said, "Receive the Holy Ghost". That wasn't a baptism of the Holy Ghost, they were just now born again. Hey, they believe He's Lord. The believe He's been raised from the dead. All they needed was just a moment just to breathe in and woo. Then, they went to Jerusalem, that's when they got baptized in the Holy Ghost. Are you flowing with me? I know you are.

Now, then, "Man be in our image, after our likeness... have dominion over the fish of the sea... the fowl of the air... the cattle, over all the earth and every creeping thing that creepeth upon the earth". And he became a living, speaking, Spirit like God and a living soul. He's a Spirit, he has a soul, and he now lives in a vibrant, living body. He is in the exact image of God. He's not one peep less than God. He is as exact like God, exactly like God as Jesus is exactly like God. Amen. Thank you, Lord. He hadn't heard a sound yet. Then, like I said yesterday, there sure wasn't anything making any sound. Uh-huh, no, the Almighty God, He's the one been doing the talking here. Adam hadn't said a word. This is extremely important, the first thing that Adam, the first sound to strike a human eardrum, "Be fruitful, multiply, replenish the earth, subdue it. Have dominion over the fish of the sea, the fowl of the air, and every living thing that moves upon the face of the earth". That's the first sound any human ever heard was the blessing of the Lord.

Now, once he had been spoken to a man there's no way, do you understand? No way to get it out of the earth. This is what Satan is fighting all these years. He had no defense against it. Abram whipped him with it, Abraham whipped him with it. Hallelujah. I tell you what, this is shouting stuff, isn't it? Feel free. You know, I'll tell you one thing, this is one school you can actually shout in class. Chewing gum, no. Shout, yes. Glory to God. Thank you, Lord. Now, then, so you always stay with God's method of operation. God said, "Light be," light was.

Chapter 9, "God blessed," capital B-L-E-S-S-E-D, "Noah and his sons, and said unto them, Be fruitful, and multiply, and replenish the earth. And the fear of you and the dread of you shall be upon every beast of the earth, upon every fowl of the air, upon all that moves on the earth, upon the fishes of the sea; into your hands they are delivered". There's not two blessings. God had to start over again. The gene pool had been so severely fowled that it had to be wiped out. Amen. Here's Noah and his sons, same blessing. It's exactly the same one. There's not two, there's not three, there's one. One. The weeniest one. One, one, one. That's the big thing about this message. This book is the blessing of the Lord.

Why did this book have to be written? How did Lucifer get away with what he got away with? No other angel is ever going to be allowed to do that. It indicates, it indicates that there probably will. But the very thought enters his little peanut brain, there will be a hook slammed in his jaw and he's done. When Lucifer did it, there was no law against it. This is the law book and it's written in heaven and earth. My daddy, and your daddy, and my big brother, and your big brother is the judge. Yeah. Yeah.

Now, verse 18, "The sons of Noah: Shem, Ham, and Japheth". Now, Ham and Japheth did the same thing with the blessing that Adam did with it, they sluthed it off. Not Shem. Shem, I learned this from studying the Humosh and other Jewish history and so forth. Shem, now, he heard that, didn't he? He watched it work. They watched it, literally, replenish the earth. They saw the earth with nothing in it. Shem became Melchizedek. Now you know how. Now you know. Glory to God. Verse 17 of the 14th chapter. This is after the slaughter of the kings, old Ched got the slats kicked out of him. Chedorlaomer. Amen. Try saying that all at one time.

All right, now, I will add something to this. Three hundred eighteen men plus Abram defeated this three expeditionary forces far to their superior except for one thing, the blessing of the Lord. You know what the motto of the United States Army? They own the night. Find out what happened. You know what they did? Verse 15, "He divided himself against them, he and his servants, by night, and smote them, and pursued them". Those people never fought at night, you can't see at night, they don't fight at night. But you can when the glory's on you. Now I want to know, I want to know who general Abram called in to train his troops. The blessing, the blessing taught him. The blessing trained him and they owned the night and they defeated these armies, slaughtered them the scripture says. That means they didn't lose a man. Glory to God. Thank you, Lord.

Tim, where am I? Tim, how much time I got? Woo, okay. "Melchizedek, king of Salem brought forth bread, wine". What does that indicate? Covenant. Covenant. Covenant because he is about to say something. "The priest of the most high God" "See, Melchizedek is a title, it means lord mayor, it wasn't your name. "And blessed him, and said, Blessed be Abram of the most high God". Now listen, "Blessed be Abram covenant partner of the most high God, possessor of heaven and earth: Be blessed by and most blessed be the most high God which has delivered thine into thy hand. And he gave him tithes of all". He did not call God possessor of heaven and earth. He said, "You are in covenant with God and you are possessor of heaven earth. I can prove it. I can prove it from the fourth chapter of the book of Romans. He became heir of the world by faith and that's when he took... we're out of time.