Kenneth Copeland - The Blessing Is Blood-Backed 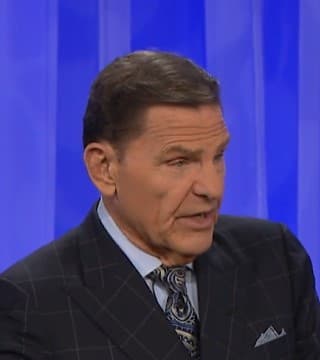 All right, now, thank you Lord. Oh, there's so much here that the blessing of the Lord, the blessing of the Lord redeemed from the curse, being redeemed from spiritual death, sickness and poverty. That's wonderful. But we're not just redeemed out of something. We're redeemed into something. Glory to God. Go with me to the book of Colossians please. Colossians chapter 1:12 giving thanks under the Father, which has made us able to be partakers of the inheritance or the promise of the saints in light who have, that's past tense. Who has already delivered us from the power or the Greek word is authority, delivered us from the authority of darkness.

Let me put it like this, who delivered us from the authority of the curse. The curse delivered us from the power and the authority of the devil. The author of the curse, but that's not it. That's not all of it. And, oh glory to God and have translated us into the Kingdom of his dear son, glory to God. That's what happened to you and me. Now he did that. That was absolutely accomplished, ratified when Jesus was raised from the dead and stood before God, our born again resurrected man. Hallelujah. Then seated at the right hand of Majesty of God. Now when you and I accept that Jesus as our Lord and savior, that happened. It had already been ratified, already an absolute in heaven. When you accepted Jesus Christ as Lord of your life. I mean you're not just a forgiven sinner. No. The scripture says, any man in Christ is a new creature, old things passed away, behold, all things become new and all things are of God and he who knew no sin was made to be sin for us, that we might be made the righteousness of God in him. Thank you Lord Jesus.

All that happened because we've been redeemed from the curse, thank you Lord. Jesus, you accepted your redemption and that mightiest of all miracles took place and you your very self, you the real you, not your body, not your intellect, you. Amen. We're recreated. Born from above, born again, not of corruptible seed, but incorruptible by the Word of God, which lives and abides forever. So now notice and look at it again. I mean this is just who had delivered us from the power of darkness. He has delivered us from the power of the curse and has translated us into the Kingdom of his dear son in whom we have redemption through his blood, redemption, what's that mean in whom we have redemption? Redeem from what? Say it again, the curse, which is everything mad, I don't care if it's bad it is under that curse, if it's good, it's in the redemption.

Hey man, they're nowhere and there is no place that Jesus and the devil swap sides, or the devil blessing somebody and Jesus cursing them, no, no, no, no, no, no, no. So the curse judgment until we get to the final judgment and this thing and and so forth. I won't go into all of that, but judgment is a function of reaping what you sow. And again, I mentioned this last week, but you think that a minute, 99 out of 100 people and you say, I mean whether they're Christians or not, you mentioned judgment. Well, it's bad. Oh, judgment is coming on America. Oh, you mean it hadn't already, what do you think 9/11 was? But we're still here. You know, would you like me to tell you why? Because there was untold numbers of people fell on their faces before God and repented. If my people are called by my name, didn't say anything about the whole nation. If my people call by my name, will humble themselves, turn from their wicked ways, I will hear from heaven. I will heal the land. Hallelujah. Come on, come on. Come on. Come on. Come on. Glory to God, Glory to God.

And when I see the Lord doing with us and what he's attempting to do with the body of Christ is get us over here on the positive side. Get them on the God side of everything. I wrote it right in the first page in my Bible, stay on the God side of everything. Amen. To realize and understand that it is not God's will to judge and destroy. Now, judgment both good and bad is a function of reaping what you sow. And if you have any sense at all, you keep just one hand on repentance all the time. Oh quick to forgive. Slow to anger. Amen, and quick to repent. I may just repent right now, don't let it get 10 seconds. So just stop and say, wait a minute now I told you, I just know. I said, I'd done that a thousand times. I really didn't. I did it three. So will you forgive me for just lying to you?

Well, Brother Copeland now wait a minute, he just being picky. Oh yeah. Because we're in training. Amen. If you'll deal with the little stuff like that and you train yourself to speak the truth to one another in love all the time about everything. And when you do, when the big stuff comes along, you won't lie. Didn't get much of a big amen now that, but we've been redeemed from all that. Hallelujah. Praise you Lord Jesus. All right now then, let's talk about the blessing. Last week, let's do it again this week.

Let's go to the book of Genesis. And God said, man, be in our image. Verse 26 after our likeness. And remember, I told you, the Lord allowed me to see that in a vision and really, oh, it's just so clear to me that when you see from the second chapter that the Lord formed man out of the dust of the ground and breathed into his nostrils, or he spirited into his nostril, the Spirit of life and man became a living soul. And I saw that the Lord allowed me to see that, that he had made his body out of dirt and formed it and it was just lifeless hanging there. And he had him by the soul shoulders, and he was speaking life to him, man be in our image after our likeness, have dominion over the fish of the sea, the fowl of the air, the cattle over all the earth and every creeping thing that creepeth upon the earth.

So God created man in his own image, in his image, he created him. So as the Spirit life went in to that physical body, amen. This human being exactly like God. And then he blessed them and said, fruitful be, multiply, replenish the earth, subdue it. Have dominion over the fish of the sea, the fowl of the air, and over every living thing that moveth upon the earth. Complete and total dominion and blessing in every realm of life. And that's the first thing that human ear ever heard. Now the blessing was in the earth. That's the blessing of the Lord. And it was introduced into the earth. And I don't care how many devils tried to get it out. They can't do it. No demon has the authority to remove that blessing. Now you've not walk in it, but you can't get rid of it. Oh, glory to God.

All right, now then let's go over to Genesis nine. Now everybody knows the story. We're starting over again here. And God blessed Noah and his sons and said unto them, be fruitful, multiply, replenish the earth, that sound familiar? Amen. The fear of you and the dread of you shall be upon every beast of the earth and upon every fowl of the air and upon all that moveth upon the earth. And upon all the fish in the sea, into your hand, they are delivered, little bit different set of words, but exactly the same blessing of the Lord. It's the same blessing. Now then let's get into the blessing of Abraham. Now, the sons of Noah, Ham, Sham and Japheth, now Ham and Japheth did the same thing with that blessing that Adam did with it that Sham did not. He stayed with God. Amen.

Now I'm going to show you something here as we go further into this, Genesis chapter 12. Now the Lord had said unto Abraham, get thee out of that country and from that kindred and from thy father's house into a land that I will show you, I will make of thee a great nation. I will bless thee and make their name great, and thou shalt be a blessing. I will bless them that bless thee and curse them that curse thee and in thee shall all families of the earth be blessed. Amen.

All right, let's go now to the 14th chapter and go down to the 17th verse and he had to deliver Lot and so forth. Verse 17, the King of Sodom went out to meet him after his return from the slaughter of Chedorlaomer, Chedorlaomer and of the kings that were with him at the Valley of Shaveh, which is the Kingsdale and Melchizedek, Melchizedek that was Shem. Amen. And you can find it in Jewish records of Jewish history, he stayed with it. Now, Melchizedek is a title. It means Lord Mayor, high priest and authority of sailor. So he came, brought forth bread and wine covenant elements. Now folks, come on, get in here with me now, covenant, covenant. I'm going to just drop this on in and then move on. Adam, after he really was just lost and just full of fear and shame at what he had done and tried to make clothes of fig leaves.

Can you, come on, don't you know? Can you imagine how ridiculous that must have looked of a fig leaf suit from somebody that never sewn anything in his life. Amen. So what happened? God made a covenant with him to meet his needs. Killed an animal. Covenant came on the scene. This has been God's way of getting back what Satan stole is blood, the shedding of blood, and he made him some proper clothes. Now, hey, if you had a fur suit made by God, you probably pretty good look it. Of course, you ain't nothing like you had been a few days before, because you were clothed from the inside out. They had never seen they're naked body. They were closed with the glory just like God. And you couldn't see the physical body because he crowned him with the clothes and that's what made it so startling, the light went out.

Well compared to that glory, just this physical natural body, I mean, even though he's physically perfectly proportioned, it's a first time he ever saw that, he had been used to be clothed with the glory of God and he saw this naked body and to him it was ugly and to her it was ugly and they tried to cover it up and then God moved in. Oh, glory be to God. Glory be to God. Don't ever, ever underestimate the power of covenant. That's the first covenant and the second covenant. Every word in this book, every promise in this book is a blood sworn oath and sworn in the blood of animals as a type and reference and then sworn in the blood of Jesus and when Jesus said, seek ye first the Kingdom of God and his righteousness and all these things will be added to you. That's blood backed. That's blood backed. Glory to God.