Kenneth Copeland - The Anointing Is What Makes You Rich 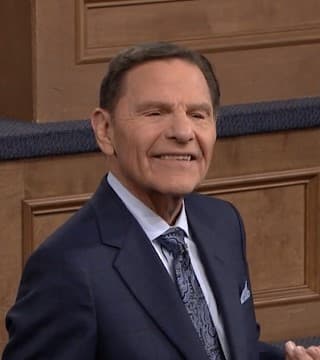 Let's open our bibles to Luke, the fifth chapter please. "And it came to pass, that as the people were pressed upon Him to hear the Word of God. He stood by the Lake of Gennesaret, That, that's the Sea of Galilee. "And He saw two ships standing by the lake, but the fishermen were gone out of them and were washing their nets". Plural. Are you seeing that now? They're washing their nets. This has been so misunderstood over the years. and, and this, this is going to teach us something tonight in Heaven's economics. And this ties right in then as we go into this evening's messaging and you'll see it.

"And He entered into one of the ships which was Simon's and prayed him that He would thrust out a little from the land and He sat down and taught the people out of the ship. Now when He had left speaking, He said under Simon, 'Launch out into the deep and let down your nets.'" They were washing their nets. This a key thing here. Pay, really, really, really careful attention. "Simon answering, said unto Him," Master or rabbi, "'We have toiled all the night and have taken nothing. Nevertheless, at thy word, I will let down the net".

Now the first thing He did, well I won't get into it, not yet anyway, I, I'll comment on it later. "When they had this done, they enclosed a great multitude of fish and their net broke. They beckoned their partners, which were in the other ship that they should come and help them, and they came and filled both ships so that they began to sink". Only one net broke. "When Simon Peter saw it, he fell down at Jesus' knees. He couldn't fall down to His feet. He's knee deep and fish and he didn't catch a one of them. "Depart from me. I am a sinful man".

Now listen, he knew better than that. He had seen Jesus just the day before, do miracles in his house and heal his wife of a deadly fever. "Well, yeah, but you don't know anything about fishing, God". No. He just created it. Every fish in the Galilee was it up around those boats. All of them. What fish is going to say? "Ah, no. Jesus. Not Today". No, no. All of them. All the fish in the Galilee were there. They could have emptied the lake if they had enough nets. Then Jesus, standing there smiling. He knew what he'd done. And He's laughing at him. Amen. Peter wasn't laughing. It hurt him. He's a Jew. He knows better. He knows better than to bring a, a bad sacrifice. A blemished animal.

What's the difference in a blemished animal and a blemished old rotten net? That's been laying around. He doesn't wanna have to rewash all those nets. That's hard work. Well, we go out there and throw this one around a few times. You come back in and say, well, you know, Jesus, that's just the way it is in the daytime on this lake, you know. Now he was never so disobedient again. Because Jesus told him to do something absolutely impossible. He came home, he said, "Uh, Boss, they want to know if we're supposed to pay taxes". He said, "Get your fishing pole". Then didn't say a thing in the world about bait. Just a hook. He said "okay". Right down that lake he went. Boy he won't miss it again. Amen. And Jesus said this is big now. "Take the first fish, not a fish". First fish. Get the money out of his mouth. "First" indicates, Don't quit fishing just because you got excited about a fish with money in it's mouth. Fill the boat up again, boy. I mean. Hey, there's lunch and supper and whatever else we need.

Now back in the 50s in El Paso, Texas, brother Hagen was down on the... He'd stepped off the platform and, and he turned around and jumped up on the platform. And just as he did, his foot was about to come down and I'm on a brand-new tape recorder. He was about to land on this woman's tape recorder and he dodged and fell and, and knocked his, his elbow out of joint. And really, really injured it. And he went into the hospital and the doctor put it all back and uh, they kept him in the hospital overnight just to observe it and he was just lying there, in the, in, in his hospital room and no pain. He just lying up there with that thing. Sure. And Aretha had just left, and he heard somebody coming down the hall, heard their shoes on the, on the hospital floor, you know, hard floor. And the door to his room was open about six to eight inches. Then he realized that whoever it was, was coming in his room and he said, he just turned and looked, and the door opened. And there was a man's foot in a Roman Sandal, push the door open and came in and he looked up and it was Jesus. In an open vision. I'm next Lord.

He came in, walked over, got the chair, that Mrs. Aretha Had been in, scooted it up to the bed and sat down there and talk to him about the Prophet's ministry and talk to him about a number of other things for over an hour and a half. Now here's one of the. There are two things I wanted to, she wanted to say to you that Jesus told brother Hagen in that appearance. He said, "If you will call on me when someone is to be operated on and have surgery done, call on me. I'll get involved in it". And He said, "I will speed up the healing until the doctors will be amazed at it". And then He said this, "I am not opposed to my children being rich. I'm opposed to them being covetous". He said, now, listen, Heaven's economics, "If any of my children, and if you will listen to me and do what I tell you to do, I will make you rich. I'll do it", He said.

But now listen to that. You have to listen. You have to hear it. Hallelujah. Right down to, "Lord, what is my offerings like? What should I be doing"? In order to be accurate at this you have to practice it all the time. You have to practice the presence of God all the time, all the time. Talk to the Lord all the time. Someone asked me as we were sitting, "How long do you pray"? Oh, he said, "Um, at the most 15, 20 minutes", what? Yeah, but he said, "I don't usually go 15, 20 minutes without praying". You know, in other words, he doesn't, and there's nothing wrong with taking long periods of time because there are times when you need to be doing that, particularly in seeking the wisdom of God.

Now, it's a constant practicing of His presence. "Lord, what do you think about that? Yeah. Okay. You know, Lord, I've driven to work this same route every day. What about going a different way today"? "Brother Copeland, I don't see any use in that". I know it cause, because you can't see much. "I don't know any other way". Maybe you better find another way. Now, when you practice the presence of God on a daily basis and the trade center gets hit, you're going to be the one that hears His voice. The other people die. Are you listening?

One man was about to walk in the door and all he heard was "Run"! And he just took off running and ducked down in the subway just as a thing hit. You practice that. You learn it, you walk in it, you listen to it all the time. You're listening all the time. What do I do? What do I do in this offering? Help me Lord, all the time. All the time. You quit listening to stuff on the radio and you, you put your CDs in there. Amen. Y'all to listen to one good CD a day. I mean it. Hallelujah. Or just load your phone up, get the BVOVN app. And you're walking around with those ear buds in your ear and you know you, you got that look on your face and they think, "Wonder what song their listening to"? Faith's coming. Thank you, Lord.

Can you see it? This is so big. It's big in healing, it's big in the evangelists, big and everything, but financially, this is where the problems are. This is where the problem hearing is. I mean everybody in the whole world got a different idea of what's supposed to be done for us. Now 99% of it is wrong. Amen. And sowing and reaping and everybody does it. 100% of the living human race does it every hour of every day. Words are seeds, actions are seeds. You can't get away from the laws that govern this planet. It is a Word created Word upheld an environment. Every human being on this earth lives under that system and in that system, and you've got two different kinds of financial systems in the earth.

You can't change it. You can't get out from under it, but you can change the words by which you live. That devil can't change it and God won't. The devil stuck with it. He stuck with it. Jesus said, "I only say what I hear my Father say. I don't say anything alone. I only do what I see my father do. I can do nothing of myself". That's reassuring isn't it. The sower sows the word. These are they by the wayside where the Word is sown. because Jesus said, "It's the father that dwelleth within me. He does the work". What work? Whatever you've been saying. Huh? So the sower sows the word. Jesus is right there. He's the high priest of our confession.

Now think about it. The sower sows the word. These are they sown on good ground. Hear the Word and receive it. Now what's happening? You hear it and you begin to believe it and you begin to say it. And the father then is licent to do the work. Amen. The sower sows the word. Satan comes immediately and said, "No, no. You hear what they've been saying about you. No, no, don't pay no attention to Him". Quiet because he knows if he can get you or me trying to hear His Word and believe it and begin to say it. Now he is licent to do the work.