Kenneth Copeland - The Anointing Is In You 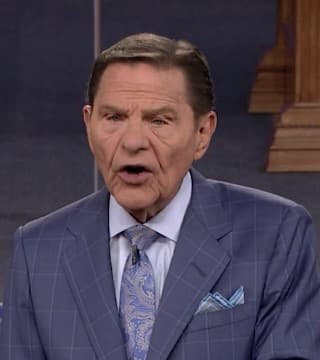 Now we can prove by the Bible that he preached he took this text and preached it every where he went and we'll see that later on. Now. It's just simple as this. It's the same today. If you believed what His said, if you believed He's anointed, then the anointing will flow, If you didn't, you didn't get anything. And he's proven this right here where he's preaching there in Nazareth. This is going to be proved now right here. And watch this. He preached this message All bear him witness and wondered at the gracious Words. He's preaching the blessing. He's preaching the grace of God. God loves you and I love you and he's here to heal you and to love you.

And they said, what is he talking about? He was raised right here that proceeded out of his mouth and they said is this not Joseph's son? No it wasn't And He said unto them, You will surely say unto me this proverb, physician heal thyself. Whatsoever we have heard done in Capernaum, which was Jesus' headquarters now and his home in which he lived, do also hear in your country. And he said, verily I say unto you, no prophet, he called himself a prophet there, which he, which he ministered most of the time. Most of the time, you hear me now? He Preached most of the time as a teacher. Taught, preached, and healed, Matthew nine. So here he's talking about himself being a prophet.

No Prophet is accepted in his own country, but I'll tell you of a truth. Many widows were in Israel in the days of Elijah when that heaven was shut up, three years and six months when great famine was throughout all the land, but unto none of them was Elijah's sent, saved under Sarepta, city of Sidon unto a woman that was a widow. Many were lepers were in Israel in the time of Elijah, the prophet, none of them was cleansed, saving Naaman the Syrian, and all day in the synagogue when they heard these things were filled with wrath, rose up and thrust him out of the city and led him under the brow of the hill where upon their city was built that they might cast him down headlong. But he passing through the midst of them, went his way and came down to Capernaum, passing through the midst of them.

He went home, he lived in Capernaum, had a home there, a large, now they, okay, look in the sixth chapter of Mark. Account of the same thing except Markgives us insight. Praise God. Verse five verse four a prophet is not without honor, except in his own country and among his own kin, in his own house. He could there, didn't say he wouldn't, said he couldn't. He could there do no mighty work. Say that He laid his hands upon a few sick folk and healed them. And he marveled because of their unbelief. Now what is the cure for unbelief? Faith cometh by hearing and hearing by the Word of God. And he went round about the villages teaching.

Now let's go over to Acts chapter 10 and we'll see this again. And um, and we'll see here that he preached this everywhere you went. This is, uh, you know the story that the Peter is on the housetop and saw the sheet fall down and so forth and wound up at Cornelius's house and um, so in verse 34, Peter opened his mouth and said of a truth, I perceive that God is no respecter of persons, but in every nation he, that feareth him and work of righteousness is accepted with him. Now notice this the Word, what Word, how God what? The message Jesus preached what he preached. The Spirit of the Lord is upon me. For he's anointed me to preach the Gospel. That Word which God sent unto the children of Israel, preaching peace by Jesus Christ. He is Lord of all. Well, what was he preaching? How God anointed Jesus of Nazareth with the Holy Ghost and with power who went about doing good and healing all that were oppressed of the devil.

Now, Jesus didn't heal everybody. We know that. We already read that, but he did heal. There were, there were cases and instances where the scripture said he healed them all. He healed all that needed healing, in one case, he healed all that, touched him or his garment and other cases, but he did heal all manner of sickness. And all manner of disease. There was not one, not one sickness or disease in existence that he didn't eat. Man, he, he ripped it to the devil. Didn't he? Glory to God. Oh, hallelujah to his name. Thank you Lord Jesus. The anointing. Say t he anointing. Praise God. Say it again. The anointing. The anointing.

I'll tell you another, uh, told you last night when you're preaching and you hear something, you can prove it by both the scripture. I had the Lord say this to me just dropped it in me. He said when he killed the lion and killed the bear with his bare hands. He had Sampson on his mind, he was bleeding for that. All my people, the dwellers in Zion be not afraid of the Assyrian. He shall smite thee with a rod shall lift up his staff against the, after the manner of Egypt and yet a very little while and the indignation shall cease and my anger in their destruction and the Lord of hosts shall stir who the Lord of hosts shall stir up a scourge for him according to the slaughter of Midian in the rock of Oreb and as his rod was upon the sea so shall He lift it up after the manner of Egypt and it shall come to pass in that day that his burden shall be taken away from off thy shoulder and his yoke from off thy neck and the yoke shall be destroyed because of the anointing. Hallelujah.

Gloria first heard Brother Keith teach on Genesis six three, the days. And this is the only age in the Bible that God said, not three score and 10. That was a curse that came on disobedient people. God didn't say that. They said it and God said, what you have said has entered into my ears and nobody over 20. Oh, get out of this desert alive. You're going to die with you, I don't care if It wasn't anything wrong with you or not. You're not getting out of here. God said 120. Yeah, well Gloria and, and I listen to Keith on, and it captured my attention. So, Glory teaching healing school and I'm sitting back behind the curtain and she's reading that and she read a footnote out of the amp, the classic amplified from the 90th uh, Psalm. And um, and it made that statement that it never was God's plan for life. And he said the, and actually if you look it up in other translations, and just go back to the, the Hebrew texts there. He said the normal lifespan shall be 120 years.

Well, medical science without the Bible. Knows that this physical body, if you can keep it, well will live 120 years. They just can't figure out how to get there. Now listen to me. That's in book one sixth chapter. That's pretty close to the front. Yeah, that means now I'm going somewhere with this way of where the anointing is concerned from that scripture. All, all the food laws are based on living 120 years. When the scripture says with long life, I'll satisfy him and show him my salvation. It's not our prerogative to figure out what long life is. We already know a 120 years that's long life according to scripture. Well, and it just kept getting heavier and heavier and heavier on me and I won't go into all that, but I'll tell you this. He said Kenneth, that's just as much My Word is by my stripes you were healed because we were talking about the anointing, the anointing to preach, the anointing to heal. Amen.

The prosperity anointing, the anointing of increase. He said, I have anointings from 80 to 90 I have anointing from 90 to a hundred and He said, I have an anointing from 100 hundred to 110 and he said, I don't have any of them in the earth. Now let me, let me open your eyes where that kind of arbitrary, but then just, I'm talking about just a couple of weeks ago and, and I'm, I'm still praying, looking at this and here's what he showed me. He said, Kenneth, do you know anybody that's been in the ministry for 90 years? Huh? Okay, figure it out. I've been in the ministry 52 years. I've got 38 more to go. Do the math, boy that hit me right between eyes, it hit me in the heart. Somebody that's been active and strong. I'm not talking about some weak or dried up old man. Moses is my vision man. He climbed Mount Nebo. At a 120 years.

Now that boy, listen, doesn't that open up your, your thinking in your mind been in the ministry for 90 years. Jerry and me are still ripping. Right along with Keith, glory to God. Like Keith said, We going to get so old, old people call us old. Anointing, say anointing. The burden removing, yoke destroying, power. Of the living God.