Kenneth Copeland - Stand Up And Take Your Place In The Blessing 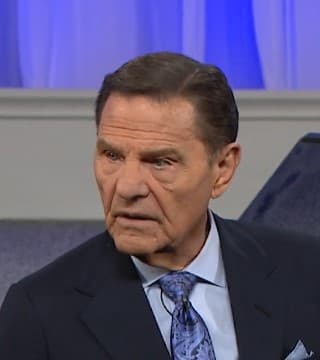 Well, here we are Friday. Praise God. It seems like in some ways we just got started. Three weeks in studying the curse of the law. Let's read out golden text once again. Final time in this study. Galatians 3:13. Christ the anointed one, by his anointing has redeemed us from the curse of the law. Being made a curse for us, for it is written cursed is everyone that hangeth on a tree. So that the blessing of Abraham might come on the gentiles through Jesus Christ that we might receive the promise of the Spirit through faith. Now then, let's read beginning with the 26th verse. For you are all the children of God, by faith, in Jesus Christ. For as many of you as have been baptized into Christ have put on Christ. There is neither Jew nor Greek, there is nor bond nor free, there's neither male nor female for you are all one in Christ Jesus. And if you be in Christ, then are you Abraham's seed and heirs according to the promise. Glory to God.

Heirs according to that blood sworn oath, Hallelujah, that we studied this week. And that has just come alive in this place today. Hallelujah. We are the beneficiaries. Thank you, Lord Jesus. I'm going to read that again. And if you be in Christ, then are you Abraham's seed and heirs according to the promise. Now, I want to read you something here. Now, we read in that 14th verse, that by faith we received the promise or what the Sprit promised when we went though all of that, those wonderful things about the promise. Brethren, I speak after the manner of men. Tho it be but a man's covenant, yet if it be confirmed, and of course we know it'd been confirmed, no man disanulleth or add it there too. I want you to get this 16th verse. Now, to Abraham and his seed, and if you be in Christ then are you Abraham's seed.

Now, I want you to get this now. Now, to Abraham and his seed were the promises made. He saith not and to seeds as a many are plural. You get that? He saith not and do seeds as of many. But as of one to thy seed which is Christ. 19th verse. Wherefore then serveth the Lord? It was added because of transgressions, 'til the seed, seed, 'till the seed shall come to whom the promise was made. And it was ordained by angels in a hand of a mediator. Is the law then against the promise of God? God forbid. For if there had been a law given which given life verily, righteous come men by the law. But the scripture hath concluded all understand that the promise by faith of Jesus Christ might be given to them that believe. Now, I wanted you to see this. Jesus is the one, he's the seed to whom the promise was made. When God was talking to Abraham in the blood of the ram he was talking to Jesus. That's the type. He was talking to Jesus. Hallelujah.

Now, I want you to see it. You better fasten your seatbelt. Go buckle her up. No unbuckle it. If you be in Christ then are you Abraham's seed? Not plural. Oh, he said. Yeah. Me too. That promise to Jesus, he walked on it, he preached it. Every miracle. Every person raised from the dead. Every sickness healed. Every miracle. The fish, the loaves, everything. Every bit of it. All of it. He was functioning as the seed of Abraham. And it was that covenant that raised the dead. It was that covenant that stilled the sea. It was that covenant promise. And you and I have the very same covenant promise and it is just as singular to you, it is just as singular to me. The water and the wind will hear you just as well as he heard Jesus. When we finally get to that place where we begin to say, "Yes, glory to God".

"Yeah, but Brother Copeland, I spoke to the wind and the sea and it didn't quit". Well, what did you quit speaking for? I don't mean you just... I bet you pray. Stand up and take your place. Peter could've done it. Either that or Jesus was falsely accusing him, because he said, "Where's your faith"? Because he'd already said, "Let's go to the other side". Now, the power was in that. Peter could've stood up there and said, "In the name of my master, I'm not going to wake him up, he needs his rest. We're going to the other side if we have to walk. Now, wind, shut up. Water, be still". It would've worked for him the same as it did Jesus because Peter was the seed of Abraham. Chosen by Jesus on his own staff. Hallelujah. So what are we going to do? Oh, I'll tell you what, I've got my finishing moments here that the Lord's set before me. We are dealing with the law. Amen. What was happening out there on that mountainside? One group on one mountain, one on the other. I call heaven and earth the record before you this day that I said before you, life and death, blessing and cursing.

Now, I know it isn't but I'm not trying to point for real. This is an illustration, all right? Now, both north and south are the same thing in that they are directions of the compass, but in every other way they are exact opposites. Are you following me? When Adam fell the law of the Spirit of life was in complete authority, absolute authority. What happened to him? In this direction everything was perfect, but by an act of his own will... Now, when he was here, he was connected to God. They were one in the Spirit.

Now, I'm going to interrupt us just for a moment and remind you that the Bible says that the born again, the new creature, is one with the Spirit. Hallelujah. We've been re-pulgged. Amen? As long as he was like this, he and God were one. Thank you, Lord. But when he did this, spiritual death. Spiritual death is not physical death. Spiritual death, see he died spiritually that day. He lived physically nigh over 900 years. But he died spiritually that day. What does that mean? He was separated from God's spirit on that day. The very life of God was gone out of his spirit. Even though he had a covenant relationship with God, it was far less than what he had before? The law of the Sprit of Life in Christ Jesus. Oh, glory to God. Has what? Made me free. Oh, glory to God. The law, say it with me. The law of the Spirit of Life in Christ Jesus has made me free from the law of sin and death. Glory to God, hallelujah.

Now, turn with me to the book of Mark and let's take a look at the law of sin and death. Of course, there's a lot of other scriptures we could go to but we're short on time. We'll use this. The 16th chapter of Mark's gospel. Go ye, 15th verse, into all the world and preach the gospel to every creature. Watch. He that believeth and is baptized shall be saved. He that believeth not shall be damned or condemned. Condemnation. Can you see it? It's very plain. That's the reason he said this in the first place. Get out there and do something about this. Get them free from that law of sin and death. Preach this gospel. Just keep preaching it, praise God. Thank you Lord Jesus. Under the law of the Spirit of Life is the blessing. Oh, hallelujah.

And we've talked about the blessing and the promise. This is all under the Spirit of Life in Christ Jesus. The law of the Spirit of Life. Glory to God. In Christ Jesus. The good Shepard, in John 10:10. The thief cometh but for to steal, to kill, and to destroy. That's under the law of sin and death. But I have come, I have come, that they might have life and have it more abundantly. How are we, Tim, on time? What do we got? Just these last couple of minutes here. Glory to God. I pray for you, I pray with you, I stand with you and all of you. Online, all of you. On the network, all of you watching by any means tonight. I stand with you in the name of the Lord Jesus Christ of Nazareth. If you've never accepted Jesus as your Lord and Savior do it right now.

Lord Jesus, come into my heart. Take my life and do something with it. I receive you as my Lord and Savior. I repent of sin, repent of all of the past and roll all the care of it over on you, Jesus. You're my future and I love you. Fill me now with Your precious holy spirit. I receive him in the name of Jesus. Thank you, I'm born again, filled with the spirit by faith.

Now, give him praise in the name. Somebody, somebody just walked out of the law of sin and death and stepped boldly into the law of the Sprit of Life in Christ Jesus. Well, how about it? Thank you, Lord.