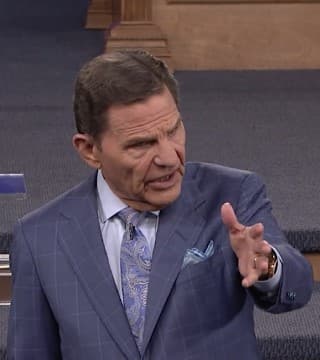 Let's go back to the book of Philippians. That seventh verse again even as it is right for me to think this of you all because I have you in my heart and so much in both in my bonds. We read last night from the 16th chapter of the book of acts. What happened in that jail at Philippi? Man, they knew what kind of anointing hit that place that night and shook that place down to the very core of it and all of their, all of their chains fell off and they couldn't move that they couldn't move. They flat couldn't move. Nobody. The glory was in there. I believe. If you look at that clearly you can see the glory was there and actually it was so strong that we read about the jailer. He called for a light, but there were things you already knew before he called for the light. Sure, but anyway, here's what so vitally important. They couldn't move, if they could have that are run like rabbits. They couldn't move.

Now, compare that to in the temple. When the cloud came in, they couldn't move, right? Nobody could move. The priests couldn't do anything because of the glory presence. The glory was present in that prison that night and it was glorious and it was. It was there. It was s strong. So, everybody in that church knew what was on Paul and Silas that night they experienced. Now, what's he saying to them, that same anointing that was on me, that same anointing that was on Silas that night. When you pastor, were saved that night you couldn't break and run.

Now, real quick. Just look over there at the fourth chapter and I'll prove it again. Verse 14 not withstanding, you have well done that you did communicate with my affliction. Now you Philippians know also that in the beginning of the Gospel when I departed from Macedonia, no church communicated with me as concerning, giving and receiving, but you only for even Thessalonica you sent once again onto my necessity, not because I desire a gift. I desire fruit that may abound. Sure. Your ranking, you have a heavenly account. I have all and abound. I am full. Having received of Epaphroditus the things which were sent from you, an odor of a sweet smell, a sacrifice acceptable, well pleasing to God, but my God, no. Wait a minute. No, no. Hey, come on. He didn't say you are gone, My God. I'm an apostle. You're a pastor. I'm an apostle. You're a brick layer. I am an apostle he's saying, my God shall supply all your need. You're my partner. Your needs will be supplied on an apostles level. Not on the level of a brick layer. Not on the level of a school teacher.

It was written concerning David. We wont to turn there to look at it, but you read it later when they came back, found all their family gone, all their goods gone, and they went on a forced march and they were tired. I mean, these guys were wore out. They wept until they could weep no more. David inquired of the Lord said, shall I pursue? And he said, go after and you get it all back. Well at the close of that, there were some of them now that they were so fatigued and there was a river here that had to be crossed. They were so fatigued they couldn't make it across the river. So David said You stay here and you stay by the quarter master. You stay with what we have here. You Guard this. They went on across the river and took care of business and they came back to divide up the spoil.

Now there was, there were some ungodly men in that troop and they fought well for David. Served him well. They said, Nah, Nah, Nah, Nah. Now wait a minute. No, no. This bunch didn't risk their lives. They just sat over here and did nothing throughout this whole fight. Just give them their families back, but they don't get any spoil. They didn't risk their lives. Listen to what David said. You remember what he said? He said it was God that gave us that victory. We didn't win that. We were, in fact, I'm adding words to his mouth now. We used to fight. We were too tired to fight these people. We've been in a force march for hours after coming right out of combat before we got here. If it hadn't been for God, we'd all died here today. He straightened them out and he said, we will share the spoil with those that stayed behind as well as those that went forward to fight and it became an ordinance and Israel from that day forward.