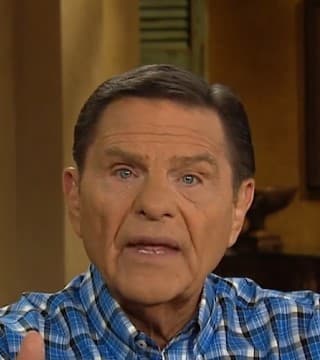 Father, we thank You for this broadcast today, and we worship You and praise You. Thank You, sir. We open our hearts and we open our minds to the heavenly gifts, the things that You've done just because You love us. And we praise You and we reach into You by faith to receive revelation from heaven, to receive peace, joy, healing, deliverance, well-being, throughout this whole radio and television audience. We receive it. In Jesus' name, amen.

Let's open our Bibles again today, if you would, to the 3rd chapter of John's Gospel. And we're talking about the gift of God. Now notice this, 16th verse, "For God so loved the world, that he gave his only begotten Son, that whosoever believeth in him should not perish, but have everlasting life. For God sent not his Son into the world to condemn the world; but that the world through him might be saved". Now notice it said, "For God so loved the world, that he gave Jesus". So write this down, "Jesus is the heavenly gift, and I receive the gift right now".

Now then, Luke 11, and let's begin in the 9th verse. "And I say unto you, Ask, it shall be given you; seek, and you shall find; knock, and it shall be opened unto you. For everyone that asks receives". "Well, Brother Copeland, everyone"? Oh, yeah, everyone. There is though the element of faith. Jesus said, "Everyone that asks believing, receive". And then, of course, we understand that. Well, if you would, let's just turn back over there again, where we were, John 3. "For God so loved the world, that he gave his only begotten Son, whosoever believeth in him," so believing and asking, asking, believing in him. Amen? You made the connection now? Now, see, people have the idea that, "Well, there's bound to be something I have to do". Oh, yeah, there is. You have to believe. Amen. And ask, okay?

Okay. Let's go back over there again now to Luke 11. "Ask, and it will be given you; seek, and you shall find; knock, and it shall be opened to you. For everyone that ask receives; he that seeks finds; to him that knocks it shall be opened. If a son shall ask bread of any of you that's a father, will he give him a stone? if he ask a fish, will he for a fish give him a serpent? If he shall ask an egg, will he offer him a scorpion"? Well, of course not. "If you then, being evil, you know how to give good gifts to your children: how much more shall your heavenly Father give the Holy Spirit to them that ask him"? Well, Jesus is the heavenly gift. So is the Holy Spirit. Amen? Glory to God.

Now let me back up here a second because this will be the one that might trip you up a little bit, but again, think this through. Healing doesn't just belong to the church. Healing belongs to the world. "Really"? Oh, yeah. Amen. God'll heal sinners. I've seen it happen. And you think about it a little bit. Nobody got born again before Jesus went to the cross. Amen. And another thing, healing and miracles in the church are the church's advertisement of Jesus to the world! Amen. We've had people, I've seen it happen, I'm thinking about it. Well, yeah, yeah, I can tell it that way, I believe.

Years ago, our ministry had put a satellite dish in every Texas prison, penitentiary, jail throughout the state of Texas and eventually grew to Arkansas and Oklahoma, Colorado. Well, we put satellite receivers in there and they were bringing our broadcast down, and there were people in the prisons were watching them. And this young man came to me and he had tears in his eyes, and you know, I've preached in a lot of prisons, seen a lot of wonderful things happen, preached on death row in different places and that kind of thing. Marvelous, wonderful thing. Had tears in his eyes. "Brother Copeland, I really need you to forgive me". I said, "For what"? "Well," he said, you know, now, they had the television set would be there in the dayroom or someplace where they could gather, but it had a metal, mesh cage around it where you couldn't change the channel. And these guys are having to watch us preach all the time. That's the only TV they could get at certain times of the day.

Now, let's go over to I Peter 2... Sir? No, the Lord is saying for us to go to Isaiah first, and we'll look in the 53rd chapter of the book of Isaiah. And Isaiah 53:4, now listen to this, "Surely he," Jesus, "has borne our griefs, carried our sorrows: yet we did esteem him stricken, smitten of God, and afflicted. But he was wounded for our transgressions, he was bruised for our iniquities: and the chastisement of our peace was upon him; and with his stripes we are healed". Now, in the Hebrew text, the word "griefs" and "sorrows". "He hath borne our sicknesses, diseases, weaknesses, and pains and our griefs and sorrows". don't leave the griefs and sorrows out, because when you think about it, grief and sorrow are the products of pain and sickness and disease and sin.

Now, let's make sure of that. Let's go to the book of Matthew, Chapter 8. And we're looking here at God's heavenly gift. Now notice what he said there? "He was wounded for our transgressions, he was bruised for our iniquities: chastisement of our peace was upon him; and with his stripes we are healed". Now let's see how the Holy Spirit translates that and interprets that. Verse 16 of the 8th chapter of Matthew, "When the evening was come, they brought unto Jesus many that were possessed with devils: he cast out the spirits with his word, and healed all that were sick". He didn't turn down anybody. He didn't turn down deliverance to anybody. The only reason anybody wouldn't get anything is because they didn't believe it. And over in the 6th chapter of the book of Mark, in His own hometown, they refused to believe it, and actually decided they'd rather kill Him than believe what He said. And there it said, "he could do no mighty work". It didn't say He wouldn't, it said He couldn't. There was no connection with them.

Now, let's go over to I Peter. I want you to notice the relationship of something here now. I Peter 2:24, "Jesus his own self bare our sins in his own body on the tree," or on the cross, right? He bore our sicknesses, diseases, weakness, and pains, our transgressions, our sins, in other words. "By whose stripes we are healed". Now, notice this. "Who his own self bore our sins in his own body on the tree, that we, being dead to sin, should live unto righteousness: by whose stripes ye were healed". Now, is "were" present tense? No. Is "were" future tense? Is He going to bare them? "Well, I know He's going to heal me someday, in his own good time". Well, that sounds humble and all of that, but it's just actually a lie from hell. "By whose stripes ye were healed".

Now, let me ask you something. When did he bare your sins? "Well, Brother Copeland, it said, 'his own self bore our sins in his body on the tree.'" Yeah. Well, when did He bare your sickness, disease, weakness, and pains, griefs, and sorrows? On the same day, on the same cross, shed the same blood. Let me ask you another question. Does salvation belong to us? "Well, yeah. Brother Copeland, you've already said that a dozen times". I know it, but I'm asking you now. "Well, yes, Brother Copeland, salvation was God's gift to the world". Yes. Amen. "By whose stripes ye were healed". That's past tense. I mean, brother, that happened 2.000 years ago.

No, they haven't all gone to heaven, and they aren't all going to heaven. It's the one who receives the gift of righteousness, the ones that receive Jesus as Lord and Savior and activate that salvation. It belongs to anybody that'll receive it because it's a "whosoever" gift. But you have one thing to do. Jesus did all the hard part. We only have one thing: Receive it. Hallelujah. Now, there could have been a gift sitting on your table. Let me give you an illustration of this. I started to say, you could have a gift sitting on your table and sit there and look at it all your life and never get any good out of whatever's in there because you didn't open the thing.

Well, when you said, "Jesus, come into my heart, take my life and do something with it," I mean, that's when you opened the gift of salvation. Glory to God. And then when you said, "Oh, Jesus, you said in Luke 11th chapter that you give the Holy Spirit to all that's asking. I'm asking". And you received because He said so. You received the baptism of the Holy Spirit, and you begin to speak in the heavenly gift of supernaturally speaking to God. "He that speaks in an unknown tongue speaks not unto men, but unto God". "Howbeit in the spirit he speaks mysteries". All of that's a gift. All of it is a gift.

There's a story about a woman that served the Queen, this is a true story, almost all of her life, very young girl when she did. And it came time for her retirement. The Queen gave her a document that she had framed and had it put up in her little place. And after she left the employment of the Queen, she just kept going down. She got sick. She was living in a very damp, old place down by the water, and was sick, and she didn't have enough to eat. Finally someone got ahold of a doctor that came by there to see if she had pneumonia. He said, "This women needs to be taken care of". And he walked over there and looked on the wall. That document was a strong pension to take care of her for the rest of her life on this earth because the Queen loved her and wanted her taken care of. She couldn't read. She just knew it came from the Queen, was special. She hung it on her wall, but she never unwrapped the gift until that doctor read it and saw what it was.