Kenneth Copeland - Go For The Gold In Faith 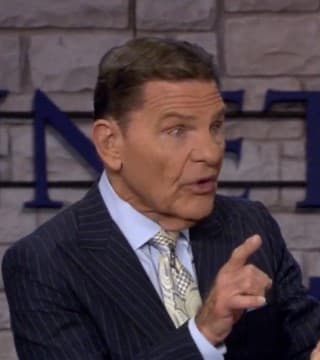 Let's open our Bibles tonight to Mark 11: 22-25. Hallelujah. You been around here very long, you knew that's what I was going to say. Some years ago, few years ago, the Word of the Lord 2014 came to me. And saying, "You've been teaching faith from where you are now. And new people don't have any idea what you're talking about". Now He said, "I want you to go back to the very fundamentals. The A, B, C's of faith". Amen. Go back to the very fundamentals. Well I don't mind telling you, I struggled with it. 'Cause I hadn't gotten back to those basic fundamentals. And my, my, my. I didn't realize that I had let so much slip when it comes to the fundamentals.

One man that was... forgive me. I don't remember his name right now, but he was in that same article that I read about Vince Lombardi. He got so basic with his basketball team, he taught them how to put on their socks and how to tie their shoes in order to impress them that they're not as big as they thought they were. And then didn't lose anymore. Now, I really do enjoy comparing what we're talking about and going to be talking about, about the fundamentals of faith, with an Olympian. Because so much of our time in the development of faith depends on our own personal choices. Our own determination.

What are you going to do with the Word of God? What are you going to do with your faith? Every one of you that's born again has faith. Every single one of you. Those of you that are not born again, you have faith too. It's called fear. Yeah, it's faith in death. Faith in something's ability to hurt you. Just reverse fear, reverse faith. So now, God has dealt unto every born again child of God the measure of faith. Same measure. Exactly the same; every one of us got exactly the same portion. And we know it'll work because it's the faith of Jesus. He's the author. Huh? Jesus is the author. Thank you.

Romans 12:3 says, "God has dealt unto every man, every human being, every born again human being the measure of faith". That Olympian had to make a decision. I've got this body here. And my mind. Now what am I going to do with it? How far am I going to go with this thing? And get all pumped up about it. And after about two weeks of hard workout and you get a blister on your right little toe, "I believe I'm called to do something else here". "Well, Brother Copeland, I've confessed that eight times and didn't anything happen". Yeah it did; you confessed it eight times and gave up, that's what happened. So the decision. Somebody has to make a decision here. The decision is yours. God can't make it. Nobody else can make a decision for you. You have to make it. I said the decision is yours. The commitment is there. And oh, I tell you what, God will meet you, but you gonna have to do it with faith. You're going to have to just rise up and come up above it in the name of Jesus.

Now then. Mark 11:22. "Have faith in God," - cross reference says - "Have the faith of God. For verily, I say unto you that who so ever shall say unto this mountain be thou removed and be thou cast into the sea and shall not doubt in his heart, but shall believe that those things which he says shall come to pass. He shall...", listen to this, "He will have whatsoever he say. Therefore, I say unto you, what things so ever you desire, when you pray, believe that you receive them and you shall have it". You will have them. You will. "And when you stand praying, forgive, if you have ought against any, that your Father also, which is in Heaven, may forgive you your trespasses".

Now let's look quickly at Romans Chapter 3. And look at the 27th verse. Romans 3:27. "Where is boasting then? It is excluded by what law of works? No. But by the law of faith. Faith is a spiritual force. It is governed by spiritual law. It is very, very... how can I put this? It's very, very predictable. It's the law of faith. Look in the 8th chapter of Romans. "There He is. Therefore now, no condemnation to them which are in Christ Jesus, who walk not after the flesh, but after spirit. For the law of the Spirit of life in Christ Jesus has made me free from the law of sin and death".

Spiritual laws work. They work all the time. God, a Spirit, created all matter. All material things, natural, physical things. The result of spiritual law - physical laws. The laws of physics, huh? They mirror spiritual laws. Why? Why didn't someone fly an airplane in 18... let's go back further than that. Let's just talk about 747. Why The laws to support it were there. It would've operated perfectly. Nobody understood the law. Did God? Yes. You know what? Oh, dear Lord. Oh help us Jesus.

Back a number of years ago, they did a survey. And they went around the different college campuses asking students if they thought God understood radar. You cannot imagine how many of them said, "Well, of course not. We invented radar". No. The principal came from watching a bat. He's blind. But he don't miss. Huh? Does God understand radar? Come on, man. Does God understand faith? Does God understand faith? That was weak. Of course He does. A whole lot more than we do. But the same God is residing right here on the inside of you. And He will teach you. He will train you, He will show you. He will show you things to come and all that you will take, He'll dish out. Brother and sister, I'm telling you, you can know more about faith in this week than you ever knew in all your life put together if you'll just open your ears and say, "I'm here God! Feed it to me"! And I'll do something with it. All right, thank you Lord Jesus.

Now then, let's go back to Mark 11:22. Let's look at that. The very first fundamental of faith. Believe it in your heart and your inner being, then say it with your mouth. Okay. All right. Then how did you know what I said? Believe it... you can say the first law of faith. Believe it in your heart, then say it with your mouth. Faith is a spiritual force. Spiritual forces are the most powerful forces that exist. God is a Spirit, hallelujah. Amen and so are you and so am I. We're spirit beings. Faith is a spiritual force generated in the reborn or the recreated human spirit and released with words through the mouth followed and supported by corresponding action. Praise God.

We've seen in Mark 11:23. Now let's go to Romans 10:10. We mentioned that, I want you to put your eyes on it. For with the heart, man believeth unto righteousness. And with the mouth confession is made unto salvation. Let me read it again. For with the heart, the inner man, believes unto righteousness. Believes unto right standing with God, being right in the eyes of God, right with God. But with the mouth confession is made unto salvation. Now, do yourself a favor and look up the Greek word, sozo, that translates salvation. It means, of course it means what we call it to mean, which is being born again, but it really covers the whole spectrum of being made sound. Recreated, healed, delivered.

This is the reason why the Greek speaking person received Jesus as healer at the same time they received him as savior because that's the word that they heard. And being English speaking people, we didn't hear that. So we had to cut it into two or three different pieces when all the time that Greek word just simply covered it all. So through that, there's a lot of religious brainwashing that went on. Now then, 2nd Corinthians chapter 4, verse 13. We, having the same Spirit of faith according as it is written, I believed and therefore have I spoken. We also believe and therefore we speak. What you say is your faith speaking. I don't care what you say. It's your faith speaking. It may be faith in something you sure wish you didn't have. Well, if you wish you didn't have, you better shut up saying it. Amen.

Now then let's go back. This one is almost startling in the 12th chapter in the book of Matthew. I tell you, when I first saw this I was kind of stunned because of my just having a thinking mode, like everybody else thinks... in the 37th verse, "For by thy words thou shalt be justified or made right. By thy words, shalt thou be condemned". Now that puts a high priority on what's coming out of our mouths. Look at the 36th verse. That but I say unto you, every idle word that men shall speak they shall give account thereof in the day of judgment. Most particularly, you and me. Idle words, words that do not proceed from faith. Trash, throw-away words. Particularly based in debt, they are dangerous, they are condemning, they will weaken and make your faith so feeble that you're just... you'd have to fight to hang onto your very physical life. These kind of words breed worry. Worry is a sin.

Well, the scripture says right there in the book of Romans, Whatever doesn't proceed from faith, is sin. And you think about... worry is fear-based. Idle words, thrill me to death. I'm just dying to go. Well, Brother Copeland, I didn't mean it. Satan don't care nothing about what you mean or what you don't mean. He'll accuse you out of what comes out of your mouth because he knows the Bible. He knows what God said about that, he knows it very well because it dethroned him. He had no tempter so he's doomed forever. Amen. But thank God we've got a way out. No more idle words. No more idle words. No, no. You may be a few days without anything to say, that's good. That's good. Amen. We're in training. You going for the gold? We're in training. If you're picky enough, and you train, you fight the way you train, and you train the way you fight.