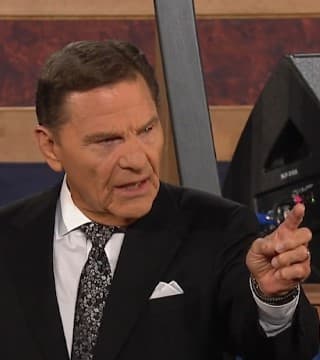 Two things I want to say about this book tonight. This is just as much a manifestation of God in the earth as the father, the son, and the mighty Holy Spirit. "In the beginning was the word and the word was with God and the word was God, the same in the beginning with God". This is a copy of two blood sworn covenants, blood sworn oath, the most powerful form of agreement known to man. The first one in the blood of animals a type of the blood of Jesus but the second one is a covenant between God and an immortal man Jesus. In his blood, in the blood of God.

That's so exciting I can hardly stand here and talk about it. You see You can't break this covenant. You can break your fellowship with it but you can't break this covenant brother. It's between a holy God and an immortal man. Hallelujah. And when it becomes precious to you it'll begin to work for you. Every word of it, every word of it Steve, blood sworn, blood sworn. When Mr. Stanley, the great missionary was doing his best to enter the interior of Africa he couldn't get in there. He's a white man, they ain't going to let him in there.

And finally someone told him that covenant, the Hebrew word for covenant literally means a cut where blood flows, holy covenant. They said, "You're going to have to cut the covenant with a chief, someone that's powerful or you're never going to get int the interior. You'll be out here just out here on the outlying coastal areas for the rest of your life". He said, "Well okay if that's what I need to do". So, they entered into this covenant and Mr. Stanley had stomach problems and ulcers and he had a goat. And that goat's milk was pretty well what he was living on.

And so, they entered into the covenant and in the covenant there was a blessing and there was a curse. "You break this covenant, you and your family deserve to die. You keep this covenant and we are family for life and what I have is yours and what you have is mine". And so, you had to give a covenant gift. And so, Mr. Stanley's interpreter and helper says, "You need to give him your goat". He said, "I can't give him my goat. I've got to have that goat man". He said, "You need to give him your goat if you want to get in there". He said, "Okay". Well, and the king gave him his staff and it's markings and windings around that staff.

Now, Mr. Stanley didn't know this but that staff would be like today, would be like a four star general walking in the room in uniform. It's obvious who he is. And that staff made it very obvious who this king was. He said, "All I get, all I get is this staff, this stick is all I get". "Yeah", he said, "That's what you get". But every one that saw that staff, he went anywhere he needed to go. Hallelujah. Now did you know the cut of the covenant, when you made Jesus Christ the Lord of your life your spirit man died. The sword of the spirit, the word of the living God cut your spirit man and every demon of hell can see it and every angel can see it. You're a covenant person. You're a covenant person. I said you are a covenant person and your badge is showing.

Now, the cut of the covenant in the old covenant of course was circumcision and I asked the Lord. I said, "Lord why did you do that like that"? He said, "There's pride in showing the covenant scar". He said, "I fixed it so that could not happen". There's not any way that's going to happen. He said, "The proof of my covenant is great prosperity and miracles". Now, to prove this out. You remember Isaac? Sowed in famine, reaped a 100 fold. Alright. Think about this. He went back in and opened up the wells of Abraham and he would dig a well, and it hit water, and they'd come take it away from him. He dug another well and hit water, they'd come take it away from him. Dug another well, and hit water, and so forth and so on.

Well, what was happening here? It was good that they were doing that because they were in famine and the blessing of the Lord was working on him. Amen? So, he hit water everywhere he went. They could dig right next to it and get dry holes. Well finally his estate, study the Chumash, his estate got bigger than the kings. And it said he was becoming wealthy by the day, more wealthy by the day, more wealthy by the day, and finally the king went and said, "Would you please leave? We can't afford you". He's got some jealousy going. Then what happened? Well he left. In the Chumash it says, "All the fruit trees dried up. They thought the famine was over, the blessing had just replaced it". Boy it was still there. It just came right back.

Now what happened? We need this guy back. We've got to have him. God's with him. God's with him. Covenant. That's the way they knew he had covenant with God not because of a scar. But now David and Jonathan had blood covenant. Amen? Jonathan was killed. David said and the Hebrew word is, "Chesed". David said, "Is there no one left? Is there no one left of Jonathan's family to who I may show chesed"? He was hurting to give. He was hurting to give to his covenant partner's family. This is the picture of God. This is a picture of Jesus. He's hurting to give to his covenant people and 99% of them don't know anything about it.

Well, they said, "Yes". There's a little fellow named Mephibosheth down there in Lo Debar when they heard that Saul and Jonathan had been killed. People had told lies and said, "David will kill you and eat your children". And they all ran from him. His nanny dropped him and killed him, they didn't kill him, she dropped him and what we would call today and he became paraplegic in his feet. I said it wrong, not paraplegic but injured and lame in his feet. And he's living off down there in Lo Debar and he's down below the bar in the slums and he sent an army down there to get him.

Miphibosheth must have thought, "Oh man he's going to have me for supper. David's after me". He brought him in, sat him down at his table. He said, "Who am I? I'm just a dog". He said, "No. No. No. No. No. No son. No. No. No. You sit at my table. You eat out of gold plates sonny boy". Now, he could have said, "You see that scar? Covenant". He hurt him to give and to meet this young man's needs. Suddenly this young man is a prince of the realm. What about Joseph? Put him in jail. I mean but he just kept coming to the top. He just kept coming to the top. Now, what did they say? "Oh it's obvious God is with him. It's obvious God is with him". They didn't need to see his scar. Hallelujah.

Oh I'm excited about it. I'm excited about it. Alright. The book of Matthew chapter six please, verse 24. "No man can serve two masters for either he will hate the one and love the other or else he'll hold to the one and despise the other. You can not serve God and mammon. Therefore, I say unto you take no thought for your life or quit worrying about your life. What you shall eat, or what you shall drink, or yet for your body, or what you shall put on. Is not the life more than meat and the body more than raiment? Behold the fowls of the air". Now keep covenant in mind here. "Behold the fowls of the air. They sow not, neither do they reap, nor gather into barns; yet your heavenly father feedeth them. Are you not much better than they? Which of you by taking thought can add one cubit unto their stature? Why take ye thought of raiment? Consider the lilies of the field how they grow. They toil not neither do they spin yet I say unto you that even..."

So, he said, "I took your book on the laws of prosperity and Ms. Gloria's book on God's will is prosperity". And he said, "I fasted, and prayed, and locked myself up with my Bible and those books". And partner morning we showed a video clip of him telling this but he was talking to me at about it. And he said, "The glory of God came in my room". And he said, "I learned that prosperity is a covenant".

Now, he looked me right in the face. Well, let me tell you this first. When I first met him he said, "Brother Copeland, the first phase of this is just complete and it cost 250 million dollars American. We built it debt free and with no American money". And they have started, they started what is now called the new Nigerian middle class. Amen. It is phenomenal. And he said, "Phase two is 250 million and the money's in the bank". I said, "Bishop I think the teacher needs to learn from the student". And I have, I've learned a lot from him. But now here is one of the biggest things that I ever learned from him. Year before last he just looked me right in the face. He said, "Brother Kenneth every word, every word is a blood backed word". And he said, "When I read seek ye first the kingdom of God and all these things shall be added unto you that's a blood statement".

The nation of Israel began with a covenant of blood, Abram. God called him aside. He said, "How shall I know", talking about having a son. And God said, "Look at all of the stars and so forth". But then he said, "Get for me animals", and he named what to get. He divided the animals down the spine. This is the Hebrew way of cutting covenant. You let the sides fall and the blood that falls on the ground then is the covenant blood. And when it got very dark then Abram saw this, the glory. He saw the glory of burning fire come walking in there between those animals. I'm totally convinced he saw his footprints. The fire was there he could see. And he walked the covenant walk which is in a figure eight which is the sign for infinity, forever. This is a financial covenant, and it's forever, it's forever.