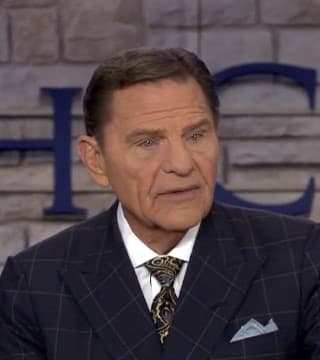 Now then, let's go to our golden text, which is Mark chapter 11, of course. And the 22nd verse. Mark 11:22, "Have faith in God". Well, Lord I've been prayin' for it. He didn't say pray for it, he said have it. Well, I've been hopin' for it. He didn't say hope for it, he said have it. Have it. Amen. He has made it available so have it. I was preaching in Little Rock, Arkansas, a number of years ago. On Sunday morning at the Agape Church, the pastor there, Happy and Jeanne Caldwell in those days. I woke about 4:00 that morning just wide awake. When I woke up, I didn't sit up in the bed but my head just went forward like that.

Now, it wasn't an open vision, it was a spiritual vision. But I saw Jesus right there at the end of my bed, and he was standing there like this as far as his arms would reach, and he had this huge serving tray. It was silver, serving tray. Beautiful thing just heaped with cookies and he was not smiling. I thought, you know, "Somebody with a big tray full of cookies ought to be smiling". He wasn't frowning but he was very stern. He said, "Kenneth, have a cookie". "Okay". Is that what I'm supposed to say? But see what he said? He didn't say, "Kenneth, do you want a cookie"? He said, "Have one".

I think it's very interesting the way the NIV translates that. "Believe you have received them and you will have them". Some people look at that as believing I'm going to receive. Nope, nope, nope. That pushed it off into the future, I'm going to never gets there. That's hope without faith. Faith is the substance of things hoped for. Hope is out there in the future, see. He's gonna heal me someday. Someday never comes. So I believe I have received them and I will have them. Praise God. You have to believe it before you have it in order to have it. Amen. And, "When you stand praying, forgive, if you have odd against any; that your Father also which is in heaven may forgive you your trespasses".

Now, the first fundamental of faith, the very bed rock first fundamental, believe it your heart then say it with your mouth. Now, we read a number of scriptures, including Mark 11:23. Romans 10:10, "With the heart man believes unto righteous; and with the mouth confession is made unto salvation". 2 Corinthians 4:13, "We have believed, therefore have we spoken". In Matthew 12:37, "We're justified with the words of our mouth, and condemned with the words of our mouth". Praise God. So words. Then, we looked at the 91st Psalm in the second verse, "They that dwell in the secret place of the most high abide under the shadow of the all mighty". Well, how do you get in there? I will say, I will say of the Lord He is... huh? Come on, help me. He is my God. He's my fortress. In Him, I do trust, I will trust. Then, surely He'll deliver me. Nothing happens until you say it. Amen. And then, that is number one.

Now, you look in the mirror all the time. You looked in the mirror today. It's obviously. I mean, your shirt's buttoned straight. I mean, you know. But unless you've been in one of our services before, because this is the best illustration of this that I've been able to come up with so far, you have no idea how long your nose is. You know why you don't? You never measured it. The reason you've never measured it is because you never even thought about it and you didn't how long the thing is to start with. But now, if you treat the Bible like that, like a lot of people do, that's the reason you're not receiving anything that the word says. You're not walking in the liberty and the freedom of the word of God. Why? Because you're reading it just the same way you look into the mirror. It's just a little surface need without a decision to find out. I go into this book, glory to God, and it is first place in my life, it is final authority in the life of our household. Glory to God. Hallelujah. Praise God. It becomes alive, it becomes a living thing. Amen. Praise God.

So now, I want you to notice what he says here, what the Spirit of God said through our Brother, James, in the second chapter, verse 15. Excuse me, let's read 14. "What doth it profit, my brethren, though a man say he have faith, and have not works"? Now, let's read that, and have not corresponding action. "Can faith save him"? He's not talking about salvation there. "If a brother or sister be naked, and destitute of daily food, And one of you say unto them, Depart in peace, be ye warmed and filled; notwithstanding you give them not those things which are needful to the body; what does it profit? Even so faith, if it has not corresponding action, is dead being alone". You need to be talking, and thinking, and acting as though the Bible is absolutely true. When it says, "By His stripes ye were healed," then praise God you were.

It didn't say you're gonna be. No, you were. You can just start tracking through the... let me show you something. You may have already noticed all these tabs that I have in my Bible. Those are healing scriptures starting in the book of Genesis. You can just sit down and feed your spirit on these healing verses, praise God. And just go all the way through them and wind up in the book of Revelation. Glory to God, hallelujah. What are you doing? You're attending to His word. Amen. Proverbs 4:20, you're attending to His word. What does it mean, attend to my word? You attend to this. You stop me on the street and say, "Brother Copeland, can we visit a minute"? "Can I call you later, I've got an appointment down here that I must attend to".

Now, in Texas we tend to it. We don't attend to things, we tend to them. Amen. It isn't that I don't want to spend time with you, but I have something that's more pressing, more important, and what is more important than this because this is where your faith comes from. Hallelujah. Praise God. That makes the connection to everything you need and every victory you can possibly dream of is right here. Thank you, Lord Jesus. "Incline thine ear unto my sayings". Incline means to lean. I lean toward what He says because what He says is true. Whether I like to hear it or not, that's the truth about the situation, so I incline my ear toward that. Now, the more you do that, the more you're inclined to think that way instead of thinking like the world and saying, "I don't understand that, that couldn't amount to much".

I want to say something to you here, I've noticed this over the years that the things that I think don't amount to much turn out being big to God. And the things that I thought were just huge, don't amount to a whole lot in His sight. Amen. Because of the way that lived our lives, almost all carnal thinking. Being carnally minded is death, and that's the reason why. The things that important to the carnal mind have very little importance when it comes to the real things, which is the spiritual things of life. That's where the power is, is in the realm of the Spirit.

Now then, I want to show you something else concerning corresponding action. Turn with me to the book of Joshua. Thank you, Lord Jesus. One of the difficult things in the faith life is obedience to His commands. I'm talking about the things that He leads us to do. Something has come along here, and you're supposed to be doing that, and you knew it. But I don't know, I can't do that. It gets to be a lot of pressure about it. But finally kind of lets up and you just, but it's just nagging at you, just hanging in there, just nagging at you, just, well, why, you know. You just keep ignoring it long enough, and it will go away, you won't even think about it anymore. But I want you to know you gotta dog hounding your house because of disobedience. Even if you did go ahead and do it but you hated every second of it, that's obedience but not willing. And He said, "If you be willing and obedient, you eat the good of the land".

So, I want to show you a situation here. I have heard of just very little, very little preaching about this, and it is just huge. Joshua chapter two. Now, you know the story. Joshua sent two spies, not twelve. Boy, he learned that lesson the hard way, didn't he? He and Caleb are the only one left. Let's begin reading in verse eight, "Before they were laid down, she up unto them upon the roof; And she said unto the men, I know that the Lord hath given you the land, and that your terror is fallen upon us, that all the inhabitants of the land faint because of you". Now, remember, remember, they went into the land, spied out the land, and they came back with these amazing, these amazing grapes of big, it took two men to carry them. Did you recognize it never mentions that anymore? Something's going on here.

Now, look at it. "We heard how the Lord dried up the water of the Red sea for you, when you came out of Egypt; and what you did to the two kings of the Amorites, that were on the other side of Jordan. You utterly destroyed them. And as soon as we had heard these things, our hearts did melt, neither did there remain anymore courage in any man because of you: for the Lord your God, he is God in heaven above, and in the earth beneath.'" This is such vital information. They could have walked across that Jordan, walked right in there just like Schwarzkopf walked across Iraq. They were people in the Iraqis army that was surrendering to helicopters. Helicopter come up, and they just surrender to anything. They wanted out of this mess so bad it was the great Saddam Hussein mouth that said this is gonna be the mother of all battles. Well, it was but the mother, it was a different mother. Amen.

That's kind of like Goliath said it, then David said it. David had the last word because he acted on it. It was he said that killed that giant. He said, "I come at you in the name, I come at you in the name of the Lord God". He recognized his covenant with God and he said, "This uncircumcised Philistine is no different in my mind or in my sight than that lion and that bear". He's saying to the king, he's saying to Saul, "I couldn't kill a lion, I couldn't kill a bear, but because I'm in covenant with God, my covenant with God empowered, or anointed me, to kill the lion and kill the bear. And I slew both of them with my bare hands, and I'll go kill him the same way". He was ready to act so what happened? He believed in his heart, said it with his mouth, went out and did it. Those are the basic fundamentals but they must be based on the Word.