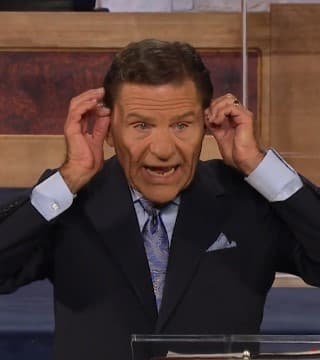 Faith begins where the will of God is known. The Word of God is the will of God. Now wouldn't it be, well, it is just unthinkable that God would promise you or me something that was not his will for you to have? Duh. Thank you, Lord. Well I'm just so unworthy. Oh, shut up. God didn't create any new, unworthy creatures. You're a new creature. Any man that is in Christ, any person that is in Christ is a new creature. Old things passed away. All things became new and all things were of God, but you're so unworthy. We have a saying in Texas for that. Bull. The second fundamental of faith is to act on your faith or act on the Word.

Now, let's go over to James chapter 1. James chapter 1. We'll look at verse 22. Now remember James is the oldest book in the New Testament. James, Jesus' half brother, same mother, different fathers. And look, 22nd verse, chapter one, "Be ye doers of the Word and not hearers only, deceiving your own self for if any, be a hearer of the Word and not a doer, he is like unto a man beholding his natural face in a glass. For he beholdeth himself, goeth his way, straightaway forgeteth what manner of man he was. Now look at 25. "Who so looketh of into the perfect law of liberty". Oh no. The perfect law of liberty. "You shall know the truth and the truth will make make you perfect law". Hallelujah. Thank you Lord Jesus. Now, "He beholds himself and goes his way and forgets what manner of man he was".

Now I've said this many, many, many times, but the Lord gave it to him and it's the best illustration of it that I know, or at least I know I do stuff. Everybody in this room looked in a mirror today. Everybody. So tell me how long your nose is, how long are your ears? How wide are your eyes? Don't know unless you've measured it. Some of you going to go home tonight and measure your nose. Mine's just over two inches long and about two and an eighth, something like that. I thought I better measure it because I'll go out. Say this all the time. Now, here's the reason. Here's the reason you don't know. You didn't decide to know. Yes. Then this is what he's talking about.

When you go to the Word reading it without having made the decision, I'm going to act on this. You lay your Bible down. You don't even remember what it says. You go to church and, boy I'll tell you, my spiritual father, Oral Roberts, Woo. If you walked up to, Clyde, if I walked up to him and I said, "Brother Roberts," and I did this man, once. I said, "Brother Roberts, that sure was good". He said, "What was good about it? What'd you hear"? Ah. Well, I don't know. But it sure was good. Oh, yeah. But you see the importance? Oh, wasn't it wonderful? What did he say? I don't know. Why? You didn't intend to find out. You just shut down and said, Ooh, and ah and oh, good. And few goosebumps and that was about the end of it. That's not good enough. Because faith cometh by hearing and hearing by the Word of God.

Now her parents and the Hagins were very good friends because they had preached in her dad's church. And then she and her husband were in the ministry, so they all knew one another quite well. Well, Brother Hagin, laid hands on her in the healing line. So she's acting, she's putting corresponding action to her faith. So she took her glasses off and she can't see. She tried to drive. Well, now in the first place it's illegal because she can't drive a car legally without her glasses on. Days later they were having dinner with the Hagins and she said, and she's sitting there without her glasses on. Brother Hagin said you'd look at her one minute and her eyes were crossed, and you'd look back at her and one of them going one way and the other going the other. And he said, "You can hardly look at her". It just marred her looks so badly. He said it was just terrible. She said, "Brother Hagin, what am I going to do"? She said, "I'm just liable to run up on the curb or anything else, driving my children to school". He said, "Put your glasses back on".

Well, a couple of years or so later, they were in their neighborhood, so they went by to see them and they noticed she did not have on her glasses. And they said, "What happened"? "Well," she said, "I practiced what you told me religiously for six months, and if there was any difference in my eyes, I couldn't tell it. That's where most people would have quit. Well, what's the difference? I'm done, all right, with these glasses". Fundamentals. Practice, practice. Don't ever give up. If you're willing to stay there forever, you won't be there very long. So she said, "I just kept on. I just kept on". And she said, "After three months I began to see some difference. They began to change". She said, "At the end of three more months," nine months, she said, "I had 20/20 vision in both eyes". She said, "I went to the doctor and had my driver's license changed". Perfectly well.

Now then, faith without corresponding action is Perfectly well. Now then, faith without corresponding action is dead. Now, I want to close this tonight. In the fifth chapter of Mark. Mark chapter five, the woman that was healed of the issue of blood. "A certain woman which had an issue of blood 12 years, had suffered many things of many physicians, spent all that she had with nothing better, but rather grew worse. When she had heard of Jesus, came in the press behind and touched his garment for she said". For she said. For she said. Did you get that? "For she said, 'if I may touch but his clothes, I shall be whole.' Straightway the fountain of her blood was dried up and she felt in her body she was healed".

She didn't feel it til she believed it, and then she believed it, received it, and then felt it. "Jesus immediately knowing in himself that virtue or power had gone out of him, turned him about in the press and said, 'who touched my clothes?' His disciples said unto him, 'Thou seest the multitude and throng and then sayest who touched me.' He looked around about see her that had done this thing, but the woman fearing and trembling, knowing what was done in her came and fell down before him and told him all the truth. And he said unto her 'Daughter, thy faith has made thee whole go in peace and be whole of thy plague".

Now she heard, what did she hear? Had to be the Word because faith came. Had to be the Word. Faith came. Faith came. She heard. She said, "Oh, thank God for BVOVN. My goodness. I'm telling you. Like I said, like I said while ago, I've been preaching the same message for 50 years and I just flipped on BVOVN on Sunday. And there was Mark and Trina Hankins preaching on Mark 11:23. Glory to God. Oh Man. And he brought up the fact that now there's two different Greek Words translated say. And the one she said is translated lego. She kept saying. She kept saying, you know what she's doing? Building faith. Lego blocks. Lego blocks. Lego blocks. Think about the little blocks. You know what I'm saying. Yeah. She's building her faith. She kept saying, "Well, Brother Copeland, you won't be heard for you much saying".

Well, there's a certain amount of pride to that. Young man flew the airplane over there. I'm just sitting there in my office, looking at that telephone. Ring. He came in. Somebody picked him up at the airport and brought him to my office. He's sitting there. I called Jack. And I said, "Jack. Hi. This is really bothering me". But I said, "I won't fly it. I will not touch that airplane until that other 25.000 comes in". "Well, Kenneth," he said, "that's fine". He said, "That's good". But he said, "Brother, I don't care". So I hung up. This young man said, "Mr. Copeland". And there was more conversation than that. I won't go into it all the way. He said, "I never heard anything like that before". He said, and he asked me why. And I went into scriptures and things.

He said, "I've never known anybody with that kind of a commitment to the Lord Jesus". He said, "Oh, and would you pray with me"? He said, "I want to know him like that. I want him. I want him to know him". He got born again that day wound up quitting his job, went in the mission field, glory to God. Hallelujah. And he's in heaven today. And I said, glory to God, I'll roll that 25.000 over on you. I could care less when it comes. Two weeks. It just come up just bouncing in there. But I had a get off of my much saying trying to make it happen. You don't make faith happen. You let it happen. I receive. Say it. I believe. I receive.