Kenneth Copeland - The Seed Faith Of Your Words 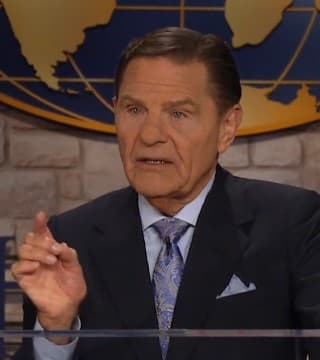 Jesus said in Mark 11:22, "Jesus answering saith unto them, 'Have faith in God.;" The cross reference says "Have the faith of God". That is very, very accurate, because we're born again not of corruptible seed, but incorruptible by the Word of God which liveth and abideth forever. "Faith cometh by hearing and hearing by the Word of God that our faith,..." When we got born again we got born again by faith. The faith, God's faith is in the seed of His Word. I'm already happy. Glory to God. So, the moment you got born again, and that moment you received Jesus as your Lord and Savior, I mean you got saved with that faith. It didn't go anywhere.

People say, "Well, Brother Copeland, I just don't have faith". Well, get saved you'll have faith. Have faith in God. "For verily I say unto you, that whosoever..." So, this will work for anybody, right? "...whosoever shall say unto this mountain, 'Be thou removed; Be thou cast into the sea,' and shall not doubt in his heart," shall not doubt in the inner man, "but shall believe that those things," those words "which he saith shall come to pass; he shall have whatsoever he saith. Therefore, I say unto you, what things soever you desire, when you pray, believe that you receive them, and you shall have them. And, when you stand praying forgive if you have ought against any, that your Father also, which is in Heaven, may forgive you your trespasses".

Don't ever quit. I said don't ever quit. Don't ever turn loose of your faith. Don't ever change your confession. I mean, you put the Word of God in your heart and your mouth and don't ever say anything else. I don't care what the pain's doing, I've been there. I've been there. I know what it's like. I'm telling you, Glory to God, don't quit. I'm not moved by what I see; I'm not moved by what I feel; I'm moved only by what I believe, and I have faith in God. Amen. Hey, hallelujah. Thank you, Jesus. Glory be to God. So, fundamental number one. Believe it in your heart, then say it with your mouth. We read Mark 11:23. Let's go to 2 Corinthians 4:13. Oh, I love it. 2 Corinthians chapter 4 and the 13th verse. "We, having the same spirit of faith, according as it is written I believed and, therefore, have I spoken. We also believe and, therefore, speak".

Now, let's go to Romans 10:10. Now in the 10th chapter of Romans, in the 8th verse, "But what saith it? The Word is nigh thee, even in thy mouth, and in thy heart: that is, the Word of Faith, which we preach". That's where that phrase comes from. This Word, this Bible, this book is the Word of Faith. Faith is not a movement. Glory to God. It's not some kind of, you know, no, no, no, no, no. No. Now, Romans 10:10, "For with the heart man believeth unto righteousness, and with the mouth confession is made unto salvation". Luke chapter 6, and we'll begin reading with the 43rd verse. Luke 6:43. "For a good tree bringeth not forth corrupt fruit; neither doth a corrupt tree bring forth good fruit. Every tree is known by his own fruit, for of thorns men do not gather figs, nor of bramble bush do they gather grapes. A good man, out of the good treasure of his heart, bringeth forth that which is good. An evil man..."

Now, stop there just a moment. He's not talking about a good man and a murderer. The word evil in the King James translation kind of leaves that, but you remember also in the book of Hebrews it calls unbelieving heart an evil heart, a wicked heart. So, you see what Jesus is talking about; He could be talking about two Christians. This is what He is referring to. So, they're not bad people, but one is putting one thing in his heart and another is putting in something else. So now look at it that way, and look at it again. A good man, out of the good deposit of his heart, bringeth forth that which is good, and an evil, or an unbelieving, man, out of the evil deposit of his heart, bringeth forth that which is evil.

So, whatever you put in the is what you're gonna get out. Amen. Whatever you're listening to; wherever your eyes are going... You know, the computer world... Junk in, junk out. You can't change that. That is a spiritual law. You cannot keep sowing and saying the same thing and someday expect to get different results. Now, look at this very carefully now and take it to heart. Take this to heart. "A good man, out of the good treasure of his heart, bringeth forth that which is good. An evil man, out of the evil treasure of his heart, bringeth forth that which is evil, for of the abundance of the heart his mouth speaks". There it is. Go through your New Testament, look at the times that Jesus used His words as a tool. "I say unto you, arise. I say unto you".

Remember He said that to Jairus' daughter. "I say unto you, arise". He used His Word. "Take up your bed and walk". Words, faith-filled words. Words never were, and still are not, primarily for communication. Words primarily are power release. Yeah. Oh Glory to God. Thank you, Jesus. Go to the eleventh chapter of the book of Hebrews. We live in a word-created, faith-created Universe. Now, faith is the substance of things hoped for, the evidence of things not seen, evidence of things you can't see. Say, "Can't see". Faith is an invisible force. It cannot be felt with the flesh. Now, you can feel the results of it sometimes, but it's a spiritual force. You can't feel spiritual forces. It's like the wind, you can't see the wind, but you can feel the effect of it. You still can't see it.

Well faith, spiritual things, are like that. If the elders obtained a good report, through faith we understand that the world's were framed by the Word of God so that things, matter, material things... God created all matter. There was a time there was nothing material. All matter was created by faith-filled words. Amen. Glory to God. Think about it. Now, so that things which are seen were not made of things which do appear. All matter was not created out of nothing; it was created out of something you can't see or feel; it was created by faith. Glory to God.

Go back to Mark 11:23. There it is again. "Whosoever shall say unto this mountain, 'Be thou removed, and be thou cast into the sea,' and shall not doubt in his heart, but believe that those things which he saith shall come to pass, he shall have whatsoever he saith". Now go over to the 12th chapter of the book of Romans. Romans chapter 12, verse 3. "For I say, through the grace given unto me, to every man that is among you not to think of himself more highly than he ought to think, but to think soberly, according as God has dealt to every man the measure of faith". Now, He has not dealt to every man alive the measure of faith.

Now, every man, every human being alive, has faith. It's part of the human spirit, but it's not the faith of God. You have to have human faith. I mean you got to believe something. You'd get run over in the street if you don't believe that thing will kill you. That's human faith. That's natural human faith. But, Adam's faith was twisted 180 degrees. His faith turned to fear. Fear is faith in something's ability to hurt you. Fear is faith that a storm can kill you and begins to believe that it will. It's faith; it's twisted 180 degrees. So, you remember faith cometh by hearing, hearing by the Word of God. What happened after Adam fell? What happened when he heard God? He ran instead of coming, just ran the other way. He ran instead of coming to Him. He was afraid of Him because he's no longer connected to Him.

Some people do nothing. Oh ye of little faith. Oh ye of no faith. I've not seen such great faith in all of Israel. Of whom did he say that? The man that needed no other evidence but the Word. None. He just said, "Sir, come ere my son die". Jesus said, "Go your way, thy son liveth". "Yes, sir, I'm going. I'm going. My boy's alive. Glory to God. Ain't no way he can die. Ain't no way he can die because that water turned to wine; there ain't no way my boy's gonna die". Yeah. Whoo. Man, that boy going fishing tomorrow. Thank you, Jesus. Glory be to God. Hallelujah. Say this, "I have a measure of the same faith that put the stars in the heavens, and created all things". All matter was created by faith-filled words. Faith-filled words dominate the laws of sin and death. God's faith is in the seed of His Word. Words are power release.