Kenneth Copeland - Jesus Made You Rich 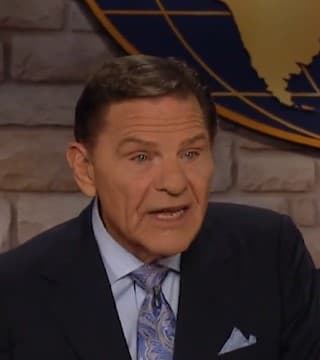 Let's look at some things here in Mark 10 from the beginning of the 17th verse. When he was gone forth into the way, there came one running, and kneeled to him, and asked him, "Good Master, what shall I do that I may inherit eternal life"? Jesus said unto him, "Why callest thou me good? There is none good but one, that is, God. Knowest thou the commandments, Do not commit adultery, Do not kill, Do not steal, Do not bear false witness, Defraud not, Honor thy father and mother". And he answered unto him, "Master, all these have I observed from my youth". Jesus beholding him loved him, and said unto him, "One thing thou lackest: go thy way, sell whatever thou hast, and give to the poor, and thou shalt have treasure in heaven: come, take up the cross, and follow me". And he was sad at that saying, and went away grieved: for he had great possessions. Jesus looked round about, and...

And they were astonished out of measure, saying among themselves, "Who then can be saved"? Every man he had was wealthy before he picked them. John and James, sons of Zebedee in the fishing business. Peter and Andrew, Matthew, oh yeah what about Matthew, yeah he's a tax collector brother. That's the reason they hated tax collectors, because they skimming. "You mean Jesus picked a man like that"? Well yeah he picked you didn't he? "But I never done anything like that," well you haven't quit lying have you? This is one of them nights I can already tell. They were astonished out of measure.

Now notice this, they were in the house, his disciples asked him again and so forth. So they had just come from the house, his very large home, and they're looking at him and they're thinking, "What? What is this"? Oh I love it. They were astonished out of measure saying among themselves, they didn't say it to him. They said, "Which one of us could even be saved? We got too much money. And besides that, he wouldn't let us even bring any with us. But we've got riches since we've been with him then we were when we started out this thing". He said, "When I told you not to bring anything, did you lack anything"? They said, "No Lord, we lack nothing".

Let me remind of something else. You remember he said, "Sell one of your garments and buy a sword". Can you see somebody selling a garment that's the only one you had for three and a half years? Had to be some pretty nice clothes. If you could sell it. Are you here? You know, amen is allowed. Some of you thinking, "Boy he's off of it tonight. Listen to him talking about rich disciples". Jesus, the only time he became poor was when he went to the cross and bore our poverty. He became poor so that we might become rich. Rich r-i-c-h, rich is a bible word. Amen.

Let me tell you something the Lord said to me, this will help you. Years ago, the Lord said to me, now I've never heard the audible voice of the Lord, I'm open Lord. That same still small voice of your spirit that every born again person has, and anyone can hear it, but you have to develop it, you have to listen for it, you have to be quiet sometimes. Amen. I doubt very very seriously if you're going to learn much about hearing the voice of the Lord driving down the freeway listening to whatever that junk is you listen to on the freeway. Don't be doing that. Amen. Be listening to the Word. You got a phone with an app that'll play the scripture to you, download it, praise God. That's what that thing's for. Boy you don't have any excuse today.

Gloria and I go to bed and listen to Brother Hagen every night on the phone. Oh yeah, yeah. I put the IPad up one night 'cause there was some service there that I wanted to see that he preached. And so I had the Ipad up there in the middle of the bed between the two of us, and we were laying there watching, he began to give the invitation. Well since she and I was already saved, I turned it off. But it was still on. I leaned over there to kiss her good night, she said, "Not in front of Brother Hagen". Hallelujah. You develop hearing the voice of the Lord by reading scripture, you know what you have to have to be scriptural? Scriptures.

For instance, go to the 10th chapter of John, my sheep know my voice, they hear my voice, they follow me. Read that, look at that, put it in your eyes, put it in your mouth, say it with your mouth, get it in your ears, get it down in your heart. I hear the voice of the spirit of God. I hear my Shepard's voice, I hear the great physician's voice, I hear him all the time, because you see he's speaking all the time, you and I've just been so spiritually dense, we weren't hearing it. But practice his presence, practice it and listen, listen, listen, listen, just listen. Lord you got something to say?

The night before I was to register the next day at ORU, scripturally illiterate. Like Gloria said, I was the oldest freshman in the world, 30 years old, I had just turned 30. Boy I remember 30 that was good. Wasn't near as good as 81. I wouldn't go back to being that stupid again for anybody. Not when I'm just as strong now as I was then, well almost I'm getting there. I told Gloria I said, "I don't know what to do here. I could go to the airport and get me a job, but if I get me a job I can't go to school. And I haven't got any money, what are we gonna do Gloria. I'll tell you what, I'm just gonna go in the bedroom there and I don't care if this takes all night long, I'm just gonna obey in there and pray in the spirit. I don't know what else to do".

So I went in there and just fell on the floor and went to praying just as hard and fast as I could in tongues. And I stopped and I thought, "I wonder if I just be quiet here, he'd say something". And it was not that still small voice, it was that still loud voice. "Well it's about time. I haven't been able to get a word in edge wise. Get up on your feet"! Man I jumped up on my feet. He said, "I sent you here, and I'll take care of you here". And he had some other things to say about the ministry. I walked about, I said, "Glory to God"! She said, "What happened to all night long? You ain't been in there but 20 minutes". I said, "I didn't need to be in there no more than 20 minutes, glory to God I got my answer," hallelujah. Thank you Lord.

Father we thank you tonight for your Word Lord Jesus, we're just so thrilled to hear these things, to know these things. You looked at that rich young ruler and loved him, money and all. Hallelujah. And we are so blessed that you've revealed these things to us. We no longer have to be laboring under just barely enough, just living from paycheck to paycheck, know everybody in the world nearly, but we can be debt free. Oh yeah, thank you Lord for reminding me, I said I was gonna tell you something that really helped me back in the early years.

The Lord said to me, he said, "Kenneth I can't advance your ministry any further". I said, "Why"? He said, "You're too high tempered. Somebody says anything ugly about you, it makes you wanna fight". Now here's what he was talking to me about, is don't hear that. He said, "Don't read anything about yourself in print again ever, good or bad. It takes too long to get the bad stuff outta your mind," and I'd just go to that never ending thing that just goes on and on and on and on, and you have to get rid of it. And he said, "You don't try to get rid of the good stuff, and it's more dangerous than the bad. You get to believing all that good stuff people say and write about you. Don't touch it".

Well I went through crisis after crisis and didn't know it was on. If you'll roll all that care over on Jesus, he'll turn it around for you. Don't pay any attention to what people say about you. Amen. They talking ugly about you anyway. Name it, claim it, blab it, grab it. Oh yeah. I named it, claimed it, blabbed it, grabbed it, and that's the reason I still got it, hallelujah.