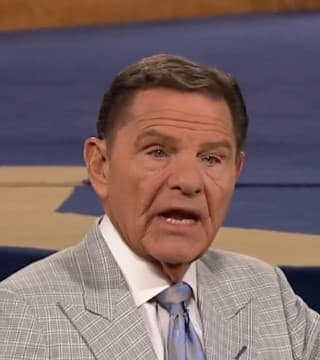 Now, let's go over to 1 John. Turn with me to the fourth chapter. Now all this has, all this is part of the basic fundamentals of faith. In chapter 4, and let's begin reading, well let's begin reading with the 10th verse. "Herein is love. Not that we love God but that he loved us, and sent his Son to be the propitiation of the sacrifice for our sins. Beloved, if God so loved us, we ought also to love one another. No man has seen God at any time. If we love one another, God dwelleth in us and his love is perfected in us. Hereby, know we that we dwell in him, and he in us because he hath given us of his Spirit. And we have seen and do testify that the Father sent the Son to be the savior of the world. Whosoever shall confess that Jesus is the Son of God, God dwelleth in him and he in God. And we have known," here's what I wanted you to get.

"We have known," that word known in gnosko. Very intimate, to know. "We have known and believed the love that God had to us". Every believer, every person, when you made Jesus Christ the Lord of your life, amen, you got born again. You were, you became a new creature. Old things passed away and all things became new and all things were of God. At that moment, that was the most intimate moment you will ever know of God on this side of heaven. Oh, my. You know him. You're not just acquainted with him. You know him. You're known of him. That's precious. But what about the believing the love? Ah, not so much.

Oh I know. We can run a poll in here this morning. We'd get 100% result. Every single one, do you believe God loves you? Oh yes, man. Yes. Oh yes. Oh yes. Oh yes. "I don't understand. I just don't understand how you could let this come on my family". Really? What happened in the wilderness? They did not believe he loved them. They did not. His own staff had no revelation of that. In the middle of that storm, woke him up and said, "Don't you care"? Don't ever, ever, ever, don't ever, ever, ever heed to the temptation to say that. You just slap the water out of yourself before you say that. I mean physically. Just whop yourself upside the head. Just don't ever be saying that. No sir. No sir. I will not, I will not allow that to come through my lips.

Now in closing this today, let's go over to the gospel of John, the 14th chapter. We have found out how powerful words are. Words are the most powerful and the most important things on this planet. Jesus said, in the 10th verse of the 14th chapter of John, "Believest thou not that I am in the Father and the Father in me? The words that I speak unto you, I speak not of myself, but the Father that dwelleth in me, he doeth the works". Now you remember in John 6:63, he said "The words that I speak unto you are Spirit and they are life". Now he never spoke any death words. Every word he said came first from the Father. Then out his mouth, they were words of life. All words in some form or another are Spirit. Even flesh words are spiritual in nature. Amen. Now, 18th chapter of the book of Proverbs says that the power of death and life are in the tongue.

Now see, Jesus using that law but he never spoke the death side. He said the words that I speak unto you, let's look at it again. The way it's worded is very important. "Believest thou not that I'm in the Father and the Father in me? The words that I speak unto you, I speak not of myself". Now we could summarize like this. You could go to the 8th chapter of John and so forth and so on, and particularly when he said the Son can do nothing of himself. Jesus literally said, "I only say what I hear my Father say, and I only do what I see my Father do".

Oh how important this is. The Spirit of God gave that woman with the issue of blood the words to say. She didn't make them up. Jairus said exactly to Jesus what the Spirit of God put in his heart and mouth to say and he never ever said another word until that girl was raised up. He never said another word. Even when they came up and told him, "You're daughter's dead. Forget it". He never said another word. I can give you an illustration that people praying for family members. Oh, God save Uncle Fred. Oh God save Aunt Minnie. Oh God save my child. Save my child. You have not prayed anything yet. In the first place, he's already done everything that it takes for your baby to get saved. He did his part. He went to the cross, shed the blood and the gift of God is eternal life. It is a gift. Amen. And it's ready.

Well now, what should I be praying? I learned this from Brother Hagin, and I've seen it work so many times. So many times. You, do you remember what the word said? If you're going to spoil a strong man's house, first bind him. Don't try to go around banging around in the devil's house until you bind him. Bind him up. Now listen to what Jesus said. "Whatsoever you bind on earth is bound in heaven". Until you bind on earth, there's not anything heaven can do about the binding, because the earth and the fullness therein, has been given to men. The authority is here. Jesus gave that authority and right before he left, he turned it over to his body. You cast out the devil. You lay hands on the sick and they'll recover. All authority has been given unto me, both in heaven and earth. Therefore, you go and take my name. No other name under heaven, given unto men. It's in the hands of men.

So before you going to spoil a strong man's house, bind him. You spirit, operating in the life of my son, my daughter, my dad, my mother, whomever. You, I adjure you in the name of Jesus Christ whose I am and whom I serve. You desist today. Stop today. Stop it right now. You stop, in his life. Trying to keep him out of the kingdom of God. I bind you. You're done. Now don't start trying to go on your feelings. James 4:7. You submitted yourself to God. Then you resisted the devil. Far as you're concerned, he's fled. Now we're not done yet. Pray ye the Lord of the harvest, send laborers into the field.

Now see, she hadn't gotten into the, where Peter in 1 Peter 5:6-10, "Humble yourself under the mighty hand of God, casting all your care over on him". That's true Bible humility. Casting your care over on him. The Amplified says, "Once and for all". Your cares, anxieties, worries, concerns. "For he cares for you, and he will exult you in due time. He will establish you. He will strengthen you". Well, she wasn't acting specifically on that scripture but the Spirit of God was leading her in that direction. She walked through the kitchen and threw her Bible down on the kitchen table. She said, "Lord, if he goes to hell it's your fault. I'm not praying for him anymore".

I said I'd close with that, but I'm going to close with this. I believe this will help you. Sit down and write down all of your cares. The worries of your life. The things that you don't have any business carrying around with you. Well, Lord if you just take half of them, I believe I can carry the other half. That ain't nothing but pride. You can't carry none of them. You weren't created to carry cares. You were created to be carefree. Write them down. Write each one of them down on a piece of paper. Prepare the communion elements. Take communion, and say, "Lord I judge myself of each one of these. I'm rolling the care of this over on you".

I gave you some scriptures this morning about praying for your kinfolks. First bind the strongman. Well that's a scripture. Find the scriptures. They cover every one of those cares, amen. Then cast them all over on Jesus. Judge it, praise God. Now you can do this if you want to. I made a quality decision. A quality decision is one about which there's no more argument and from which there is no more retreat. That's my decision. I said, "Lord, you help me now. With your help, and you wake me up if I get over into picking up this care, any worry, anytime, anymore. I'm holding you responsible to put it into my thinking, remind me of it. I refuse to let the sun go down on care in my life". I'm not going to carry care anymore.