Kenneth Copeland - Develop Your Born-Again Spirit By Refusing To Budge 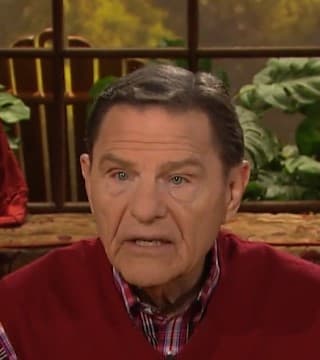 Hello everybody, welcome to Tuesday's edition of the Believers Voice of Victory broadcast. And we're all so excited here in this studio... You'll catch up. Amen.

Hallelujah. Come on, give the Lord a praise this morning. Thank you Lord Jesus. Thank you Lord. Whoa. Somebody just got healed of a very, very bad cough. It's one of those kind of coughs that are so hard, and so strong that you're concerned about maybe breaking a rib, coughing so hard. You're healed. Jesus has healed you. Well, he healed you 2.000 years ago. Hallelujah. And you just received it. Come on, give the Lord praise. Hallelujah. Hallelujah. Oh, I'm telling you this, whoa. Glory to God. It's working. He's working.

Say it, "Greater is He that is in me, than he that is in the world. Cancer, you're a name, bow your knee to the mighty name of Jesus. Flu, you're a name, and it's not my family name. I've been named after my Father God. You're a name, flu. I break your power. Get out of my body. This is my body. It belongs to me and to Jesus. It doesn't have any business with the flu".

I heard Gloria say this one time. She said, "We don't have anymore business with sickness in our body than we do with sin". He bore our sins, and he bore our sickness. On the same day, on the same cross. Oh, that's shouting ground this morning. Glory to God. Hallelujah. And last week, and we continue again this week on the subject developing and training the born again human spirit. Very, very important. Very, very doable. And very, very, very productive for your life. I'm learning at my age, I turned 82 last December, and I'm learning, and even back when I was in school, and athletics, and you know, I was a athlete ever since I could remember.

Well, I noticed when I... And I'm not just walking. I'm in a training program. I have a trainer, and so forth and so on. And I love it. But you know, it was my responsibility to say that first? Because I always said I hated it. But you say something long enough until it gets down in your heart, it will control your life. And that was controlling me, and created more distaste and more hate for exercise. And it's something God told me to do. That may be the question, how dumb can you get? I don't know, but it cost me a lot of pain for a lot of years. And I sit before you this morning, completely pain free in my body. Pray to God! Hallelujah. Going for 120. Hallelujah.

Now, the developing of a human spirit is more important than the developing of the body or the mind. But, by my being disobedient where my body was concerned, was causing me a lot of problems spiritually. Because I was dealing with pain all the time. And I refuse, in the name of Jesus, to deal with it any other way except what's available to me, in the Word of God. Now, I'm not against medical science. And I have partaken of medical science. Glory to God. But the thing that I'm saying to you is if I had listened to God in the first place, and developed this physical body, my, my. But it's never too late. It's never too late to start developing your spirit. And that's what we're dealing with in these sessions.

An actor of the Word from James chapter 1, verse 22. Have to look at that. Becoming a doer of the Word, and not here as only deceiving your own selves, for if him to be a hearer of the Word, he's not a doer, and not a doer. He's like a man beholding himself in his natural face in a glass. He beholdeth himself, goes his way, and straight way, immediately, forgets what manner of man he was, or what he saw, but who so looketh into the perfect law of liberty? Now that's the Word of God. And continueht therein, stay in the Word. He being not a forgetful hearer, but a doer, an actor.

Now, you remember what we said about that last week? The only reason you don't remember what your face looks like, is because you didn't make a decision to find out something in detail. And we used the illustration about how long is your nose? Well, 99% of the people couldn't tell you. Well, it's about like that, I guess. But why? You never made any decision to find out. Had you made a decision, and measured it, and measured it, wrote it down, for whatever reason, you would remember it. People read the Bible all their life and never make a decision to act on what they read. "Well, Brother Copeland, I know the Bible says that, buuuuut".

Well, everything after "buuuuut" is unbelief. But what if? But when you make that decision, this is final authority in my life. When it says forgive, I forgive. Amen. Thank you, Lord. My grandson, Jeremy, was teaching. He said, "How do you determine the intelligence of a dog? Watch this. Sit! Good dog. Roll over. Good dog". Obedience. "Good Christian. Good Christian! Stay! Stay! You're where I put you! Stay! Don't be jumping up. Okay. Okay. Go! Good Christian"! Where does that come from? By making a decision what his Word says. Huh? That's final authority in my life, when I'm understanding what it's saying to me, that what I'm gonna do. Hallelujah. I'll meditate it, and do it. Glory to God.

Well, then, being a doer of the Word, here again you're gonna come back Mark 11:25, when you stand, praying, forgive if you have fault against any. Well, that's a spiritual law. And it is part of the law. When you love your neighbor as yourself, you fulfill the Ten Commandments, and if there be any other Commandment is fulfilled in love thy neighbor as thyself. But Jesus said love the brethren, even as he loves the brethren. Even as God. Those are not suggestions. But you have to make a decision that is a quality decision. A decision, a quality decision, is a decision about which there is no longer any argument from which there is no return.

You say, "Well, I believe I need to fast for a couple of days". Hmm, you're about to eat six or eight of the biggest meals you ever ate in your life, because the Devil heard you. And so did your own, un-renewed mind. Said, "Boy, we better pig out. He's gonna quit eating here in a day or two". But when you go to the Word, and you say, "Father, I sense very strongly that I need to pull aside and fast, and seek you, concerning your wisdom in this thing here. So in the Name of Jesus, before you, food will not cross my lips except, of course, I drink water or maybe no pleasant food. Whatever the demand". And there's a time span. "My decision is from this day until that day, I will not eat".

So that certain things in my life are settled. Don't pray about them anymore. No. Don't pray about that no more. That's settled. Amen. Now, if you're in and out where your flesh talks to you about as much as the Bible does, you're really a spiritual schizophrenic. You say, "Well, Jesus is my Lord". No he's not. He's your savior. He's not your lord. In a lot of cases here, your physical body is your lord. But when you go back and you begin to meditate in the Word of God... This is what I am. And this is what I do. I had to change from being a commercial pilot. The first love of my life was not aviation. The first love of my life was the entertainment field.

Whoa. Man, I started out just as a little, bitty guy. Just barely in grade school. And my fourth grade teacher, her sister, who is also a teacher in the same school, but her sister lived right across the street from our house, and I got double jeopardy. My mother would have a brunch or something for all of my teachers. Oh, I had had it. She said, "If you have to spank him, spank him. But you call me because he gonna get another one when he gets home". Boy, she meant it, too. Anyway. We were standing there in music class and we're all singing, and I'm just standing next to my desk singing. And Mrs. Webb is walking around and she just walking from desk to desk, and she walked up there in front of me, and she walked around and she walked back around here to me. She sat everybody down. Turned the class over to somebody else. Said, "Kenneth, you come with me".

Oh, brother. And we just headed down the hall, but we went past Mr. Anthony's office. And she took me out and put me in the car. And I could see where we were headed. We were headed to my house. We didn't live six blocks from that school. And sure enough, she drove up right in front of our house, and pulled me out, and I'm going, "What in the world have I done"? We had a little Spinet piano in there, and in the first place she's hollering at my mother, "Vinetta, are you in there"? Of course, mom was there. She came out and had me in hand, you know? My mother frowned up. I couldn't figure out what I'd done. But she sat down at the piano and started playing the same song. She said, "Now, sing"!

Oh. Okay! So had a contralto, soprano voice. I was 14 years old when it changed and I was singing in a church the morning it changed, and it messed up so bad. That's a whole other story. Anyway, she said, "Vinetta, did you know he could do this"? She said, "Well, of course"! She said, "Well, I just hoped maybe you knew". Anyway! So that started way back there. And that was my God. Because I could use it to get anything I want. Well, and it came finally ... Went from that over into the aviation field, because I got over into the entertainment thing, and had a successful record. That thing got on the charts. But it is so far out of the Will of God, and my momma is praying the Will of God for me. And anyway, I won't go into all that, but I had to make some decisions. Why am I?

And then I got called to preach, and God ... Into this ministry. But I'm having to make certain decisions here, now. Am I a singer that preaches? Am I a pilot that preaches? Or am I a preacher that sings and flies? Hey! I found out. I'm a preacher! And I still sing, and I still fly! Glory to God, I took some flight training yesterday after we got ... Whoooooaa! Hallelujah. Thank you, Lord. But see, certain decisions had to be made. I can't be bouncing back and forth between, "Well, maybe I'm not called to preach". Because something didn't work out. You settle it. Settle it forever in your mind. This is who I am. This is what I do. And we're out of time together today. Amen. Did you enjoy it? Did you get anything out of it? I did, too.