Kenneth Copeland - The Blessing Will Show You the Way 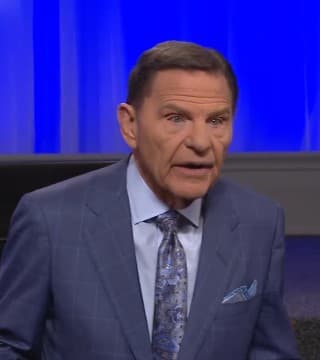 Hello everybody, I'm Kenneth Copeland and this is The Believer's Voice of Victory broadcast. Give the Lord a praise today and thank him for the opportunity to teach, preach and heal. We're right here in class at KCBC, and I'm telling you, I told you this the last time I taught here, and I'm going to tell you again, if you can't preach to this group, forget it. You can't preach brother. Now, I realize because of scheduling and so forth, that these broadcasts were several weeks apart. Well more than just weeks and that won't happen again, because it really needs to be back to back so we can refer to things on a more closer basis, but that ain't going to happen anymore. Praise God.

Father, we thank you today. We open our hearts. We open our minds for revelation from the heaven. To receive insights and ideas, and concepts of living the life of faith, hope, and love, but most of all we would see this Jesus. Glory to God. We thank you, and we give you praise and honor, and all of the glory in Jesus name. Amen.

Now then, let's go back and read the blessing. Verse 28. God blessed them Adam and his wife Eve, and God said unto them, "Be... " Yeah, thank you Lord. Thank you Lord. Do a study on the little word be. It is powerful. What does the word Amen me? Be it. Light be light was, or hey, you want to get blessed, blessed, blessed. Take the time to look up the Be's. All right. God blessed them and said unto them, "Be fruitful and multiply and replenish the earth, and subdue it and have dominion over the fish of the sea, of the fowl of the air, and over every living thing that moveth upon the earth". That's the blessing. Now let me remind you of something. Once God put something in the earth you can't get it out. There ain't no devil in hell big enough, but that's what he tries to do, but he can't. Once it's in here, it's in here for good. Once the Word got in here, you can't get it out. Once Jesus got... Are you listening.

Oh yeah, Lord I done preach me happy and I hadn't been here 30 seconds yet. Glory to God. Now then, the blessing. Say it. The blessing of the Lord. Same blessing over Noah and his sons. Exactly the same. Said the same, very same words. Why? Starting over again. Starting over again. Nobody here but him. Nobody here but Noah, and we remember that Seth was the only one that stayed with the blessing, and like we said last time, that he in studying Jewish history and so forth, he became Melchizedek, which is that's a title. Means Lord Mayor of Salem, which became Jerusalem, and you know. It's amazing when you stop and think that how closely connected was Abraham with Adam. It's only a few generations away. Particularly Adam lived almost 1,000 years. 930 years. How could he live so long? He didn't know how to die. Satan had to get it in his mouth. Satan had to teach him how to talk. He talked to God, so he talked like God. Amen. And he's blessed. He's blessed. Glory to God. Now then. Thank you Lord. Thank you Jesus.

I want to go back where we were studying about Joseph, so let's go back now to... Where do you want me to take that up Lord? Thank you Jesus. Okay, let's go to 39th chapter of Genesis. There's some things we studied that quite extensively, but there are a few more things here that I want you to see, and we're going to read in more detail this time. Thank you Lord. Joseph, there's an interruption... Here we go. When Joseph first dreamed in the 37th chapter, in the fifth verse, Joseph dreamed a dream and told it his brethren, and they hated him yet the more, and he said unto them, "Here I pray you this dream which I have dreamed, for behold we were binding sheaves in the field and low my sheath arose and also stood upright and behold your sheaves stood round about and made obeisance to my sheaf". And his brethren said to him, "Shalt thou indeed reign over us, and shalt thou indeed have dominion over us"?

And they hated him yet the more for his dreams, and for his words. Yet he dreamed another dream and behold told his brethren, "I've dreamed a dream more and behold the sun and moon". And so forth and so. And he told his father and his brethren and his father rebuked him and said unto him, "What is this dream that thou has dreamed? Shall I and thy mother and brethren come to bow down before the earth"? His brethren envied him, for his father observed saying, and his brethren went to feed their flock in Shechem. Israel said to Joseph, "Do not thy brethren feed the flock in Shechem? Come and I will send thee unto them"? And he said to them, "Here I am".

Now, when this occurred, he was 17 years old. Joseph was 17 when he dreamed his first dream. Look back at the first verse. Jacob dwelt in the land wherein his father was a stranger in the land of Canaan. These are the generations of Jacob, Joseph being 17 years old. This is extremely important information. 17. Now, lets go over now to the 39th verse, the chapter. Joseph was brought down to Egypt and Potiphar, and officer of Pharaoh, captain of the guard, and Egyptian, bought him out of the hands of the Ishmeelites, which had brought him down there, and the Lord was with Joseph and he was a prosperous man, but he's just a boy. But he calls him a man here. He was a prosperous man, and he was in the house of his master, the Egyptian. His master saw that the Lord was with him, and that the Lord made all that he did to prosper in his hand.

Joseph found grace in his sight and he served him and he made him overseer over his house, and all that he had put into his hand and it came to pass from the time that he had made him overseer in his house over all that he had, that the Lord blessed, the Lord blessed the Egyptians house for Joseph's sake, and the blessing of the Lord was upon all that he had in the house and in the field. Now we're going to see some things here. We'll get insight even deeper into the situation here. It came to pass after these things that his master's wife cast her eyes upon Joseph. Well, he's probably not but 19 years old. Maybe 20. I don't think he was even that. He's just a young man. He's not old enough to know anything. Had he had any kind of experience at all, he would have never gotten caught in there with her without anybody in there. He's just a kid. 18? 19? Well no wonder she's after him. That's an eye opener isn't it? Amen?

All right. He refused, and said unto his master's wife, behold my master wotteth not he does not know what is with me in this house, and he hath committed all that he hath to my hand and I'm just a teenager. I'm very young. That makes this even more powerful. The blessing of the Lord was to had to teach him, had to raise him. His daddy hadn't raised him. His daddy petted him. His brothers hated him. Of course, this is the most important family on the face of the earth. Amen. The 12 tribes of Israel came out of that so there had to be a prophet born into that family. Had to be to keep it from destroying itself, and so, there's so much insight into this. The Lord just pointed this out to me since the last time we were together on this and I was restudying it and so forth and so on and so on.

I had seen it long years ago, but I just... It had just slipped my mind and my thinking that he brought it back up to me, and made it so strong to get the insight, a deeper insight into this situation, and it will continue to show more as we go. He refused, saying, "I'm not going to do that. There's nothing greater in this house than I am, and he kept nothing back. I'm not going to do this. I'm not going to do it". You don't make decisions on the spot. Quality decisions are made before. A quality decision is a decision about which there is no more argument and from which there is no return.

Well you know, Brother Copeland, you know. Oh yes. Glory to God. I know we must walk in love. Well you better do it every morning before you leave the house because if you don't. Well you know, I know we should. I know we ought to be doing that, and you know sir, I've just had this notion I ought to probably fast a couple of days. You fixing to eat six of the biggest meals you have ever eaten in all your life, because you just let the devil know what... He don't know anything without you telling. Amen? What do you do?

Father, in the name of Jesus, thank you for leading me to fast. I make the decision today food will not cross my lips this entire day. I will praise you and then take communion. He can't make you eat with a stick. That's a quality decision. Then write it down. God will back your word written, when you back it with his Word written. Ask me how I know? I used to weigh 100 pounds more than I do now. Amen. The fat man will never be back. Hallelujah. Are you listening to me now?

Quality decision. Decisions made based on the Word of God, and there's certain things that you pray about, and you never pray about them again. Never. You find out who are you in Christ Jesus. You find out what your calling is. "Well, I thought I was called to preach". Oh shut up. "Well I just don't feel like it anymore". Feelings. Five physical senses instead of walking by the Word. That's where your decisions have to be made. I'm blessed. Hallelujah. Somebody ought to say Glory to God right here. Hallelujah. Yes Amen. Glory.

Now, I want to go back and remind you that the first sound the human ear ever heard, God created Adam. He became a living, speaking, Spirit like God, the Chumash says, but you have to remember, he didn't hear any of that. He became a living being. The first word he ever heard be blessed. Be fruitful. He wasn't fruitful until God said that. Hallelujah. Glory to God. Now, also, we're talking now about how did Joseph, young man, never see... He was just a farm boy. A petted farm boy. Didn't know anything about life. He knew nothing. He didn't know how to live. Praise God, and the blessing of the Lord had to teach him. What does that mean? That means the Spirit of God was teaching him. He's his teacher. Who is your teacher? Who is my teacher? The same Spirit of God who is the blessing of the Lord. And we're out of time. Hey Jeremy.