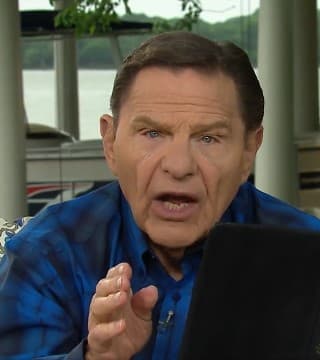 KENNETH: Hello everybody, We're Kenneth and Gloria Copeland, and this is the Believer's Voice of Victory broadcast. Let's have a Word of prayer together. Father we thank you today. We just worship you and praise you. We thank you for the Word, oh the Word of the living God. We know the truth and it's made us free and we appreciate it so much, and we give you all the glory, Lord Jesus. Oh my, my, my, my. We are so grateful to you today, for the opportunity that you've given us to preach, teach, and heal, just like you when you were on the Earth. And we worship you for it, we thank you. In Jesus' name, Amen.

GLORIA: Here we are.

KENNETH: You know we were taping at our prayer cabin there in Southwest Arkansas. You know we do five broadcasts a day. We do one week one day and one week the next. Oh, that next day, I can say out in west Texas, it come a frog strangler. I tell you, it rained and it rained and it just rained us out.

KENNETH: So anyway, now here we came home to our place here and this is our boat dock down here at our house here in Fort Worth and it did it again. I mean it just rained. If you can see the lake it's just sloshing over the top of everything.

GLORIA: Was it the early rain or the latter rain?

KENNETH: We got the whole thing.

KENNETH: And so we're down here in our little family pavilion down here. So anyway we just wanted you to know what's going on and it's just wonderful. It's good when you know that the blessing of the Lord makes us rich and he adds no sorrow with it. Now...

KENNETH: Let's go back to our golden text for these meetings, which we started there in our place there in Arkansas. Which is 1 Peter, chapter five and Jesus our caretaker. Now Gloria said something this morning and I'll show you in just a few minutes where this came from. You could call this like it never even happened.

KENNETH: And I noticed for years, I'm talking about years, I kept asking the Lord I said, "Lord I know your grace is unmerited favor and the favor of God that Jerry Savelle has so powerfully preached on all these years," glory to God. I learned a lot from Jerry about walking in that favor.

KENNETH: But there was just something nagging at me that I need a working way to explain that grace. And after all those years one day he just answered me. He said, "It is my overwhelming desire to treat you like sin never even happened".

KENNETH: Whoa isn't that good? And now you know the commercial with the green trucks and the green people and they come in and clean up after a flood or something like that? I remember that flashed across the TV screen one evening and their slogans "like it never even happened". Gloria look a there, that's grace. That's grace, like it never even happened. Glory to God.

KENNETH: Now, well let me get ahead of myself.

GLORIA: Get excited now. Go ahead and get excited.

KENNETH: Okay. All right, 1 Peter, five, verse five. Likewise ye younger, submit yourselves under the elder. Ye, all of you be subject one to another and be clothed with humility. Now Gloria, most Christian people do not have the scriptural concept of what it means to humble yourself. Be clothed with humility. Well, I'm just a little nobody. No, that's carnal minded and, humility is not self debasement.

KENNETH: Brother and Sister Copeland prayed. Well, glory to God. I mean, they prayed. Whatever, you know.

GLORIA: So, she took it.

KENNETH: She took it, and she just didn't care. She just rolled all the care of it over on Jesus. Now, I was ministering this a few weeks ago to another young woman. And, having trouble in different areas. One of them was financial, one of them was her teenage son, and there was things really, really bothering her. She's a member of KCM staff. It was really bothering her, and I had never... I'd never seen it like this. It was such a revelation to me, and to her. I called her by her name and I said, "What if Jesus was standing right here"? And you said, "I have this problem with my son, Peter, and I've got..". I said what if Jesus standing right there, and he said, okay. You could see him, and you just said, "Okay, fix it". And he said, "Okay". You wouldn't give that another thought. You could see Jesus, and he's standing right there. And you said, "Jesus, I can't fix this. This is really bothering me. Here, you fix it". And he said, "Okay".

KENNETH: And then, just disappeared.

KENNETH: You'd say, whoa! Glory to God, it's done. Let me tell you something sweetheart, this is even more powerful than seeing him in the flesh. You remember what he told Thomas? Thomas said, "I'm not going to believe anything unless I can feel it, and see it. Put my hand in the... the finger in the holes in his hand and in his side". Jesus said, "Thomas, quit being faithless". This book, this Bible is just as much a manifestation of God in the earth as the Father, the Son and the Holy Spirit. This is God manifested in his covenant, hallelujah.

KENNETH: Whoa. Glory to God at them! Preach me happy. Thank you Jesus. It ain't even lunch yet.

KENNETH: Glory to God. Can you see where we're going with this? Cast the care over on him. I remember when John was just a little boy. He had... we never did... I never did have any kind of diagnosis of it, and in fact, a doctor never looked at him. But his skin, he was about four, maybe five, and we were in a meeting. Back in those days our meetings were two, three weeks long. And this was a three week long meeting. So, his skin just, from his little waist up, was just red and felt kind of like crepe paper. And just sunlight, oh it would just hurt him. So, I put him to bed. Gloria and I laid hands on him, and prayed for him. Prayed over him. Went to bed, I woke up. And I got up and went in there and checked on him. I prayed and, thanked God for his healing. I got up the next morning and he wasn't a bit better. So, excuse me. And I went back to bed, and I woke up a couple of times during the night and so forth, thinking about him. I was worried about him. I didn't know what it was. I was worried about him. But we prayed. So, the next morning I got up for morning service, and no, let me back up just a second. I'm missing the point. So, that next night I... when I went to bed, I said, "Lord, what's wrong here? I've missed it some place. You can't miss it, and we prayed. We believe God. How am I missing this here"? He said, "Doubt".

KENNETH: Whoa. He said, "You haven't rolled the care of that over on me". And he said, "Doubt and worry is the thief of God's greater blessings". He said, "You haven't cast that care over on me. Let me have it". So we did. And, went on to bed, and I woke up about the same time I did the night before. My feet were already out of the bed and on the floor, and the Lord reminded me of that. I said, "Thank you Jesus. That care is rolled over on you. I'm not going in there and check on John". And I heard this, "Well, he's kicked his cover off. You better go in there and check on him". That nothing but the lies of the devil. I said, "Well, glory to God. If he's kicked his cover off, angel, you can just put it back". I just rolled over and went back to sleep. But now, before I could get to sleep I heard the devil say this, "Now, aren't you some kind of a parent. You just don't care enough to even go in there and check on your own son. That's irresponsible". I said, "No devil. No devil. Irresponsible is to doubt his Word, and I have cast the whole of my care of John Copeland over on Jesus". And just went on back to sleep. Well, I got up for my morning service that morning, and went on to the venue. After the service, and of course, I had taught there for over an hour. I was talking to some people there after the service, and I felt a tug on my coattail. It was John. He said, "Daddy". I said, "John, I'm... just a minute. I'm talking to somebody". I started talking. He said, "Daddy"! I said, "John, just a minute son". He said, "Daddy! Look at me! I'm healed"!

KENNETH: I learned right then, the most irresponsible thing anybody could do is to get into pride thinking you could do better by worrying about it. It's not true. The best thing you can possibly do is role that whole care over on Jesus, your caretaker.

GLORIA: I've got something good about that the other day, a statement. Excuse me. Fear and worry are the opposite of faith. You can't be in both at the same time.

KENNETH: No, they don't work.

GLORIA: So what do you do? You rebuke fear, or whatever, and get on your faith and stay.

KENNETH: Yeah, and the Word should...

KENNETH: The Word... let's go to 1 John. Let's go to 1 John, and that's explained in the fourth chapter of 1 John. Just, it's so plain. Verse 18 of the fourth chapter of 1 John. There is no fear in love, but perfect love... that's talking about love that's growing and developing or maturing, and that's what we're talking about here today. Perfected love casteth out fear because fear hath torment. Now, what did we say over there? Worry is to torment ones self with cares and anxieties. All right, now listen to this. He that feareth is not made perfect in love. Well I sometimes just feel like God don't love me. Well, you're just as wrong as hell. Did you hear what I said?

GLORIA: I heard it.

KENNETH: That's hell that brought that subject to you. That is hell itself that told you that, and you don't need to be falling for that trap. You know better than that! Don't ever say, don't ever challenge God because he doesn't care. I just got through reading to you, that's pride. Cast the care over on him, for he cares for you.

KENNETH: Jesus is our caretaker.