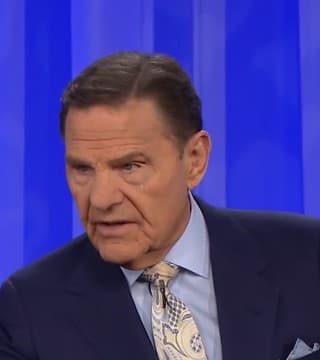 Father, we thank you for this week of broadcast and we give you praise and honor for the privilege of preaching, teaching, and healing just like you did when you were on the earth, and we praise you and worship you and thank you. We open our hearts, we open our minds, we open our very beings to you to receive revelation from Heaven, words from Heaven, that move Heaven on the earth. We thank you in Jesus name, Amen.

Let's open our Bibles to the third chapter of the book of Galatians and this will be our golden text all week. We will see some amazing things. I got so blessed today just going through... the Lord... I don't know how many times I've taught from the scripture, I don't know how many times I've taught about being redeemed from the curse of the law. I learned it 52 years ago and I've been preaching it ever since I found out about it, but what is so amazing is how you can just keep reading, keep teaching, keep preaching from the same verses and all of a sudden, zoom. Amen. It opens up and just such a blessing.

Galatians chapter 3 verse 13, Christ hath redeemed us from the curse of the law. Being made a curse for us, for it is written cursed as every one that hangeth on a tree that the blessing of Abraham might come on the Gentiles through Jesus Christ, that we might receive the promise of the Spirit through faith, or that we might receive what the Spirit promised through faith. Now notice just in those... just in those two verses of scripture, there is the curse, there is the blessing, and there is the promise. Amen. Now, I don't know if you realize this, that's the whole Bible. I mean, that's what the whole Bible is about. It is about being redeemed from the curse and receiving the blessing of Abraham. Amen. Praise God. And inheriting the promise.

Well there you are. Good night. Oh glory to God. Now, the curse, let's go to Deuteronomy 28. It's very, very important that we understand everything. Every heartache, every human disaster, every storm, all poverty, all sickness, all disease, everything, all of it began after Adam fell. And it wasn't God. He didn't do it. He didn't curse the earth. When God created man, he blessed him and we'll see that. He blessed him. He saw that it was good. God has never, ever made anybody sick. He's never made anybody poor. No. We did that on our own. Yeah, we missed it. Through sin, you open the door to that curse. But I wanted you to see this.

Now this sounds kinda funny, but listen to me. Nobody sinned and died until Adam sinned and died. That's profound, isn't it? But really, the way, the religious ideas that have come up from a total misunderstanding of the Bible have dreamed up things that it just seems like God has a problem with everything. No, He's not. He is the deliverer from the problems. Amen. He's not the author of the curse, He's the author of the blessing. Now then, beginning with the 15th verse, the first 13 verses is the blessing of Abraham.

Now beginning with the 15th verse, and I want you to notice how this 15th verse is structured. In fact, let's look at the very first verse and you'll notice it's structured the same way. It will come to pass if you shall hearken, notice that word here, Ken? Okay. I believe I will. It shall come to pass that if thou shalt hearken diligently under the voice of the Lord thy God to observe and do all His commandments, which I commend ye this day, that the Lord thy God will set thee on high above all nations of the earth and all these blessings shall come on thee and overtake thee if you shall harken, or if you'll listen to me. If you'll listen to the voice of the Lord thy God. Now that's the will of God right there. You want to know what God's will is? That's it. Amen.

Now, look then at the 15th verse, and notice it's structured the same way. It will come to pass if you will not harken unto the voice of the Lord thy God, if you won't listen, to observe to do His commandments and His statutes which I command thee this day. All these curses shall come on you and overtake you. It doesn't say anything about God putting them on you. Actually, if you'll notice carefully that He released the blessing. He doesn't have to just come to your house one morning, wake you up and say, "Bless, bless, bless". No. That's what His Word does. See, He released it. "Now if you'll listen," He said, "And do what I tell you to do, these blessings will come on you. It's gonna come on you and overtake you but if you don't listen, you won't do what I tell you to do, you're gonna get in trouble and I'm not gonna come have to knock you in the head, the devil will take care of that, and he's waiting on you".

Now, then you come on down, for a curse should be in the city and so forth, then verse 21, the Lord shall make the pestilence cleave unto thee until he has consumed you from off the land where you go and possess it. The Lord shall smite thee with consumption, with fever and with inflammation, with extreme burning. Now, this leaves the idea that God is the author of consumption, that He's actively causing people to have tuberculosis, that He's actively causing pneumonia. When no, He isn't.

Now, and you read there are 11 different diseases mentioned here, but I want you to look at the 61st verse, also every sickness, every plague which is not written in this book of the law will come upon you until you're destroyed. Every sickness, every plague came as a result of sin in the beginning. That curse, the power of that curse came on this earth. Now, what empowered it so? Well, God blessed Adam. Amen. Gave him dominion over this earth, everything in it, everything that flew, swam, creeped, I mean if it moved he had authority over it. If it didn't move, he had authority over it. Complete command authority over this, not only this earth, but over all the works of his hand. Whoa. Hallelujah.

Now listen to me careful. When God blessed him... well, actually, that authority didn't come when He blessed him, that authority came when He created Him. Amen. Let's go over there and look at that, if you would please, in Genesis. That's right at the beginning. Amen. Let's look in the first chapter. I would like to call your attention that God is the same yesterday, today, and forever. There is no shadow of turning in Him. That means right here in Texas He ain't about to change. No. It's not that He won't, He can't. He got it right the first time. It's not that He won't lie, He can't lie. "Brother Copeland, I just don't understand that, that God can't lie". He can't.

If He were to come in here tonight and say, "Isn't this a wonderful Saturday night"? Someone would say, "Uh, Lord, no. This is Thursday night". "Not anymore it isn't". You could look at your... whoa. How did that change? I mean all the calendars on earth would change, because He said it. Amen. Glory to God. I'm sure that's just completely exciting.

Now, so God, when you follow His method of operation in chapter 1, in the beginning God created the heaven and the earth, the earth was without form and void and darkness was upon the face of the deep, and the Spirit of God moved upon the face of the water and God said, "Let there be light," and there was light. Actually, if you'll study, I learned this many years ago, that a Rabbi allowed me to get in to his study and his library and so forth, oh, and I had such a wonderful time. I learned from the writings that I read there that God actually said, "Light, be. Light was". Can you imagine that? No, you can't. Hallelujah. Say it with me, Light, be. Light was and God saw. Glory to God. Now, when you follow that, each time the King James says "Let there be, let there be, let there be," and each time He is just saying.

Now I've seen those computer generated images where God created the man out of the dust and it just seems like he just was formed out of the dust and there he was alive. Well, okay. But, in my studying and praying and seeking God, one day, and I spent quite some time studying this and particularly in the blessing of Abraham and the blessing of man, the Lord opened my eyes and I saw it. I saw Him holding this grayish lifeless physical body. Finished. The body was finished. He was holding it by the shoulders. Now you have to understand that God didn't do this by Himself. No, no. Jesus actually all things were created for and by Him. Jesus, study it out for yourself, Jesus is the one that actually did the speaking.

Now, remember now, we follow His MO, His method of operation. Now then, I saw Him holding this body. God said in verse 26, let me go over here to the seventh verse of Chapter 2, the Lord formed man of the dust of the ground and breathed into his nostrils the breath of life and man became. Well, what do you think, He held him up there like that and He kind of got up there and went phew, phew? Of course not. He breathed. Same word as Spirit. He spirited. He breathed. All right. Let's go to Galilee. And He breathed on them and said, "Receive ye the Holy Ghost".

Now here is, He's holding him and now... I should have thought of this, but I didn't until I saw it in this vision. He's holding him like this and they're exactly the same size. Exactly the same size. Now that's pretty amazing, but he's the exact image, he's an exact copy of the Father, the Son, and the Holy Ghost. Exact copy. No, not one iota less. Just as much as Jesus an exact copy of the Father, Adam was an exact copy of Jesus. While I'm at it, so are you. Glory to God. That's what the new birth was all about. Thank you, Jesus.