Kenneth Copeland - You Have Today What You Said Yesterday 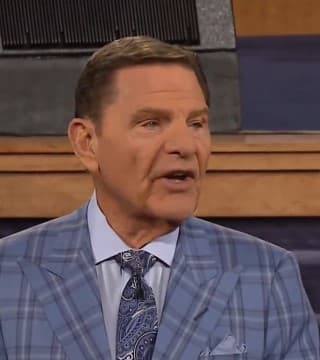 Mark chapter 11. The Lord gave me a very, very strong mandate and said to me, "You go back and you begin teaching, again, the fundamentals of faith. Go back to the fundamentals". He said, "You're teaching from the place where you are," and he said, "New people coming in they can't even understand what you're talking about. Go back to the fundamentals". And, so, I had to learn how to preach it over again, praise God. I'm so glad I did, I've learned so much since that day and so we're going to be beginning there this morning in the 11th chapter or Mark. Let's read from verse 22, "Jesus answering saith unto them, Have faith in God". If most of you have a cross reference like I do it says, "Have the faith of God," which is very accurate. "For verily I say unto you, That whosoever shall say unto this mountain, Be thou removed, and be thou cast into the sea; and shall not doubt in his heart, but shall believe".

Let's look now at 2 Corinthians chapter 4, please. 2 Corinthians 4, and look at the 13th verse, "We having the same spirit of faith, according as it is written, I believed, and therefore have I spoken; we also believe, and therefore we speak". Now, look at the 16th verse. "For which cause we faint not; but though our outward man perish, yet the inward man is renewed day by day". Now, faith is a spiritual force. It is not a mental force, it is not a physical force, therefore it is of the inward man. You are spirit, you have a soul, and you live in a physical, natural body. Faith is a spirit force born of the spirit, born of the Word of God and God is a Spirit. Those that worship him, worship him in Spirit and in truth. Praise God.

Now, then, let's look at Romans 10:10, "Out of the mouth of two or three witnesses, let it be established. For with the heart," with the inward man. "For with the heart man," or mankind, "Believeth unto righteousness; and with the mouth confession is made unto salvation". So believe with the heart and then release it with the mouth, say it with the mouth. All right, let's go to Luke 6:43, please. This particular scripture reference is very revealing, particularly in getting a solid concept of faith. Luke chapter 6 verse 43, "For a good tree bringeth not forth corrupt fruit; neither doth a corrupt tree bring forth good fruit. For every tree is known by his own fruit. For of thorns men do not gather figs, nor of a bramble bush gather they grapes. A good man out of the good treasure," or a deposit, "Of his heart bringeth forth that which is good; and an evil man".

Well, there's a such thing as a sacrifice of praise, so just start where you are right now and go where you've been going and then take that next step that you really didn't want to do. Just keep doing that and keep doing that and keep stretching and keep stretching, keep stretching. You'll finally wind up just as wild as everybody else around here. And then, you'll be comfortable among all of us. Hey, doc. It's good to see my brother. Now, so we've established from Mark 11:23, 2 Corinthians 4:13, Romans 10:10, Luke 6:43-45 that the first basic fundamental of faith, believe it in your heart and say it with your mouth. It's not good enough just to believe it in your heart. That's good and you have to do that, but that's not the whole thing. This is spirit, soul, and body. This is an integrated system. It works all in unison. Whether you and I like it or not, it works all the time. It's working all the time. Spirit, soul, and body is functioning all the time. All the time.

You do have today what you said yesterday. The only way you can change for what you're going to have tomorrow is change what's you're saying. Start off by changing what you're believing. Most people... when I talk about things like this, unless I draw attention to it in a specific way, I'm talking about born again people, understand? When I say most people I'm talking about most Christian people, people that know the Lord. Born again people. But most of them believe their feelings. They believe what they see, they believe what they hear most of the time. You'd be surprised how many people are so oriented in the news media and don't have a clue what's really going on. Do you understand those people?

Well, they have a tendency to lie. Well, come on. Yeah. Amen. Because they are still in the news business. Amen. But let me back up a notch here. That's the reason it is so vitally important the time that you give to the Word, the time that you spend in God's Word, searching his Word, choosing to believe what's there, even if it's just totally opposite, diametrically opposed to everything around you and everything that's just shouting at you that it's not that way. Yeah, but this is what he says. This is what he said, praise God. Believe it, then say it. Now, the second fundamental, second point of the fundamental of faith. You believe it in your heart, you say it with your mouth, but you're not there yet. Act on the Word. You can put it this way, act on your faith.

Now, here again, you do that all the time. Whatever you're believing, you're saying. And whatever you're believing and saying, then you act like that's true. You do it all the time. People get to thinking about you. Oh, dear Lord. I believe I'm catching the flu. Well, no question about it, darling. Because you believe you're catching it, you said, and now you're hunting a shot. See, you believed it, you said it, now you acting on it. Well, that's fine. If that's all you know how to do, you better get the shot. Maybe you better get two, you believing it's strong enough. And then, the first little sign of a symptom, "Oh, I got it. I got it. I got it". Human beings were created to function this way. The only thing of it is, we were created to function in the faith of God, in the Word of God, and act on that Word.

Well, Satan can't change anything. He has to use whatever's at hand. Because he is a totally dead spirit, he can't create anything, he's extremely dumb. Now, I don't mean in a way of a lack of intelligence, it is dumb to think you can overthrow God. Brother, I mean, that's the height of dumb, dumb. That's how dumb can you get right there? Well, he tried it, lost it, lost his anointing, lost everything he had so he is stuck with the laws of the Spirit. He's stuck with that. He has to work inside that parameter. That's the reason that when Jesus laid out the laws of the Spirit in his Word, that's the reason he said, "The sower soweth the Word, Satan cometh immediately to steal it".

Now, let me warn you about something. Satan did not come to kill, steal, and destroy. He came to steal, kill, and destroy. I used to quote that around the other way, he's come to kill, steal and destroy. No, no, no. You have to keep it in the order that Jesus said it, he comes to steal. If he can't steal it, he can't kill you. What is he out to steal? Your money? He don't care nothing about your money. The Word. If he can steal the Word, he's got your money. You'll get it to him with your mouth. Calling yourself poor, broke, I'll never make it. Boy, when they call poor boy I don't answer. I used to but that's the reason I have so much compassion for people that can't pay their bills, people that are hurting financially and people that are poor. I'm telling you, I hate poverty. I hate it with a passion you cannot imagine. I love people.

Listen, poor people, they just got a special place for me. Because I long... now, I've never been destitute. Well, momentarily for a while I was but it was my own stupid fault, of course. I've been there, where you just didn't have enough money to make it and things were in really, really bad shape. That's the reason I'm so big on the prosperity of God. Hallelujah, glory to God. I particularly go into other countries and certain parts of this country, of course. But I go there and it hurts, man. It hurts me because I know what's available. I know what can happen, I've seen it. I've seen it happen in the midst of abject poverty. I've seen the Word of God take hold and people just rise up out of there and just turn the place inside out and right side up with the power of God. Hallelujah. Thank you, Jesus.

Well, of course, everything far and wide come running around that lake. And, so, they began to set up food plots where they were planting around that lake and the Lord said, "Now, you supervise this and you see to it that no two members of your church are side by side on their food plots. You do saint, sinner, saint, sinner, saint, sinner". He said, "You checker board it around that lake, like that". And he did. Well, of course, just in the natural you got the water there and you got the seed. Well, even the sinner can get a crop in a situation like that. But the people that belong to that church and the ones that were functioning in faith, their crops were two or three times what the right next to them. So you'd have a bumper crop and a normal crop, and a bumper crop and a normal crop. It opened the eyes of so many people around that area and around that town that everybody got born again and everybody had bumper crops.

Go back to that what Jesus said, "The sower sows the Word, Satan cometh immediately to steal the Word which was spoken". He is under pressure from this. Jesus said, he said, "My words are not my own, it is the Father that dwelth within me, he does the works". Now, that is a law of the spirit. Amen. When he laid that law down, Satan understands that because he knows if he can get you to believe what he's saying and then you begin to say what he's saying, then he can do the work. He can't work until you give him that place. But now, put it right over on the other side, God can't work either in your life. It isn't that he won't, he can't, unless you keep your eye on him, you keep your eye on his Word, and you believe those words instead of believing what you feel, instead of believing what everybody else thinks and what everybody else is saying. Forget all of that and believe what the Word is saying.