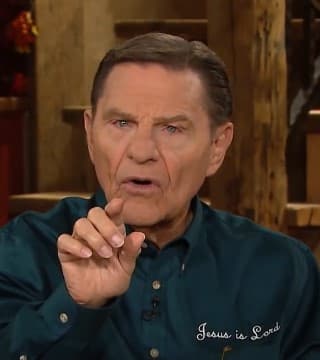 GLORIA: Oh, thank you, my love. I so appreciate it.

GLORIA: Think about it.

GLORIA: And it's not over yet.

KENNETH: It ain't over yet.

KENNETH: Welcome, everybody to the Believer's Voice of Victory broadcast. Before I go any further, don't forget, download the free study notes for this week's broadcast on. It's really, really important to be able to follow along. You've got outlines and you can follow and teach from them and, "Well, Brother Copeland, I wouldn't want to steal your sermon". Are you kidding? You think these originated with me? I'm still preaching Kenneth Hagin word for word. Glory to God.

GLORIA: And it still works.

KENNETH: He said one day, we were at the Full Gospel business men's meeting. Oh, thank you for him, Lord. His table was out there and our table was out there and we had our books and tapes back in those days you know and we were standing there together and he said, "Kenneth, son at least you ought to change the titles". I said, "What other title is there, sir"? So, get those notes. It'll do you good. Praise the Lord. Father, we thank you today for this broadcast. We're thrilled with you, Lord Jesus. We are thrilled with you, Heavenly Father. We are thrilled with you, Holy Spirit, oh, greater one that dwells within us. Our teacher, our leader, our guide, our standby, our advocate, our comforter. Oh, the one who does the works. Glory be to God. Open the eyes of our understanding, Holy Spirit. Open the eyes of our very spirit beings to receive revelation from heaven and flood our hearts with light. And we praise you for it. We believe we receive it by faith and we thank you in the wonderful name of Jesus, amen. Glory to God.

GLORIA: You know, this one?

GLORIA: That's only Mark 4 though.

KENNETH: Oh, and you only mark that things that are good, huh?

KENNETH: I was preaching for John and Carol Arnott in Toronto. The first time I'd preached there and what wonderful people. I met them in Rome when we went to...

GLORIA: At the Pope's house.

KENNETH: Yeah. For that visit with the Pope, I'd never met them. And just fell in love with them. Anyway, they said, "We want you to come teach faith in our church". Well, I'm telling you, Gloria, the word of the Lord, I'm just going along and, "Yes, I'd be glad to teach faith". I got up there and I heard the Lord say, now I've never heard the audible voice of God, I'm open, Lord, you understand? I'm ready anytime. But you have the still small voice of your own spirit listening to the Holy Spirit that every born-again child of God has.

KENNETH: But then there's that more authoritative voice that really most of the time, not all the time, but most of the time that comes in ministry and it's bolder and stronger. But, oh, it was strong enough it kind of took me back. He said, "You're teaching faith from where you are now". And he said, "New people don't have any idea what you're talking about". He said, "Go back to the basics. Go back to the fundamentals".

GLORIA: You know, I heard some things on there I had not heard him say.

KENNETH: Well, and the revelation of it is just so rich. We've been listening to him for...

KENNETH: 51 years. It's a total emersion thing in the Word of God.

GLORIA: It is. It works.

GLORIA: Guys who have absorbed the fundamentals.

KENNETH: Brother Hagin said this one time. He said, "If you're willing to stand forever you won't be there very long.

KENNETH: Isn't that wonderful? Now, the basic fundamental teaching on faith, you will find this same teaching in other of the gospels, but Mark's account is so detailed and is what Jesus said here in the 11th chapter of Mark is the basic fundamental of faith number one. Now, let me back up just a moment here. What is faith? Now that's a good question, particularly to someone that has never thought about it. People talk about faith and a lot of preachers talk about faith. But what is it? How can you label it? Well, Hebrews 11:1 says: Now faith is the substance of things hoped for. It is the evidence, the classic amplified translation says, it is the title deed of things not seen. Here again, amplified, things not revealed to the physical senses. It is a spiritual force, excuse me. Faith is a spiritual force generated in the born-again human spirit. It is released through words. It is acted on with corresponding action to those words. Hallelujah. Faith filled words dominate the laws of sin and death. Let me say that again. Faith is a spiritual force generated in the reborn human spirit, released through the mouth with words, followed by corresponding action. Faith filled words dominate the laws of sin and death.

KENNETH: Now, spiritual forces, whether they're positive or negative, whether they're godly or ungodly, they are the most powerful forces that exist. Not mental forces. Certainly not physical forces. Spiritual forces. Love/hate, faith/fear, life/death, blessing/cursing. The apostle James made this statement in his book, the oldest book in the New Testament, "With thy mouth we bless and with the same mouth we curse". My brother, these things ought not be. And I'm not talking about just using profanity. I'm talking about cursed words.

KENNETH: Yeah. And too, Gloria, the most dangerous ones are the ones you say by habit. You say them all the time. You don't even hear them come out your mouth. Using death and fear and so forth to express yourself. "Well, Brother Copeland, I didn't mean it". It doesn't make a difference whether you meant it or not. Words are the most powerful things on earth. Their primary use was not communication. The primary use of words is a power release and you can not be born again and have tremendous force of your words. You can injure somebody with words and they may never get over it.

KENNETH: In the Bible they're compared to arrows.

KENNETH: Yeah. In our present day, we could compare them to bullets. "Oh, I wish I hadn't have said that". Well, it's too late now. You've already said it. You can repent and that's good, you should, and you ought to do it on the spot but they're already out there. If there wasn't anything involved but you, you're just there in your home and you shot your mouth off, but if somebody else is involved it's like an accidental shooting. That's just an illustration of how powerful spiritual forces are and spiritual forces are released with your mouth. That's the way they're released. Now, this is good, but it's also very dangerous.

GLORIA: It's good if your mouth is good.

KENNETH: Yeah. Amen. Now, let's go to this then in Mark 11:22: Have faith in God. Our cross reference says: Have the faith of God. That is very accurate. Having the faith of God because we know we're born again not of corruptible seed, incorruptible by the Word of God, which liveth in the body forever. The faith of God is in the Word of God. So when you and I receive Jesus as our Lord and Savior according to Ephesians 2:8, it was by grace. Let's look over there. I got the grace and the faith crossed up. Ephesians 2:8, glory be to Jesus. For by grace are you saved through faith and that not of yourselves it is the gift of God. Now we find out in Romans 12:3: "For He has dealt unto every man, referring every born-again man, the measure of faith. When did that happen? The moment you accepted Jesus as the Lord of your life. So that faith was imparted into your spirit and through that your old spirit literally died. It wasn't just forgiven. It died. You were crucified with Christ. Now, the moment that happened is when you were born again and your spirit being, the inner man, you are a spirit like God. You have a soul made up of your mind, your will, and your emotions, the intellectual part of you. You and your soul live in this flesh body. You're a tri-human being. You're an integrated system. Spirit, soul, and body. All right. The moment that happened, you, your inner man recreated, old things are passed away and behold all things have become new and all things are of God, any man, any person, in Christ is a new creature, a new creation.

KENNETH: One translation says a new species of being that never existed before that moment. Ah! Thrills me just to think about that.

GLORIA: Think about it.

KENNETH: Because we have the exact spiritual DNA as Jesus.

KENNETH: Hallelujah. Now, and faith, that faith doesn't go away. There in the book of Romans he said He has dealt unto every man the, not a, the measure of faith. So each one of us, each born-again person received exactly the same measure of faith.

GLORIA: Now what does that person have to do? Develop it.

KENNETH: Oh, yes. It can just lie there and do nothing and become just weaker and weaker and weaker. How does it come? Faith cometh by hearing and hearing by the Word of God. How is it developed? By acting on it and speaking it and thinking about it and meditating on it and not just put it in there with the other thing, blah, blah, blah, blah. "It just thrilled me to death, scared me to death. Oh, glory to God, I'm just dying to go". You might as well say, "That just tickled the hell out of me". It's just as profane as that.

KENNETH: Well, Richard Roberts, bless his heart. I talked to him yesterday. He and Lindsey are doing so good in their healing ministry.

KENNETH: Anyway, sweet brother. He said, Brother Roberts said to him, Richard said, "I wish you'd just get the hell out of my life". He said, "Son, that's what I'm trying to do".

GLORIA: Oh, I never heard that one.

KENNETH: Before Richard got born again. He said, "Son, that's what I'm trying to do is get the hell out of your life".

KENNETH: But now see, "Oh, Brother Copeland, I'd never say that". It's just as wicked in the sight of God to say, "That's just killing me. I'm just afraid to go". Why? Because fear is a spirit and his name is Satan. So you're using him and all of his conversation as a byword, expressing yourself with death, sickness...

KENNETH: ...disease, doubt. More fear than anything else. And fear is the opposite force of...

GLORIA: It's dangerous too.

KENNETH: Already. Glory to God. Isn't it fun? Isn't it good. We're going to have us a time this week.