Kenneth Copeland - Healing Is for Yesterday, Today and Forever 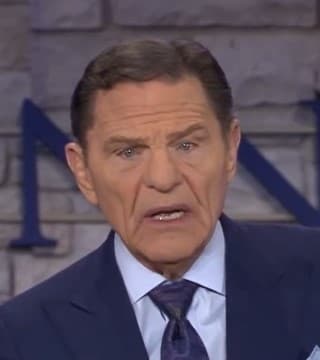 Thank you Lord Jesus. Father, we thank you. We worship you today. We praise you. We come before you this morning, our heavenly father to bring glory to the name of Jesus. To bring honor, respect, and glory to the Kingdom of God. And we bless you this morning. We thank you for providing our healing. Lord Jesus, thank you for being our healer. For going to the cross, for bearing our sins, sickness, diseases, weaknesses, pains, poverty, and all of the curse for us. Being made a curse for us. For it is written, cursed is everyone that hangeth on a tree so that the blessing, so that the blessing of Abraham might come on the Gentiles, glory to God, and that we might receive what the Spirit promised through faith.

When I said disc, I wasn't referring to the DVD disc and the CD disc and just when I said disc, the Lord said, I'm healing disc right now. That healing anointing is on your discs. Hallelujah. Lower back problems are being healed right now. Glory to God. There's an intense concentration on the L1, L2, L3, L4, and L5. Glory to God. Yes, praise God. And then the disc and vertebrae on the upper part of the spine. Hallelujah. Just go ahead and take you a new spine while you're at it. Yeah, glory, glory to God. Thank you Jesus.

Good friend of mine, Gary Wood is his name. He's in heaven now. When he was 18 years old, he was in a terrible, terrible car wreck. Head on with a 18 wheel truck and killed him. He was dead on arrival. But his sister, I'm telling you, she was in the car with him but she was all right. And she just wouldn't turn a loose. She just wouldn't turn loose. Praise God. She just stayed in there. Glory to God. He was being escorted through heaven and one of the things that impressed him so, and you can see why here in just a moment as I tell this story, he came into this place just filled with body parts. All kinds, I mean, every kind of thing you could think of was in that room. And he asked his escort and he said, "What is this"? And he said, "This is the parts room". And he said, "When our people need new body parts and they call for them by faith, the angels deliver these".

The parts room. I'm telling you, you can get a new heart. You can get a brand new, right fresh, out of the box, new heart. New hearts. New hearts are being distributed here this morning. Glory to God. New spines are being distributed here. New ear drums are being distributed here this morning. Glory to God. Praise God. New joints. Praise God. Hallelujah. Glory be to Jesus. Now in that wreck, his larynx was crushed. And he was in the emergency room. They brought him in there and they said, "Well, he's dead". No, wait a minute. He not dead. There's some life about this man. He's a singer. They said, but his larynx is crushed and that he'll never have a voice again. His vocal cords are destroyed.

And in that, terrible thing this young man a singer and headed into the ministry and so forth. And he came around and he said, "Hallelujah". He still didn't have any vocal cords. He preached. He sang. Brought glory to the Kingdom of God. Amen. Without vocal cords. And you absolutely couldn't tell it, boy he had a booming voice. Isn't that wonderful? Glory to God. What is that? That's a sign and a wonder. And these are the days of signs and wonders. So what do signs and wonders do? The sign points you to something and a wonder, makes you wonder. But now when you and I are in faith, we don't need to be getting off into wonderment. I wonder why?

Now wait a minute. You better put the brakes on before you start that. You wonder why what? Nothing. I wonder why this is not working. Just flop that around. Just turn the tables on the devil. And say, "Lord, I wonder why this is working so fast? Could you tell me why I'm just a miracle in action right now"? What are you doing? Praising Him. But at the same time you calling things that be not, as though they were. And giving glory to the Lord, Praise God. And just leave the devil hanging on his own unbelief and fear. Thank you Lord. Praise you, Lord Jesus. Thank you, Lord Jesus.

This morning, let's go to the book of Hebrews, chapter 13. We want to major on this today. This marvelous verse of scripture that should be on the hearts and minds of every believer. Jesus Christ, verse eight, the same yesterday, today, and forever. Do you remember the scripture saying, with God, with Jesus, there is no shadow of turning, no variableness. He is not variable. Whatever he has said to one, it's the same answer to everybody. Amen? Now that's referring, the shadow of turning, is referring to the sundial. Because in those days that was the time piece. And you had one thing, this thing wouldn't keep time in the dark. That's a bit unhandy.

So, if you got a shadow on that thing at nighttime, it gave you the wrong time. But with God, there's no... His shadow never moves. It's always the same. Absolutely no variableness. He doesn't vary from day to day, from time to time. So he is absolutely, completely, totally unchangeable. Isn't that wonderful to know that about him? Oh, thank you Lord Jesus. We praise you for that. And his Word never changes. His name never changes. Hallelujah. So remembering that, say that, Jesus Christ. The same. Yesterday. Today. And forever. Today. Today. If he healed yesterday, he's the healer today. Now to say, "Yes, Jesus saves today. Oh yes, but now you see, healing was for a different time".

Well now, whoa. If he doesn't heal today, then what right do I have to believe that he saves today? If he doesn't heal today, then I have no evidence that the Bible is true when it comes... When it talks about his healing ministry. Let that soak in on you. Amen. How many of you know beyond a shadow of a doubt, you hear that? Beyond a shadow of a doubt that you are born again by the spirit of God today? Hallelujah. How do you know? You learn it. You learned it from the Bible. That's where you found out about it and you believed it and you spoke it with your mouth, and then you just know. I just know. I just know. I'll tell you another way you know. You know we have passed from death unto life because we love the brethren. Amen.

Things changed. The love of God was shed abroad in your heart by the Holy Ghost. Who did that? Jesus. Jesus. He's the same. Yesterday, today and forever. The same saving Jesus. The same healing Jesus. Oh, that's shouting ground. That is so good. Hallelujah. Now then, with this well placed in our hearts and minds that Jesus, the Anointed One, is the same yesterday, today and forever. So you remember then... In fact, we dealt with it at length yesterday. On the anointing, Jesus said, he preached. He said, "The spirit of the Lord is upon me, for he has anointed me to preach". Well, the Bible said, "He taught, he preached, and he healed". He's still teaching today. In fact, he's teaching in here this morning. Amen. The healing anointing is a strong on me this...

Now let's go in our Bibles to Matthew, chapter eight. The same yesterday and today. The same... He's the same today. In here, right now, he's the same. Matthew, chapter eight, verse two, "Behold, there came a leper and worshiped him saying, 'Lord, if you will, you can make me clean.' Jesus put forth his hand and touched him, saying, 'I will.'" That settled it. That settled it for all men for all time. He will. Glory to God it is his will. Now, faith begins where the will of God is known. When you're not sure about God's will about a certain thing, you can't have faith for that. Nobody, I don't care who you are, you cannot have faith beyond knowledge. You have to have knowledge. Knowledge of his will, knowledge of his word, knowledge of his motives and his ideas and his concepts. Amen. In order to have faith there.

Well, I just don't know whether it's the will of God for me to be healed or not. And I, back in the very early days, I never did have the idea that God couldn't or wouldn't or that healing had passed away. That just, I just didn't have enough religion to believe that. And so I've always figured he's God. Amen. You telling he can't do something? Well, he can't lie. But I'm talking about something good. Amen. If he ever did heal. It just made sense to me. And I had not heard that the preaching from over on the other side. And it did not make sense to me that God made you sick so Jesus could heal you. That's borderline stupid, brother. But now, people that think that, they're not stupid people. They've had wrong information. They're indoctrinated, really a better word is brainwashed. So you need to get re-brainwashed. And actually get your brain washed them all that, all that doubt and unbelief. Amen.

I just thought you know, if he ever healed anybody, he's going to heal me. I mean, what's he got against me? But if you've had years of religious indoctrination and it kind of started, I don't know. I don't know. Well see, I don't know, I wonder if, there's no faith in that. Faith cometh by hearing and hearing by the Word of God. Amen. So, when you begin to hear the Word on it, receive it. Just take it. Praise God. If it's for anybody, it's for you. If he did it for this leper, it's there for you. I said, it's there for you. Amen. See he is the same yesterday, today, and forever. So we've not even touched forever yet. There's only a couple of thousand years between us and this leper.

Now, this is not a myth. This happened on a day in time. Jesus touched that leper's physical body. Amen. So, forever's got a long way to go. And that Word will still being true. That Word and still be true and be rejoiced over even after sickness and disease has been eradicated from the face of this planet. Glory to God. And the devil slung out into that lake of fire and it's gone forever. We'll still be celebrating this leper. Only then we'll have the leper there to tell his side of the story. Glory to God. Hallelujah.