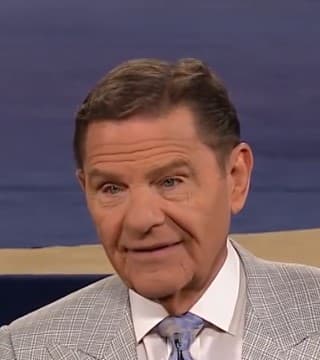 Now, let's go to the 5 chapter of Mark and look at the woman that was healed of the issue of blood. Verse 25, a certain woman which had an issue of blood 12 years and had suffered many things of many physicians, had spent all that she had and was nothing bettered but rather grew worse. When she had heard of Jesus, came in the press behind and touched his garment for she said, "If I may touch but his clothes, I shall be whole". And straight way or immediately, the fountain of her blood was dried up, and she felt in her body that she was healed of that plague.

Now, I want you to notice something. She believed before she ever felt anything. She didn't feel anything until after faith had done its work. She didn't feel her faith, but she felt the impact of that power that went into her. And she knew, she not only knew, she felt it. She felt whatever it was changed in her body. She knew it, she felt it when it dried up. Supernatural drying, praise God. Jesus immediately knowing in himself that virtue or power, dunamis had gone out of him, turned him about in the press and said, "Who touched my clothes"? His disciples said unto him, "Thou seeist the multitude thronging thee and sayest thou who touched me," and he looked round about to see her that had done this thing, but the woman fearing and trembling, knowing what was done in her, came and fell down before him and told him all the truth. And he said unto her, "Daughter, thy faith hath made thee whole. Go in peace and be whole of that plague".

Now, she'd had this thing for 12 years, so if she's made whole, then everything this disease had caused her over 12 years was now fixed. I don't care what it was, it's now fixed. If that had caused her not to have a family that's fixed. Everything, suffered many things of many physicians, had everything that had happened to her because of what different physicians had done to her body. Now, they did surgery back in those days. So whatever it was, man, it's fixed, absolutely fixed. Go with it, God. Thank you, Jesus. Now, she spent all that she had. So obviously, this woman obviously was a woman of means. She had been going to doctors for 12 years, but they not only messed her up, now she's broke. But the prosperity of God was released in her life because she wouldn't have been made whole. Jesus said, "Your faith made you whole". Thank you, Lord Jesus. Thank you, Lord Jesus.

Now, why did Jesus say, "Your faith has made you whole"? We know that it was the anointing. How God anointed Jesus Christ of Nazareth with the Holy Ghost and power, the knowledge, that was the dunamis that flowed out of him who went about doing good and healing. So he was doing good and healing that day, right? But notice, he didn't start this operation. She did. Now, think about it here. The spirit of God didn't say, "Stop right here, Jesus, because there's a woman I want to heal". No. What stopped him? Her faith, because he was aware of the power flow, but it would not have flowed had she not touched him. Huh? Hallelujah. Thank you, Lord Jesus. That is a very important fact. So her faith made her whole.

Now, what else do we know about her? Well, we know that faith doesn't work in an unforgiving art. So we know she's not holding anything against any of those physicians. What had she heard? Well, we know she heard the word because faith cometh by hearing and hearing by the Word of God. I just... "Jist". That's a good Texas word isn't it? I'm convinced that the word she heard is why she forgave. The word she heard changed her whole outlook on this whole situation. The word that she heard from the master, glory to God, changed her whole life before she ever crawled out there into that stream. And the word she heard stirred up her faith, Hallelujah, until the point she couldn't stay in the house any longer. But what if she had? Certain woman had an issue of blood 12 years, suffered many things and all she had when she had heard of Jesus, she came.

When she heard the word, faith came and then she came. She got up and got out of there against all the circumstances. Everything she saw was against her. She's bleeding. She doesn't have any right to be out in public with an issue of blood. There's Jairus right there behind Jesus. Of course, she knows who Jairus is. He's the leader of the synagogue. And this whole thing happened on the shame street of that synagogue in Capernaum. And Jairus is right there. They're headed toward Jairus's house, which is next to the synagogue, which is next to Jesus's house. And she sees him.

Now, number four, faith will not work in an unforgiving heart. Now, excuse me, we've talked about that some. Of course, we read it now in Mark 11:25. So let's look at that again. I had never noticed this until I heard Brother Hagin say it. In verse 25, when you stand praying, forgive, if you have aught against any, that your father also, which is in heaven, may forgive you your trespasses. But if you do not forgive, neither will your father, which is in heaven, forgive your trespasses. Now God is always disposed to forgive. Now then, she heard, she said, she did, she came and touched. Faith will not work in an unforgiving heart. We saw that in Mark 11:25. Galatians 5:6. For in Jesus Christ, well, there's a word, Christ.

Let's stop and translate and then meditate. For in Jesus, the anointed one and his anointing, neither circumcision availeth anything, nor uncircumcision, but faith which worketh by love. So in Jesus, in his anointing, everything that has to do with Jesus, everything that has to do with his anointing, and that anointing is in you, on you, amen, circumcision avails nothing. What does avail? Faith, faith, faith. Is faith of Jesus? Yes. Is the anointing of Jesus? Absolutely, which works by love. Well, of course it does. God is love. He doesn't have love. He is love. God is love. It is God's faith. Amen? Let's go over to First Corinthians chapter 13. Say it. Faith. Works. By love. Thank you, Lord.

13th chapter. Now, the 12th chapter is where the spirit of God, through the Apostle Paul, began talking about the manifestations of the Holy Spirit and how he works, how he manifests himself. And he talked about 12 manifestations of the spirit of God. Now then, coming into the 13th chapter, verse 31 of the 12th, but covet earnestly the best gifts. Yet, I show unto you a more excellent way. Though I speak with the tongues of men and angels, that is a very important statement. Though I speak with the tongues of men and of angels, and have not agape. I was curious for a long time, and I couldn't make up my mind. It didn't seem like I had anything that satisfied me. Why the old translators used the word "charity" and the Lord helped me with that. They were doing their best to portray selfless giving love, charitable love, a love that just wants to help everybody that's got any kind of problem. It's a charitable, it's a giving love.

Well, and too, over the last, a lot of years now since that was translated, the use and idea of the word charity has changed. Today, it's not nearly as important a word as it was back when that was translated. But you and I know what it's talking about. It's talking about the love of God. Though I speak with the tongues of men and of angels and have not love, I am become as sounding brass or a tinkling cymbal. Once we see that, now it's very simple here what's happened. God is love. He just talked about 12 manifestations of God, the Holy Spirit. All of these manifestations of the Holy Spirit have to have faith accompanying or it doesn't work in the first place. All that is not of faith is sin. Amen?

So it doesn't take but just a few seconds here to take a look at that, and go through that, and see what's happening here. Unforgiveness and all of the things that have to do with that, you may still be moving to operate in the gifts and so forth and so on, but we can see that there, faith, let me put it like this, which worketh by love. Say it like this, for faith worketh by God. It's God's faith. So when unforgiveness is present, he just chucked it away. That needs to be right up on top of the list. You judge yourself, you check yourself.

Now, we read Galatians 5:6. Let's go to Romans 5:5. And to me, this has always been such a picture of Jesus. Hope maketh not ashamed because the love of God is shed abroad in our hearts by the Holy Ghost which is given unto us. He has given us the commandment of love. We are commanded to love as he gave command. So how did he give commands? Love the Lord thy God with all your heart, all your soul, all your mind, and all your strength. Love your neighbor as yourself, fulfilling all of the law, and love the brethren even as I have loved the brethren. And then he gave you the love with which to do it, gave you the love with which to fulfill that command.