Kenneth Copeland - The Power of Travailing 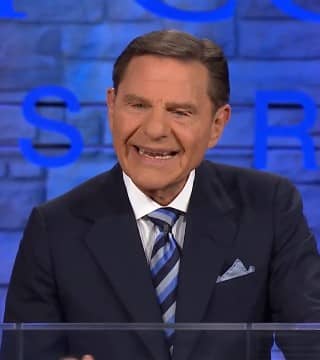 Now, open your Bibles with me to II Chronicles 7:14, a very familiar scripture. But I want to point out something here. II Chronicles 7:14, "If my people". He didn't say the whole state of California. He didn't say everybody in the United States. He said "my people". "If my people, which are called by my name, shall humble themselves, and pray, and seek my face, and turn from their wicked ways, then I will hear from heaven, I will forgive their sin, I will heal their land". Now, what does that mean, "my people"?

Well, in the book of Genesis, in the 18th chapter, let's just take time to look these up. Genesis, Chapter 18, "My people", starting with the 23rd verse, goes to the 33rd verse. 23rd verse, "Abraham drew near, and said, Wilt thou also destroy the righteous with the wicked? Peradventure, there be fifty righteous within the city: wilt thou also destroy and not spare the place for fifty righteous therein"? And you know what he did? He kept coming back at Him, he kept coming back at Him, he kept coming back at Him. And finally, "my people" turned out to be 10. Ten. He would have saved the whole place for 10. I'm a little disappointed that Abraham quit. If he'd have taken that all the way down to two, the outcome would have been different, I believe. But nevertheless, it wasn't everybody in Sodom, everybody in Gomorrah, it was 10.

Now then, also Ezekiel, Chapter 22. And notice in this one, Ezekiel 22:30, this is just really one of my favorites. "And I sought for a man among them, that should make up the hedge, and stand in the gap before me for the land, that I should not destroy it: but I found none". In this case, "my people" was one. If He could just find one "my people". Ha-ha-ha. Amen. Just one that had faith enough to stand up and stand in the gap, he would have honored one person. Well, there's certainly a whole lot more than that here tonight. And, of course, Matthew 18:18-20, in the New Testament, you're very familiar with that, but I want us to look at it, put it in your eyes, in your ears, because this is Jesus, the Master Himself. 18th verse, "Verily I say unto you, Whatsoever you shall bind on earth will be bound in heaven: and whatsoever you shall loose on earth will be loosed in heaven".

Now notice earth was first. Heaven can't bind anything on the earth. Men have to take the Word and the blood and the name and bind on the earth, and then heaven steps in. Amen. In both the binding and in the loosing. "Again I say unto you", so, obviously, Jesus had talked to them about this before. "Again I say unto you, If two of you shall agree on earth as touching any thing that they shall ask it shall be done for them of my Father which is in heaven. For where two or three are gathered together in my name, there am I in the midst of them". Amen. So in this case, "my people" is two or three. "Oh, Brother Copeland, you mean it's just two or three"? Yeah, well, now, I didn't say that. Jesus did.

Now, He said, "I will be in the midst of them". He is in the midst of us to carry out the agreement. That's His part. It's our part to agree. Well, what does it mean to agree? Start believing instead of hoping. Amen. Take a firm, solid stand, "That's the way it's going to be and none other". "Yeah, but it doesn't look like". I don't care what it looks like. I'm not going by that. I'm going by these red words. And remember what we talked about earlier tonight? There's blood backing this. Everything in this Book is blood backed, blood bought. The first half of this Book is backed in the blood of animals. The last half of this Book is backed in the blood of Jesus. Glory to God. You can't get any more powerful. Heaven is involved in this. Glory to God.

And I said, "Well, you know, I see that. Glory to God. That never crossed my mind before". Of course, they didn't have a clue. He said, "You don't have any idea what it's going to look like after it gets reborn". He said, "It's going to be as far from what you can see and understand now as it was then, a hundred years out from 1776". He said, "Sonny boy", when He calls me, "Sonny boy," I like that. He said, "Sonny boy, you ain't seen nothing yet". I'll tell you what, I want to be around long enough to see it, though, don't you? Oh, this thing is, and we're in it. We are in it right now, glory to God. One of the major, one of the huge, it's so big that it defies any kind of mental concept of it. When we dedicated that embassy in Jerusalem a major heavenly stake was put in Holy Ghost soil that can't be removed! And the healing of this nation took a giant step forward. And He started talking to me about the state of California. Amen. Oh, glory to God. Yeah. It's happening. We're in it! It's going on.

Then I want to show you Galatians, Chapter 4. This is insight into what the Spirit of God is talking to us about. Everyone in this room, everyone watching now, everyone in the sound of my voice, all of us are responsible for this. We all have a part to play in this. Our finances are connected to it. The welfare of our families and our homes are connected to this. This is not just a little political thing. No, no, no, no, no, no. This has to do with the most world-changing, the most impactful outpouring of the Holy Ghost and fire to ever hit this planet! Amen.

Those of you that follow Brother Hagin's ministry, you know that he began to pray in just about every meeting that he conducted. Somewhere in that meeting, he would start praying for manifestation of gifts of healings, manifestation of working of miracles and special faith, pray it for all the churches, and he just kept praying it and praying it, praying it, because the Spirit of God had laid that on his heart back in the early '80s. Well, he laid it on Smith Wigglesworth's heart a long time before that. And Mr. Wigglesworth, before he went home, said it would start in the '80s. Well, it started, glory to God. And here we are, we're working, I mean, we're about to jerk the bottom out of the bucket here. Great things are happening right now. I mean, great, marvelous things are happening right now.

Well, things like that are happening. I tell you, this is big stuff. It's huge. And we're in it. And that means that you and I are responsible for our part. This needs to be in our prayer life every day. This needs to be on our minds all the time. That's the reason it's so important to seek first the kingdom of God and let Him start fixing all that other stuff out there that's been getting in the way. Thank You, Lord. Hallelujah. Talk about it. Talk about it a lot. Talk about it when you come to church, talk about it when you get together. Don't be talking about all, I mean, "Well, what do you think about this"? I don't think about that. There's not anything wrong with sports. I mean, I played sports and all that, but I don't think about that anymore. I don't have time. It's wonderful. Amen.

A lot of powerful Christian people in that field, there's a revival and miracles going on in every sport arena going on right now. Amen. But there's something else going on. There is something else going on. Hallelujah. And the more you talk about it, the bigger it gets. Thank God. Look at this in 4:19. "My little children, of whom I travail in birth again until Christ be formed in you..." He was travailing in the Spirit for this church of people, travailing before the Lord, praying. How do you travail? You do it in the Holy Ghost. You travail for the state of California. You get in there and you travail, and you pray for the United States. Amen.

Spend time at it. Glory to God. And things will begin to happen in your own life and in your own ministry. There'll be stuff that the devil had planned for you that's just not going to take place. And you get to where you spend more than just a little time at this and praise and worship and just praise and worship and worship and praise Him and spend time before Him, just worshiping and praising Him for this great outpouring in the great state of California. Glory to God. Hallelujah. I thank You for it, Lord. Oh, I worship You, Jesus. I worship You, Jesus.

Listen, this stuff is contagious, my brother and sister. Amen. Stuff begins to happen. Do you ever get to where you think, "Everybody always talks about those miracles. Why aren't I ever there when they happen? Wonder why they never happen around me"? Are you conducive to it? It could that be they're happening around you, you just don't know it. But you get over in this travailing area, you get over here where you begin to pray in the Spirit for people. You begin to pray in the Spirit. If you have children in school, start praying in the Spirit for that school. Amen. Start interceding and travailing in the Spirit for that school. Hallelujah. Things can happen. Strange and wonderful things can happen.

When Terri was just a little girl, she got to praying in her school, and she started fasting her lunch, praying for the students in the school. Was it junior high school? Huh? Sixth grade. Amen. And so she starts fasting her lunch. And finally, it caught on. Other children were at the fasting table. Well, this stuff started happening. Amen. And, you know, to make a long story short, the principal came on the loudspeaker one day and said, "There'll be no more praying in tongues in the girls' restroom".

So these kids are all getting baptized in the Holy Ghost, and Terri started that by fasting her lunch! Amen. Just a little sixth grader travailing. Amen. Glory to God. Come on, come on, come on. All pastors need people in the church that are doing that, they're travailing for the Sunday schools, travailing for the youth department, and travailing before God, before God. "If my people, which are called by my name, shall humble themselves, and pray, and seek my face, and turn from their wicked ways then I will hear from heaven, I will forgive their sin, I will heal their land".