Kenneth Copeland - The Prayer of Agreement for Healing 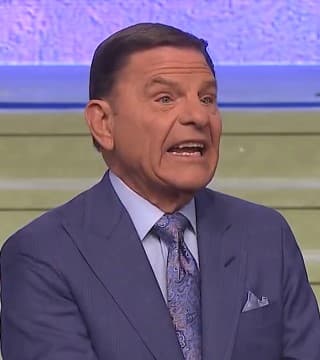 Open your Bibles to two different places: One, Romans 10; and the other, Mark 5. Romans 10:9, are you there? "If thou shalt confess with thy mouth the Lord Jesus," or that Jesus is Lord, "and believe in thine heart that God hath raised him from the dead, thou shalt be saved. For with the heart man believeth unto righteousness; and with the mouth confession is made unto salvation". All right, hold your spot and Mark 5. Now, would you, along with me, think that what we just read had to do with the new birth? Well, yeah, absolutely. And we would be correct in saying so.

Now, Mark 5:25, "A certain woman, which had an issue of blood twelve years, and suffered many things of many physicians, and had spent all that she had, was nothing bettered, but rather grew worse, when she had heard of Jesus, came in the press behind, touched his garment. For she said, If I may touch but his clothes, I shall be whole". Put a little mark, a little dot or something by the word "whole". Now, would you think she's talking about being saved or being healed? Well, actually, there's more to it than that. We find out she was broke, too. So she could've gotten healed and still been broke. She wouldn't have been whole.

See, "whole" comes from "shalom," nothing missing, nothing broken. All right. "Straightway the fountain of her blood was dried up; she felt in her body that she was healed of that plague. Jesus, immediately knowing in himself that dunamis had gone out of him," or power, "turned about in the press, and said, Who touched my clothes"? We know the story. She told Him all the truth. Verse 34, "And he said unto her, Daughter, thy faith hath made thee whole". The Greek word translated "saved," and "salvation" in 9 and 10 of the 10th chapter of Romans is exactly the same word translated, "whole," and "wholeness" in Mark 5. Exactly the same word. See, God doesn't see any difference. Amen.

Are you listening to me now? He was not raised from the dead until He had absolutely, completely, totally destroyed Satan's authority over mankind. It was completely, totally finished and wiped out. The moment He was raised from the dead, in God's eyes, Satan was finished. All sickness, all disease, all poverty, and all human suffering is the result of a terrible, horrible hatred for humanity. The devil himself is responsible for it, not God, and not Adam. Satan, he had no deceiver. He had no tempter. He was the anointed cherub.

Jesus is His name and is well represented in here today by the Spirit of the living God, the healer Himself, the creator Himself. Hallelujah. It belongs to you. The thing that hinders people receiving healing, or anything else for that matter, more than any other one thing, is not being totally, completely, absolutely convinced that it's God's will for you to have it. You can be agreeing and mentally assenting to it, but it has to come down to where you know it like you know two plus two is four and it's just the way it is. Even the government can't change that. Amen. And there ain't nobody in the government can keep you from getting healed this morning.

Now, I know the people that are right here in this room, I mean, most of you are members of this church, or part of this church, and you are well taught, but there is a lot of people out there, amen, that were wondering about this until just a few moments ago. Well, I want to tell you something, sweetheart. Today's your day. Yes, hallelujah. Thank You, Jesus. Praise God. And you can just check that out. The Greek word is "sozo". And David, would you hand me my phone where I brought that up this morning on the way to church? Thank you, sir. "To save, to keep safe, to make sound, to rescue from danger or destruction, to rescue one from injury".

Have you been injured? You're in the right place. That injury will be healed before you leave here this morning. Amen. You can just tell your sore foot, say this: "I feel good. I feel fine. Now, body, you get in line. To save the suffering one from perishing. Fourth stage leukemia, you're saved. Did you get it? To save one from perishing. Glory to God. Oh, I've got to tell you one that happened in Brother Billy's meeting. He laid hands on this person with last-stage leukemia. And she woke up the next day with blood everywhere. Her gown was filled with blood. The bed had blood all over it. She said, "I felt wonderful". But her daughter said, "Well, but still, maybe we better go check this out".

Well, they already had a blood doctor, you know, I mean a leukemia guy. They go, and he checks her out and he said, "There is no sign of leukemia in your blood". What happened to her? She got saved. She was already saved, but she got saved from death. And her daughter said, "Check the blood that's in her gown". It was full of leukemia. Did I tell that right? Now, God has healed untold millions of people with leukemia, but hasn't done that many times, where He just gives you a blood transfusion, where you could just go tell everybody. Amen.

Now, why did that happen? Because that's the time we're living in. We have crossed over the line, my brothers and sisters. We're in a special place right now. Hallelujah. And we've been looking towards this. Brother Hagin began to pray about this publicly, about signs and wonders and special faith and miracles. Amen. And he prayed it at the close of almost every service, year after year after year after year. It had been prophesied that it was going to hit in the '80s, and then in the mid '80s.

And I fasting and praying in January 1983, and the Lord began to talk to me about it. He said, "You start interceding now for the outpouring. You begin to confess it. You begin to stand on it". Well, we did. I thought it was going to be that year. Well, some of it did that year, but we just keep on and just keep on, and just kept on and just kept on. And then, not all that long ago, the Spirit of God spoke to Benny Hinn and said, "It's coming. It's right at the door". He's talking about these kinds of signs and wonders, things that just scream to the natural world, "I'm here! I'm here"! And he said, "The sign that it's in full motion is when Oral Roberts and Billy Graham go to heaven".

Now, Brother Roberts went several years ago. And as everybody knows, He's home. Turn with me to the 18th chapter of Matthew, "Verily I say unto you, Whatsoever you shall bind on earth shall be bound in heaven; and whatsoever you shall loose on earth shall be loosed in heaven. And again I say unto you", so He'd taught this before, "Again I say unto you, If two of you shall agree on earth as touching any thing that they shall ask". He just got through telling them how they're going to operate their ministries after He's gone. This is the way you get your money. This is: hey, two or three in agreement on the Word of God constitutes spiritual law in any situation. It has to come to pass. It can't be any other way.

Think what they learned that day. And evidently, this is the second time He'd been over this, at least the second time, because He said, "Again". He might have done it again and again and again to get through to them how important it is, number one, to stay in agreement. Don't get out of agreement. Don't get into strife with one of us or with anybody else. And when you've got somebody that's in strife, that's what He just got through teaching there, and he won't listen to you, and then he won't listen to somebody else, then he won't listen to the church. Get him out of your prayer life. Amen. He didn't say, "Get him out of your life". He said, "Get him out of your prayer life where his foul disagreement with you doesn't keep you from receiving from God what you need in the areas of your life that need this kind of strength and power in your ministries and so forth".

Get that guy out of your prayer life until he can repent and the Lord can get through to him. And a whole lot of the time, that person is going to hit the wall big time. And when they do, you don't want them messing with your prayers. Now, since there was a child there, that indicates to me there was a mother there. Somebody's wife and mother was there. And so they're hearing about staying in agreement. He's still got this little guy standing right there next to Him. He's still hugging up Him. The whole time He's teaching this, He's holding this little guy, right in the midst of it all. And He's telling that little fella's mama, "You and your husband better keep it straight, because the two of you can agree as touching anything you ask, and it'll come to pass". Hallelujah.

Can you see it? Hallelujah. Isn't it wonderful? Oh my goodness. He lays in this firm principle. Whatever you bind on earth is bound in heaven. I want to tell you something. Until you bind it, Jesus can do nothing about it. And where two or three of you... now, we've used this. Well, you know, we could say this morning, "Well, glory to God. Jesus said where there are two or more gathered together, there am I in the midst". Well, yeah, actually, that's true. But that's not what He was talking about here. He is saying, "Where any two or three of you will agree as touching anything that you ask I'm there to carry out the agreement".