Kenneth Copeland - Faith Is a Currency 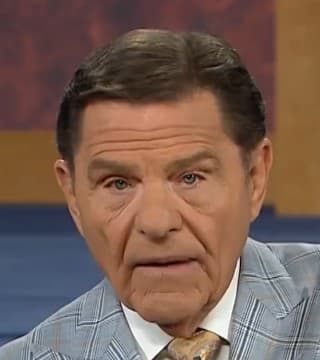 Mark 11:22, "Jesus answering said unto them, Have faith in God". Now, from now on, when you see that, you say, "Have faith in God, Who is love". So I'm going to have to have faith in the love. I just read you the 16th verse, the 4th chapter of I John. He said, "We have known and believed the love that he has for us. Believed the love". We're going to get further into that before this meeting is over. "For verily I say unto you, Whosoever shall say unto this mountain, Be thou removed, be thou cast into the sea; and shall not doubt in his heart, but shall believe those things which he saith shall come to pass".

Well, I must go over this again, particularly for the benefit of those that are online and those that are just coming to begin to study faith and so forth. I want you to notice where Jesus put the emphasis. "Verily I say unto you, Whosoever shall say unto this mountain, Be thou removed, and be thou cast into the sea; and shall not doubt in his heart, but shall believe". Okay, there's one "believe". So we've got one "say," and one "believe that those things which he saith...", two "...shall come to pass; he shall have whatsoever he saith". So where did He put the emphasis, on the believing? No, on the saying. You can be believing and not say it, and you haven't released the faith.

Faith is like money, you've got to spend it for it to work. Amen. And so He put the emphasis on the "saying" part. "Believe it in your heart". But then once you believe something in your heart, you're going to say it. Amen. Because out of the abundance of the heart, the mouth speaks. So, say it, say it, say it. Believe it. And, what are we believing? "Well, I believe the Bible is true". I mean, that's wonderful. I'm glad you do. But that don't work here. That's not what He's talking about. "Well, I believe Jesus is my Lord and Savior". That's wonderful. That's the reason you're born again. But that's not what He's talking about here. He's talking about spiritual law. He's talking about the spiritual law of faith.

Don't you remember that from the book of Romans, "By what law? Of works? No, but by the law of faith". This is the beginning of spiritual growth. Did you know you can't grow, spiritually without growing your faith? Your faith is going to have to be growing before you grow spiritually at all. Here you get back over into that mental assent stuff. And that won't grow you. That won't mature you at all. So, think now, and float with me. "Have faith in God," Who is love. "Believe in your heart those things which he saith shall come to pass; he shall have whatsoever he saith".

The beginning of spiritual growth is when you realize and have revelation of the fact that these are spiritual laws. This is not, "sometimes it does and sometimes it doesn't". You see, a Spirit, Who is God, created all matter. And it was the spiritual force of faith released in His Word by the Holy Spirit, then all matter came to be. Now, that released into being physical laws. Say it, "The laws of physics". Laws that govern the physical realm were created by higher law that governs the spirit and physical realm. We were born from above. Jesus was born from above. Are you listening to me?

The new birth comes to pass because of the spiritual law that governs it. Simply put, you believe in your heart, huh? Not the mind, not the head. You "believe in your heart that God raised Jesus from the dead, and you confessed with your mouth Jesus is Lord! For with the heart man believeth unto righteousness. With the mouth confession is made unto...". That spiritual law released performed the greatest miracle known to heaven and earth, the new birth of the human spirit; re-created a spirit being. You can't do that but He did. You know why? Because it happened to Jesus first. The Scripture says He was manifested in the flesh.

When was that? Bethlehem. That wasn't the day He was born. That was the day He was manifested in flesh. But He was made alive in the Spirit. That happened in hell where He suffered. He was made to be sin. He didn't sin. Don't you go tell somebody, "Brother Copeland said Jesus was a sinner". I'll forgive you, but it may take me another 30 seconds. No. No. He was made to be sin. He never committed sin. I never committed righteousness. He was made sin with my sin. And thank God, the moment I received the new birth, I was made a new creature. And I received His righteousness.

Now, if you wanted some goosebumps, that should have done it right there. In fact, what is it Brother Moore said? Ha-ha-ha. "My goosebumps is double-parked, brother". Hallelujah! That's when He was born again. He's the first... say, "First". Not the only. Say it, "Not the only". "But the firstborn from the dead". "And again, when he bringeth in the first begotten, and again, he will be a Son to me, and again, I will be a Father to him". For the biggest part of three days and nights, Jesus was lost in the pit of hell, suffering there for the likes of you and me. Love did that for you. Don't you ever forget it. Amen.

But you can read in the 1st chapter of Hebrews what happened. I mean, the Word of God, that all the angels of God worship Him. Amen. God called Him "God". Those words went down into the bowels of this earth, into the deepest part of hell. No man but Jesus has ever borne all of hell. That would be unjust. But Jesus bore it all because He bore all sin, all sin. I said all of it. Amen. All of it. And when Satan thought he had Him wiped out, read it in the 22nd Psalm. It's described in the 22nd Psalm. And in the Hebrew text, it begins with "My God, my God, why hast thou forsaken me"? And it ends with, "It is finished".

There are no words in the human vocabulary to describe. He didn't look like a man anymore. He was so twisted and marled, He didn't look like a human! That began while He was still hanging on that cross! But, all of a sudden, those words, the power of the Spirit of the living God! The one who hovered over little Mary! And a holy thing was conceived. That same Holy Ghost hovered over Him in hell! And a new holy thing was born. He was born again. One born-again human man defeated all of hell by Himself"! That's our big brother! We have his spiritual DNA! We've got the same Holy Ghost! We have a measure of the same faith! Oh, God. Hallelujah! All of a sudden, that emaciated, scrawny, suffering, unrecognizable Spirit of a miserable lost human being began to get up. That's all it took. I mean, demons bouncing off the walls of hell. Whew. That place shook. In the upper region of Sheol where paradise was.

See, the Scripture paints a picture in the book of Hebrews. Adam's sin went all the way to you, but not including the throne of God. Jesus said, "No man had gone up to heaven". Now, that refers to "no man", talking about men and women, "...had died and gone to heaven". Two men have gone to heaven, but they haven't died yet. They're still in their natural bodies. Well, they're not now, but they were then, because they got born again when Jesus raised from the dead. Amen. No, sir. No, sir. I said it right the first time. They still have their physical bodies. They haven't died yet. They're going to, the two, Enoch and Elijah. Ain't that sweet?

But see, up until then, the Scripture says the heavenly utensils of worship had to be sanctified with the blood of Jesus. Heaven wasn't fit for men in God's view. It was not perfect. That's shocking, isn't it? But it's true. So what was the bosom of Abraham or the upper region of Sheol or hell? I said, "Lord, you're going to have to help me with this. I'm struggling with this". And now, I said this like it all happened in about 10 minutes. What I just said, I said over a period of about 35 to 40 years. And He was helping me as time went by. But there was a moment that He just really opened my eyes to it.

And at that moment, He said, "Kenneth, don't allow your natural mind to put the confines of the center of the earth around that," upper region of hell which is at the center of the earth. Oh, okay. He said, "Kenneth, in the Spirit, I can put the state of Texas in a clothes closet". He said, "You could walk into your closet to pray and all of a sudden have an open vision of the whole state of Texas or the whole United States, and it would be so real you, when you came back to yourself, you would think, 'I have been there.'" And He said, "In the Spirit, you would have been there".

I think I began to see what He was talking about. It's like, compare it, I'm trying to come up with something the mind can get hold of. Compare it to a hologram. A hologram is three-dimensional. Now, come on, all of you saw Star Wars. What's the matter with you? Well, paradise was a mirror of heaven itself. They were in heaven. They were actually located in the upper region, the protected region of hell where there was no suffering, there was no torment. But you remember when Abraham spoke to the rich man in hell? Now, how did that happen?

Abraham was looking into hell through a spiritually allowed portal. All those folks were not looking into hell. No, no. No, no. That's the reason you don't get much revelation of it in the Bible. You get less than that revelation of heaven because you get to looking at that, and it makes you want to go now. And you have every right to go now. You've already been lifted up and seated with Him in heavenly places. And the Scripture very simply says you are a citizen of heaven right now. Right now. Your spirit is seated there right now. And the more you get your heart and mind on heavenly things, the more powerful you become.